The not-so-wise ‘owl’: Antonín Sova and the ‘covetous dotard’

As Shrove Tuesday approaches, a search through the British Library’s holdings reveals many examples of carnivalesque humour. Among these is a volume published in Prague around 1900, Balada o jednom člověku a jeho radostech (‘Ballad of a man and his pleasures’) by the Czech poet Antonín Sova (1864-1928). Rather like a livelier and less ghoulish Christmas Carol, it recounts the protagonist’s encounters with the spirit of Carnival and other strange apparitions, vividly illustrated by František Kupka. 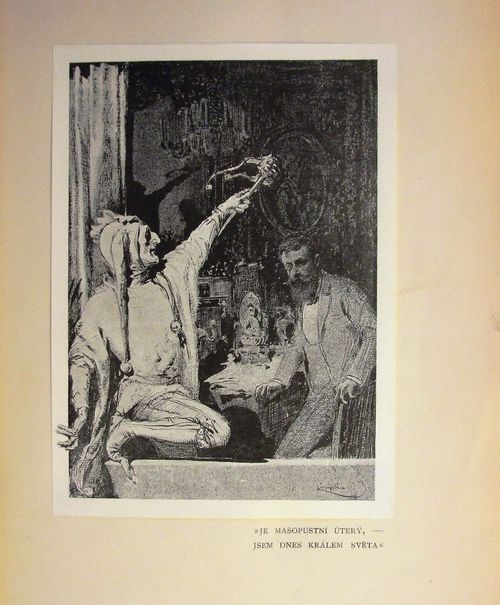 Sova’s own birthday (26 February 1864) fell around the time when such wild celebrations usually occur, and his career progressed accordingly. Rarely can a poet have borne a less appropriate name (Sova, in Czech, means ‘owl’), and despite the scholarly spectacles with which he appears in a photograph from 1914 by František Drtikol, wisdom was never his outstanding characteristic. 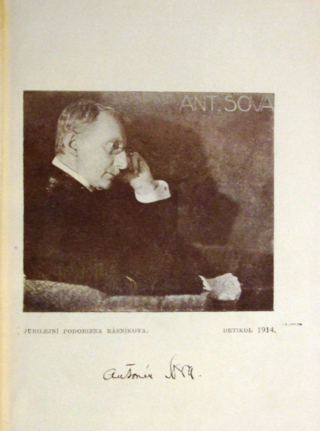 Even at school Sova acquired a reputation as a rebel whose misdemeanours included sporting a Czech tricolour tie in a public park. Nor did he find it easy to hold down a job; when lack of funds prevented him from completing his legal studies, he flitted from an editorial post on the famous Otto encyclopedia after only a year to a clerical job in the municipal department of medicine before ending up in 1898 as director of Prague’s Municipal Library, where he stayed until he retired.

However, he had quickly made an impression on influential writers including Adolf Heyduk and Jaroslav Vrchlický, who helped him to publish his poetry, and from 1890 onwards he brought out volumes of verses, novels and short stories. While his poetry frequently dealt with themes of love, his fiction addressed social and psychological themes, and reflected his increasingly radical political views.  Together with fellow-Symbolists, he was a founder member, in 1897, of the Máj group, the first official Czech writers’ association. However, that year also saw an episode in which he put his poetic gifts to far more reckless use.

In 1894, the Omladina Trial, held in Prague, convicted 68 Czech Nationalists of radical activities and drew attention to Czech anarchism and anarcho-syndicalism. Sova, an outspoken supporter of their cause, was incensed when the German historian and politician Theodor Mommsen published an article, ‘An die Deutschen in Österreich’ (‘To the Germans in Austria’), in the Vienna newspaper Neue Freie Presse (issue 11923, 31 October 1897) in which he referred to the Czechs as ‘apostles of barbarism’, and claimed that ‘the Czech skull is impervious to reason, but it is susceptible to blows’. The infuriated Sova responded by penning a retort in verse in which he attacked the Prussian professor in the most immoderate terms, calling him a ‘covetous dotard’  with ‘turgid Neronic lips’, an allusion to his most famous work, the Römische Geschichte. Far from detracting from his reputation, this outpouring caused Sova to be regarded as the leading poet of Czech nationalism; having described Mommsen as ‘on the brink of the grave’, he was no doubt gratified when he arrived there in 1903, and when, just over twenty years later, the independent Czechoslovak state came into being.

Sova’s lack of wisdom had other consequences; his marriage to a much younger woman broke down within a few years, and he contracted a disease (probably syphilis) which left him paralysed for the latter part of his life. However, his home in Prague was a magnet for a younger generation of Czech poets, and his writings are a lasting testimony to the vigour and vehemence which characterized the struggle for national autonomy and which ultimately achieved its success.