‘Tonight put on perfection…’: the Valentine’s Day wedding which gave us the Georgians.

In February 1613 London was en fête in preparation for a royal wedding. A pageant on the Thames, mock sea battle and firework display in which St. George fought a dragon which exploded with a roar and vanished were staged to precede the great event: the Princess Elizabeth, eldest daughter of James I, was to be married to Frederick, the Elector Palatine.

Although the bride’s mother, Anne of Denmark, had initially looked down on this Protestant match and predicted that her daughter would be known merely as ‘Goody Palsgrave’, she was gradually mollified, and on Sunday, 14th February  she gathered with the king and the court to witness the ceremony in the chapel of the Palace of Whitehall. The 16-year-old princess, dressed in cloth of silver and adorned with pearls and diamonds, was given away by her father to a bridegroom clad in silver and capable of pronouncing his vows in a service conducted wholly in English, although the young couple normally conversed in French.

The wedding was the occasion for a masque designed by Inigo Jones  featuring Native Americans, small boys dressed as baboons, and a water pageant representing the ‘Marriage of Thames and Rhine’, organized by Sir Francis Bacon. Literature, too, was not forgotten: Shakespeare’s company, the King’s Men, presented ‘before the Princess Highness the Lady Elizabeth and the Prince Elector Palatine fourteen several plays’ including The Tempest, and poets and ballad-makers composed numerous epithalamia, the most famous of which was John Donne’s Epithalamium on the Lady Elizabeth and the Count Palatine being married on St. Valentine’s Day . 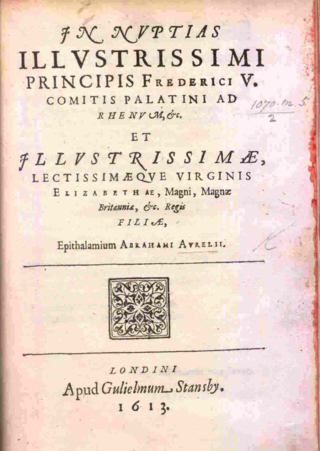 The choice of date for the union of ‘these young turtles that were coupled on St. Valentine’s Day’, as the bride’s father described them, proved auspicious. The arranged marriage developed into an exceptionally happy one, despite the vicissitudes which they were to encounter. On New Year’s Day 1614 Elizabeth produced her first child, a son, whose arrival was celebrated by the Scots poet John Forbes in a Latin ode. 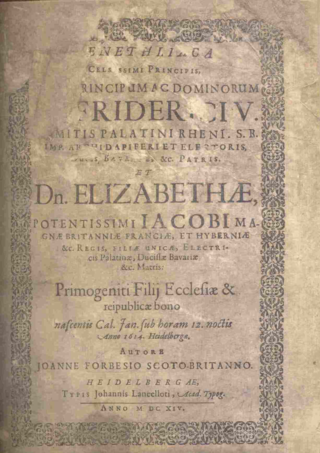 Even before the wedding it had been rumoured that Frederick might soon rise in the world. King James disclosed to the Spanish ambassador that he might do so  ‘in respect of the crown of Bohemia, because they pretend it to be elective’. This came to pass in October 1619, when the new King and Queen of Bohemia ceremonially entered Prague, welcomed by the townspeople and four hundred Hussite  peasants rejoicing at the replacement of the Habsburg oppressors by a Protestant monarch. Crowned in St. Vitus’s Cathedral and lodged in the palace of Hradcany, the couple delighted their new subjects when, two months later, the Queen gave birth to a son, her third, named Rupert in honour of an earlier Elector Palatine. Yet within a year the Thirty Years’ War had broken out and, with a Bavarian army advancing on Prague, the ‘Winter King and Queen of Snow’  were forced to flee with such haste that the infant prince was almost left behind and was hurriedly thrown by a courtier into the back of the departing coach.

James I, attempting to negotiate a Spanish marriage for the Prince of Wales, felt unable to offer a refuge to the fugitives and their family (which finally numbered eleven), and in April 1621 they fetched up in The Hague as guests of a distant relative, the Prince of Orange, which became their permanent home. The defeat of the King of Sweden, Gustavus Adolphus, at the battle of Lützen on 6th November 1632 dealt Frederick a blow from which he never recovered, and on 19th November he succumbed to the plague, leaving his wife bereft of ‘the best friend that I ever had, in whom was all my delight’, as she wrote to her brother Charles I.

Determined to stay and fight for her eldest son’s right to inherit, Elizabeth did not return to London until 1661, after the coronation of her nephew Charles II, in her 66th year. Here, before removing to Exeter House, she was the guest of William, Lord Craven, who had generously supported the Stuart cause for many years, leading to the sequestration of his Berkshire estates. With the Restoration, these were returned to him; he owned a splendid house in Drury Lane, and he and Elizabeth were often seen together at the theatre, leading to rumours that they had contracted a secret marriage. Although this is unlikely, the Earl undertook the building on his estates at Ashdown of a house in the Dutch style as a hunting lodge and refuge from the plague. The British Library possesses an engraving (pictured below) by Knyff and Kip (Maps K.Top.7.42) of ‘Ashdowne Park in the county of Berks’, which came to the Library  from  George III’s collection in 1829. 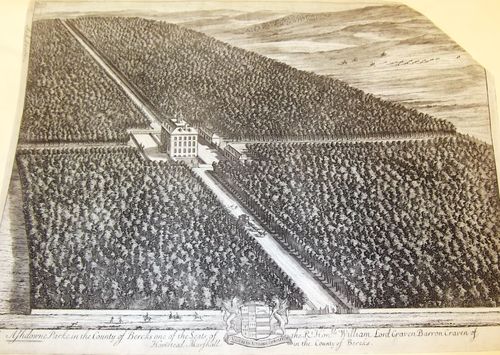 Ashdown House is now owned by the National Trust, and one can imagine, walking through the park on a fine spring day in agreeable company, the pleasure that Lord Craven found in planning it to delight his guest. Sadly, Elizabeth never saw the building; she died in 1662 before it was completed, but not before, in June 1660, her youngest daughter Sophie, Electress of Hanover, had given birth to the future George I, founder of the Hanoverian dynasty.