Aesop’s fables are not kids’ stuff 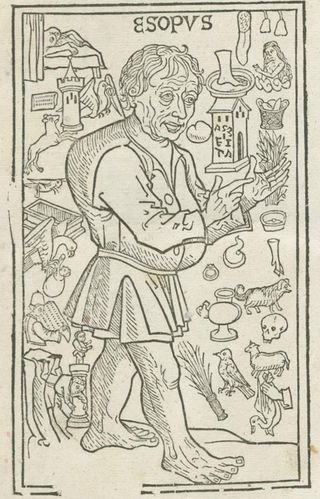 The sight of this 1480 edition of Aesop’s fables in the ‘Printing’ section of the newly revamped Sir John Ritblat Gallery: Treasures of the British Library here at St Pancras leads me to ponder some long-standing conceptions or misconceptions regarding Aesop as a book for children.

Nowadays we tend to assume that Aesop is for children on the basis of two received ideas: that animals appeal to the infant mind and that illustrated books are for a juvenile audience. Both these ideas do indeed have historical precedent (what I once heard a museum curator refer to as ‘time-depth’): in the prologue to John of Capua’s Directorium humanae vitae (ultimately derived from the Panchatantra) we are told that ‘the sages met together and decided to make a book and adapt it to the language of birds and beasts, for three reasons. First, to discover the sources of wisdom. Second, this book is for knowledge and play: the wise man will learn because of its wisdom and the fool will derive entertainment. Third, because children, and those who delight  in hearing parables and childish words, will take pleasure in learning and their learning will be made easier by the sweetness of the words and the sight of figures and images.’ (The original Latin text is here.)

Animal fable was also associated with humour, and on occasion this is linked with the stigma of being lightweight: Seneca recommended that his friend Polybius should gather ‘the tales and fables of Aesop’ [fabellas quoque et Aesopeos logos] as an exercise in ‘the lighter kind of literature’ [haec hilariora studia] to distract him from his grief [Ad Polybium 8.3]. When the French Jesuit François Vavasseur dignified fable with critical attention in the 17th century it was in the significantly named De ludicra dictione (Paris, 1658; British Library 88.k.11.(1.)).

If we look inside the edition of Aesop displayed in the gallery, with the aid of the online facsimile made from a copy in the Bavarian State Library we will find tales which are of the earth earthy: did you hear the one about the new wife who complained about her husband because he didn’t measure up to the donkeys she was used to seeing on her parents’ farm? Or see the pictures of bodily functions such as this one: 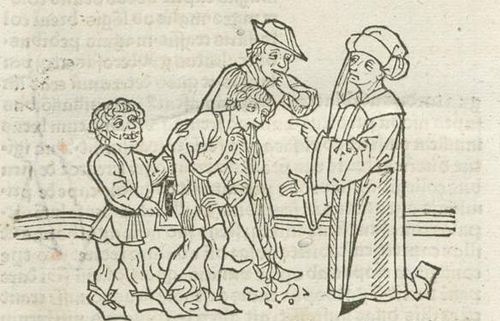 The message of other fables is one of Realpolitik: the animals take revenge on the lion once he is old and weak: 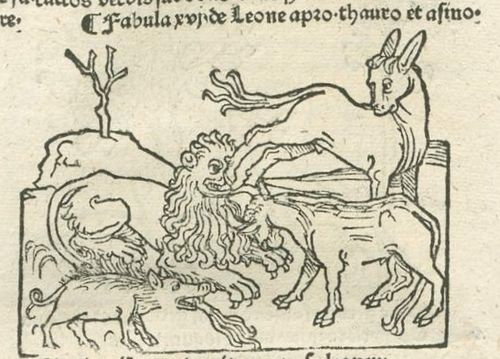 Young readers might also be disappointed to find the fables couched in Latin elegiac verse.

Fables in one sense are the most naked of fictions, telling of the plain absurdity of talking animals.  But this impossibility alerts us to the fact that pleasant (and sometimes unpleasant) fictions can enclose a hard truth for the alert and adult reader.