How English is an English proverb?

Paremiologists generally agree that the same proverbs occur in many languages. It’s often assumed that popular proverbs, like folktales, in Max Müller’s phrase, migrate.  And migration is assumed to be by word of mouth.  All of which is probably true.

But some popular proverbs were written down in the manuscript period (see Morawski for French examples), sometimes with Latin translations:

Some proverb books were printed in the incunable period. But the watershed was the appearance of Erasmus’s Adagia, which he issued in ever more expanded editions between 1500 and 1536.

The Adagia were very much focused on the classical tradition.  Though an athlete of Latinity – he never published anything in the vernacular – Erasmus did sparingly admit Dutch proverbs (suitably rendered into Latin) into the Adagia, as parallels for Greek and Roman examples. His role in proverb studies, as in many other fields, was crucial. In Catholic countries like Spain his influence was far-reaching but his name was mud. The Humanist Pedro Vallés in the prologue of his Libro de refranes (Zaragoza, 1549; British Library C.63.b.25) pays homage to Erasmus:

[Among the Latins, Erasmus ordered proverbs, and most learnedly … With the Adages of Erasmus, for which work he won everlasting fame]

In the copy which was used for a 1917 facsimile edition (12304.h.36.), the emphasised words are struck through.  The British Library copy of the original has not fallen into the hands of the censor, and there they can be read clearly.

Around the 1540s collections began to appear which juxtaposed not vernacular with Latin but vernacular with vernacular.  For some minority languages this was their first appearance in print: students of Galician are indebted to Hernán Núñez, professor of Greek at Salamanca, who in his Refranes o proverbios en romance (published posthumously in 1555) paralleled Castilian proverbs with Galician.

So, what of the authenticity of English proverbs?

The Oxford Dictionary of English Proverbs (ODEP) from 1935 onwards includes a good number of English proverbs that were never said by any Englishman.  These are garnered from bilingual and multilingual collections, or vocabularies and phrasebooks in which the English is merely a translation from French, Spanish or Italian.  The Introduction claims: ‘many proverbs of foreign origin were quickly absorbed into English life and these have a rightful place in an English dictionary’.  (For dictionaries, phrasebooks etc. a useful source is Alston.)

One example among many of an interloper is ‘Honour and profit lie not in one sack’.  ODEP (p. 382) cites:

1599.  John Minsheu, A Spanish Grammar, 84: Honour and profit are not contained together in one sacke.

Cited only in bilingual or multilingual sources, this is the Spanish ‘Honra y provecho no caben en un saco’. 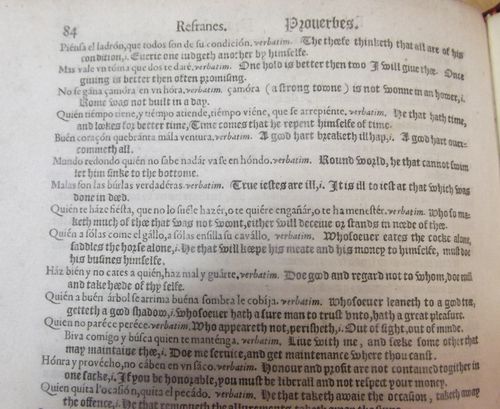 So, proverbs do probably migrate, but a lot of English proverbs in the reference books are foreigners in disguise.  Remember: All that glitters is not gold – No es oro todo lo que reluce.