It may seem perverse to celebrate the centenary of a poet’s death, but for those who would prefer to mark a more joyful event in the life of Frédéric Mistral, Provence’s greatest poet, 2014 offers two: 110 years since he was awarded the Nobel Prize in 1904 and  on 21st May,  the 160th anniversary of the establishment in 1854 of the literary and cultural association Félibrige. 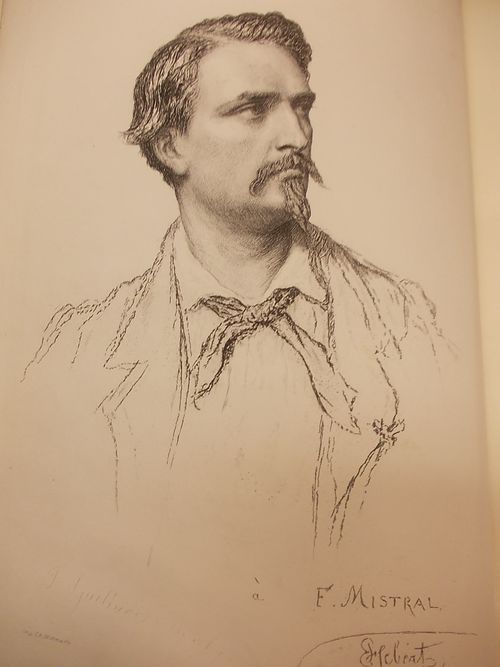 Frédéric Mistral was born on 8 September 1830 at Maillane in the département  of Bouches-du-Rhône into an old landowning family deeply rooted in the soil of Provence. A reluctant pupil, his frequent truancies caused his exasperated parents to pack him off to boarding school, but neither this nor his legal studies at Aix-en-Provence weakened his profound love of his native region, or of the Occitan language. With the encouragement of his teacher Joseph Roumanille, he joined five other poets, Teodor Aubanel, Ansèume Matiéu, Jan Brunet, Anfos Tavan and Paul Giera, to found an organization devoted to the promotion of the ancient Occitan language at a time when the growth of railways and modern communications threatened its very existence as standard French was imposed throughout the country.

Perhaps the greatest achievement of Félibrige was its publication of Lou Tresor dóu Félibrige (1878–1886), which remains the most comprehensive and exact dictionary of the Occitan language, and one of the most reliable for the precision of its definitions. The British Library holds the first edition of Mistral’s two-volume work (12952.h.7), an Occitan-French dictionary covering all the dialects of oc, including mistralienne.

Mistral, however, was no dry pedant. Although he was notable for spending years on the writing and revision of his poems, the finished works possess a vivid freshness and sense of place which rapidly brought them to the eyes of a wider European public. His most famous poem Mirèio (Mireille), published in 1859 after eight years of effort and dedicated to Alphonse de Lamartine, achieved immense popularity; it was made into an opera by Charles Gounod (1863), and in 1867 ‘an English version, the original crowned by the French Academy’ by C. H. Grant was published by  Joseph Roumanille at Avignon (11498.c.46). The story of the young heroine’s thwarted love for Vincent, a poor basket-maker, whom her parents force her to reject in favour of a wealthy suitor, takes place amid the picturesque landscape of the Camargue, with colourful evocations of its landscape, people and customs, reaching a climax when Mireille makes a pilgrimage to Saintes-Maries-de-la-Mer to implore their assistance and, having set out without a hat, dies of sunstroke in Victor’s arms under the eyes of her remorseful parents. Its emotional directness and wealth of exotic detail gave this moving tale an appeal which quickly caused it to be translated into many other languages, including Esperanto. 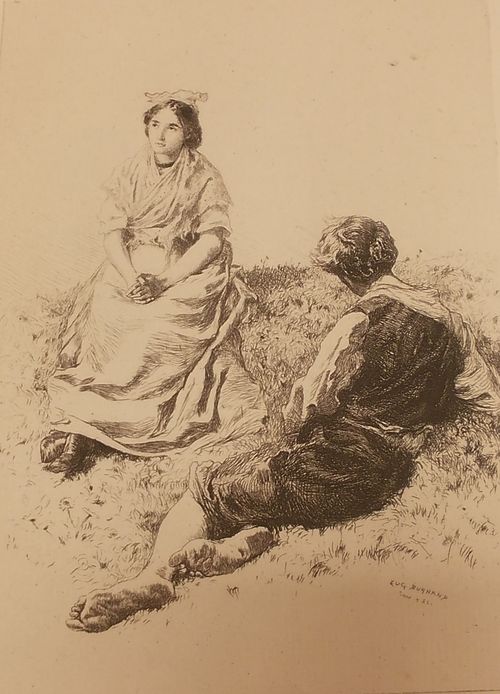 For many English readers their first encounter with Mistral may have come through reading Alphonse Daudet’s Lettres de mon moulin (1869), in which the chapter ‘Le poète Mistral’ describes a visit to his old friend on the occasion of the local fête. Against a background of the celebrations, with the traditional bull-running, music and sports culminating in the dancing of the farandole by night under the lanterns to the strains of fife and drum, Daudet describes Mistral reading from the exercise book which contained the manuscript of Calendal, the picaresque poem which he had just completed after seven years’ labour. The account ends with the tribute of one great author to another as a poet and as the man who had saved a rich and ancient language from decay. Daudet likens Mistral to a peasant’s son who discovers one of the great houses of Provence in disrepair, and, like Christ in the Temple, drives the grazing donkey and pecking hens out of the cour d’honneur and sets about restoring the glass and panelling, re-gilding the throne, ‘and put on its feet the vast palace of former times, where popes and empresses lodged.

‘That restored palace is the Provençal language.

‘That peasant’s son is Mistral.’

In 1904 Mistral shared the Nobel Prize for Literature with the Spanish playwright José Echegaray. Fittingly, as he had received it in recognition of his efforts to revive and restore the Provençal language, Mistral used his portion to set up the Museon Arlaten (Musée d’Arles), which remains the most considerable collection of Provençal folk art, including costumes, farming tools and musical instruments, pottery, textiles and furniture reminiscent of the world of his poetry.

Living in an unpretentious style, refusing to use the prize which he received for Mireille from the Académie Française  to decorate his simple plastered bedroom as his mother suggested, Mistral died on 25th March 1914 in Maillane where he was born. Although he had no children by his marriage to Marie-Louise Rivière, he gave his native Provence some of its best-loved literary characters, and a priceless legacy in the renewal of its historic language.