The popular literature that flourished in Spain from the first days of printing until the early 20th century was known as literatura de cordel, because the material for sale was displayed hung on cord or twine.  One of the most widespread formats of this literature was the pliego suelto, the equivalent of the English chapbook. The texts were in verse, later in prose, usually illustrated with simple woodcuts.  The visual element was hugely important among a semi-literate population, even though the illustrations were often recycled and so did not always fit the story exactly. The paper was of the cheapest quality and the printing similarly poor.  Relatively few pliegos have therefore survived from among the many thousands printed.

The British Library and Cambridge University Library hold between them more than 4,700 pliegos dating from the 18th to the early 20th centuries. These have now been digitized and are being fully catalogued as part of an AHRC-funded research project on the representation and perception of wrongdoing in 19th-century Spain. Many recount tales of crime and violence, banditry, elopements, adultery and bloody revenge, generally ending in arrest, repentance, execution and, occasionally, salvation. These works take the form of romances (ballads), jácaras (ballads of low life) and relaciones (accounts of events).

Although more learned literary works were among the earliest pliegos, the format is largely associated with popular literature, and increasingly so from the 17th century onwards. The subject matter was not restricted to crime and violence, but embraced the lives of saints and Biblical figures, miracles, monstrous creatures, natural disasters and historical and current events. Non-narrative works, such as highlights of plays, satirical and burlesque verse, and love poems were also offered for sale.

However, there was an enormous appetite for sensational accounts of crimes and acts of violence, and certain popular ballads were reprinted over and over again. They told of both real and fictional events at a time when the ability to distinguish fact from fiction was underdeveloped among a population of whom barely 20% were literate. The pliegos thus served as a source of both entertainment and information. The latter role increased in importance as the century advanced and equally sensational accounts of actual crimes circulated. Much the same phenomenon occurred in Britain in the same period even though literacy levels were higher.

Tales of women assaulted and abandoned in wild places were frequent subjects of the pliegos. Among the most frequently printed was the tale of wretched Rosaura of Trujillo. She elopes with her lover, accompanied unexpectedly by his evil male cousin. The pair ride off with her into the Sierra Morena where Rosaura is abandoned after being stripped, tied up and (we assume) raped. After three days she is discovered by a huntsman who takes her back to civilization. The lover and cousin are duly caught, tried and executed, and Rosaura withdraws to a convent. The British Library and Cambridge UL hold between them 16 editions, while yet more exist in other libraries, printed in different years and in various places, although many bear no date or place of publication. 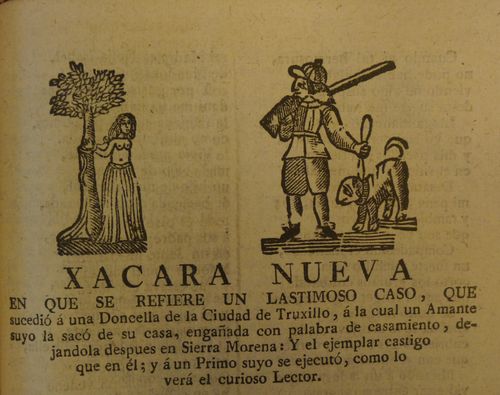 Rosaura of Trujillo, from an undated edition printed in Barcelona by the heirs of Juan Jolis. British Library G.11303(36)

A story in similar mould is told of Doña Fénix Alba, who was also abandoned and left for dead by her lover, and also eventually rescued by a huntsman. Doña Fénix, however, had first been saved by a lion which, after killing the lover, cared for her for six years in its cave. Unfortunately, the huntsman shoots the beast dead to save his own skin.

The ‘Ripper Streets’ of Madrid

The tale entitled ‘El Maltés en Madrid’ tells how this gallant gentleman from Malta cheated death at the hands of a skilled femme fatale and her three male heavies. The woman dupes him into entering her house where the gang proposes to rob and kill him. However, the Maltese outwits them with the aid of his resourceful servant who summons a soldier friend and three grenadiers. The gang is overpowered and three bodies are then discovered preserved in salt, plus six more desiccated corpses. The second part reveals that they had already robbed and murdered twenty-six men and a child. Arrested, they confess under torture. Repentance is followed by swift exemplary punishment: all four are hung, drawn and quartered, and their unfortunate servant girl is tarred and feathered. 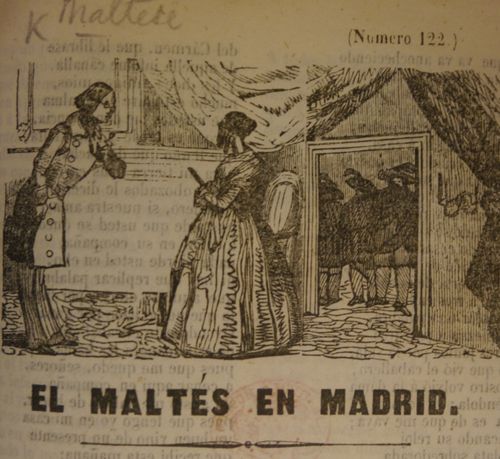 One volume of pliegos in our collection contains a number of what appear to be actual events, as they refer to specific dates and places. One ‘horroroso caso’ tells (shelfmark 11450.f.27(11)) how the shepherd Lorenzo Malmierca murdered his wife and child in a fit of seeming madness. We are told the date of Malmierca’s execution, 14 November 1842, and the name of the judge, Juan Pablo Trigueros. The account of a failed robbery at the house of the mayor of Almoster (near Reus, Tarragona) contains a similar level of specific detail: the place, the month (but not the year – in fact 1854), the names of both the mayor and the five aggressors. Two people died and three were injured. All five perpetrators were captured and sentenced to death. However, the conclusion focuses on their repentance prior to execution and consequent salvation. The text and engraving specifically recall the repentance of the Good Thief in the story of Christ’s crucifixion. 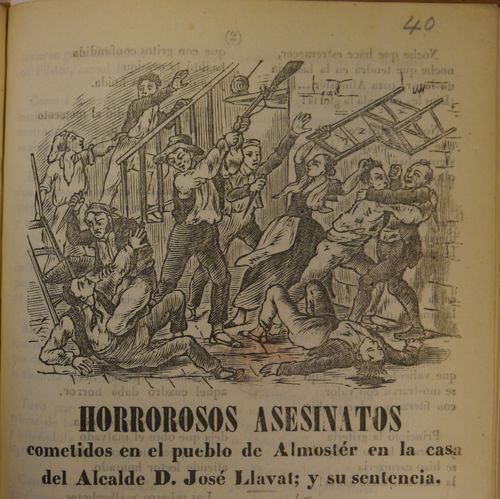 Another pliego, the work of the same printer, Ignacio Estivill, in the same year, tells how one Juan Valmajor attacked his wife and two stepdaughters with an axe. Precise details are again given: the incident took place in Figueras, at night, on 4 March 1854. Valmajor, a sawyer, had been drinking and cut down his wife and badly injured one stepdaughter, after declaring that he was sick and tired of them, ‘Me canso ya de aguantaros’. The girls are saved by the intervention of a security guard (a guarda-terra), who stabs Valmajor with a bayonet. On this occasion, the criminal has no time for repentance and the narrator can only ask the audience to pray for his soul. 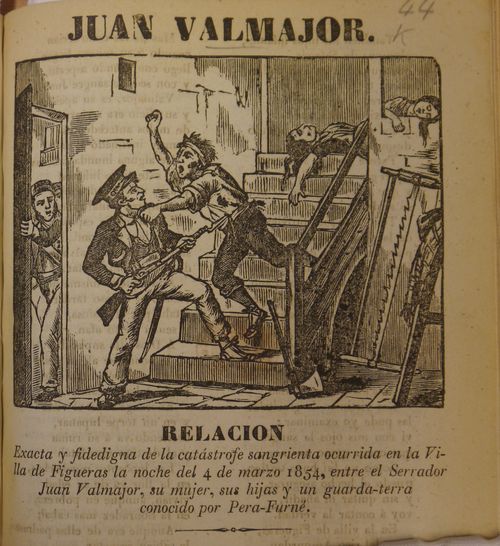 In 2013 Cambridge University Library organized an exhibition around a display of a number of the pliegos and of similar material in English.  See https://exhibitions.lib.cam.ac.uk/wrongdoing/