Parishes, Printing and Pietism – the Pietist Mission and German Publishing in London

Some Germans came to London as a workforce skilled in required, specialist trades; others came to try their luck and find work, often with hopes to make their fortune in the British capital, which bustled with life, diversity, and activity during the 17th and 18th centuries.

Germans would settle to live and put down roots in London near to where they worked and also to where their compatriots had already settled. In the east end of London in the late 17th and 18th centuries the sugar trade flourished, and many of the Germans settling there were confectionery bakers, with a skill which was in high demand. Generally, they were well-off, respectable tradesmen. Some of the parishioners at St George’s Lutheran Church were sugar factory owners, working in a trade where men earned good wages.

Such wealth and status are reflected in the parish life of St George’s. With its school attached, St George’s Church in the East End of London is a good-sized building, its interior very reminiscent of protestant churches from the same period in north-eastern Germany. The parish was funded by parishioners who would have to buy or rent their seats and pews in the church. In contrast to the customary, spartan design of Lutheran churches, the comfortable family box pews of the factory owners and well-to-do families clearly reflected their wealth.

St George’s parish archives, which are held at the London Borough of Tower Hamlets Local History Library and Archives reveal much about parish life and parishioners’ backgrounds. The archives are often a first port of call for genealogists researching German ancestry.

That places of worship could be built, parishes could be founded was only possible thanks to the Toleration Act  passed under William III in 1689.

Whilst German parish life was beginning to thrive in the east end of London, in Germany the Franckesche Stiftungen in Halle, and their missionary activity worldwide, were enjoying their heydays. August Hermann Francke founded the Franckesche Stiftungen in 1698 as a school for orphans and the poor. Rapidly the institution grew and expanded into a city within a city, with schools for all age groups, workshops where the orphans first trained as apprentices and then continued in employment, gardens, kitchens, a library, a pharmacy – and a publishing house. It was a whole independently-functioning microcosm, often referred to as ‘the New Jerusalem’. In the print shop, Francke and his pupils were able to have their Pietist, devotional literature published, which they then promoted as part of their missionary activities across the world. Perhaps the most renowned pupil of Francke who came to Britain in the 18th century was Friedrich Michael Ziegenhagen (1694-1776), court preacher to King George I. Whilst as a court preacher he was based at the Royal Chapel at St James’s, it is likely that he would occasionally have preached at St George’s too. His titles are certainly present in the St George’s collection, including the commentary on the Lord’s Prayer shown below. 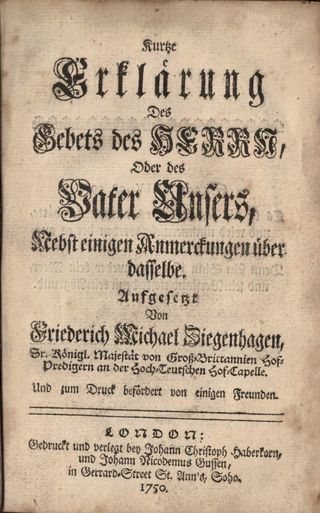 This work was printed by Johann Christoph Haberkorn and Johann Nicodemus Gussen, who ran the first German printing press in London. The printing and publishing trade was one which Germans adopted and helped to flourish in 18th-century London. Publishing religious and devotional texts provided good, solid work for the printing shops, and the publications were an important medium to promote Christian knowledge, all in the tradition of August Hermann Francke and the Stiftungen in Halle.