This year, 2014, is the bicentenary of the death of Jacques-Henri Bernardin de Saint-Pierre – he was buried in the Père Lachaise cemetery in Paris and you can visit the grave, ideally on a dry day and with stout shoes, as it’s off the footpath. He is surrounded by fellow authors. 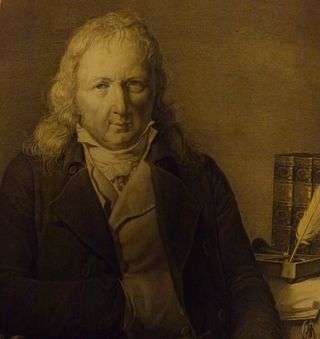 He lived a long and adventurous life – born in Le Havre in 1737 he travelled the world before settling in Paris in the early 1770s, leaving the city and his residence in the National Garden (of which he was director from 1792-93) when he married his printer’s daughter, Félicité Didot, in 1793. He was old enough to be her father and he moved to Essonne where he had a house built (now destroyed) and where his in-laws made paper for their presses. She died very young, in 1799, and Bernardin married again in 1800 to Désirée de Pelleporc – he was old enough to be her grandfather. She outlived him and eventually married Aimé-Martin, the entrepreneurial editor who managed successive publication of the complete works, including posthumous ones, that he had access to as Bernardin’s former secretary and, probably, as Désirée’s friend. But that’s another story.... (see Darrie, below)

Bernardin was not a happy person – he argued with friends and enemies alike and fought a long campaign to have protection for his (and others’) literary compositions.

His first published work, the Voyage à l’Ile de France, which appeared in Paris in 1773 (280.d.21.), gives an account of his journey to the Indian Ocean and his short stay on what is now Mauritius. He hoped to make his fortune there but left with no money, disenchanted by conditions on the island, in particular the thriving slave trade.

Living on the King’s charity (many letters giving details of this can be found in the correspondence, now being published on Electronic Enlightenment), he set to work to publish a three-volume philosophical study of nature, the Etudes de la nature in 1784 (1507/1617). Within no time pirated editions were appearing and the author asked the authorities to intervene, but to no avail. This was big business and later, during the Revolution, his printer found a way of putting a watermark in the pages, indicating the genuine article – but buyers were more conscious of cost than authenticity. People wrote to the author, criticising his scientific ideas: he thought tidal movement was caused not by gravity but by the thawing and freezing of the polar ice caps, and he thought the shape of the earth was elongated at the poles rather than flat. Wrong, as we now know, but he defended his ideas until his death. To rub salt in the wound, correspondents actually wrote to him quoting pirated editions....

In 1788 he published the work for which he is now best known, the novel Paul et Virginie, a love story set on the island paradise he had so disliked. The story first appeared in volume 4 of the third edition of the Etudes in 1788 (BL 724.b.1-4). By 1789, recognising the its value as a short novel, he was publishing it separately – but there is actually a separate edition with an earlier imprint (Lausanne, 1788) which might be an audacious pirated text or a text with a false date. The same had happened to the text called L’Arcadie – we know it actually appeared in 1788 in the same edition but an edition appears with a date of 1781, which is clearly wrong. 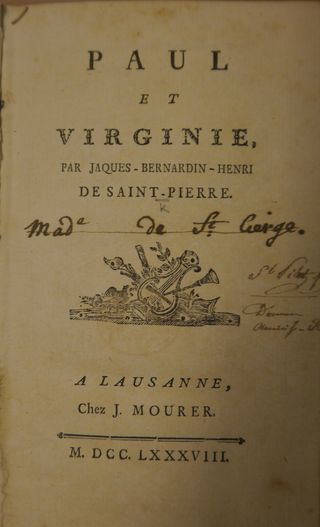 Paul et Virginie was an astounding success, possibly the most successful French novel ever published in terms of numbers of editions – it has never been out of print. Countless pirated editions appeared during the author’s lifetime but he could do nothing about it, except complain to the authorities and in his correspondence and prefaces. 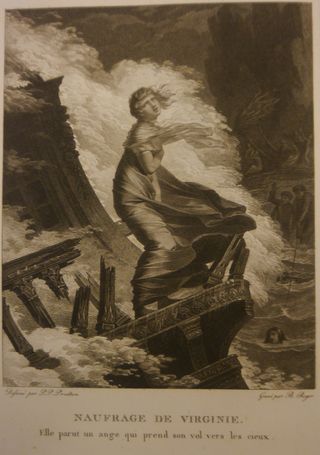 Virginie shipwrecked, from the 1806 luxury edition of Paul et Virginie

In an attempt to beat the frauds he prepared a luxury quarto edition in 1806 (BL C.156.k.7), illustrated by the top artists of the day, a text that could not easily be copied and whose success would leave a valuable inheritance for his two children (called, would you believe, Paul and Virginie) but the edition did not sell well. Time had moved on, anybody who wanted the novel already had it and the trade of luxury illustrated editions was in its infancy. Bernardin, for all his literary success, died a poor man but the novel continued to appear, often with sumptuous illustrations – for example the  beautiful Curmer edition (BL 1458.k.9.) and the elegant 1868 edition with illustrations by De la Charlerie.

The novel left its mark and many authors in the 19th century refer to it – Emma Bovary actually took it to bed with her and loved the feel of the rice paper that protected the illustrations.