Suffering from boredom? Get a raccoon – or read Hrabal!

Mystery surrounds both the beginning of Bohumil Hrabal’s life on 28 March 1914 and its end on 3 February 1997. Although he was always known by the surname Hrabal, this actually belonged to his stepfather František Hrabal, who married Marie Božena Kiliánová in February 1916, and was a friend of his putative biological father Bohumil Blecha, according to the latter’s daughter Drahomíra. The family, including Bretislav, born eight months after the wedding, moved in 1919 to Nymburk, a small town on the Labe (Elbe), where František Hrabal managed the local brewery. The atmosphere of the place is lovingly evoked in Hrabal’s novels Postřižiny (‘Cutting It Short’) and Městečko, kde se zastavil čas (‘The Little Town Where Time Stood Still’), both published in 1974 by Edice Petlice, the secret anti-Communist publishing house.  Postřižiny was filmed in 1980 by Jiří Menzel, and recaptures the period charm of the original without sentimentality. The characters are closely based on members of Hrabal’s family (his mother Maryška and the garrulous Uncle Pepin, who comes for a short visit and stays for forty years), and the eccentricities of the town’s residents are portrayed with freshness and humour. 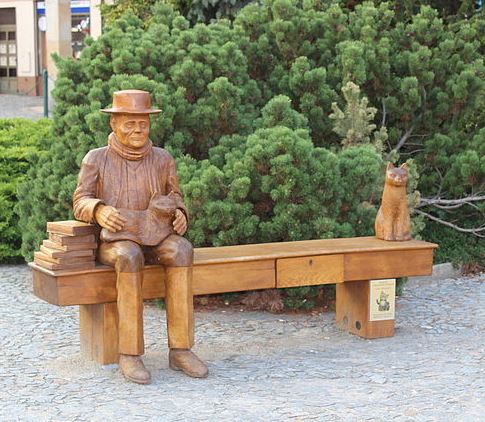 Despite an undistinguished school career, Hrabal enrolled at Charles University in Prague to read law, but as the universities closed during the Nazi occupation he did not complete his degree until 1946 after working as a railway labourer and dispatcher in Kostomlaty. He was later employed as an insurance agent, commercial traveller, steel-worker and, after a serious industrial accident, as a paper-worker and stage-hand. These experiences provided him with plentiful material for his writings; his best-known novel,  Ostře sledované vlaky (‘Closely Observed Trains’) was based on his experiences on the railways and was also filmed by Jiří Menzel, while  Příliš hlučná samota (‘Too Loud a Solitude’: [Prague], 1976; Cup.410.f.104) draws on his time in the paper-recycling mill.

Hrabal’s first efforts as a writer were poems, published in 1948 as Ztracená ulička  (‘The Lost Lane’), but the Communist coup that year  forced him underground to join a group run by the artist and critic Jiří Kolář, and his prose works of the 1950s and 1960s appeared in samizdat editions. After the Warsaw Pact invasion of Czechoslovakia in 1968, he was banned from publishing, and in 1975 an interview in which he made ‘self-critical’ remarks allowing limited publication of his writings attracted fierce criticism from dissidents who felt that he had compromised his integrity. Nor, unlike Václav Havel and other prominent authors, did he sign Charter 77.

It would be a mistake, however, to dismiss him as a hopelessly apolitical writer more skilled in creating larger-than-life characters and nostalgic pictures of Czech small-town life than in criticizing a repressive regime. The idyllic atmosphere of the little country station which forms the setting of Ostře sledované vlaky is literally exploded by an attack on a German ammunition train which costs the young narrator Miloš Hrma his life. Even the solitude of the plant where the narrator of Příliš hlučná samota  works on destroying and compressing books provides merciless comments on the danger and ultimate futility of censorship. The absurd and farcical blends with the tragic in comments on the human condition which give Hrabal’s work its universal appeal and validity.

These qualities naturally led not only to film versions but to Polish samizdat editions (Przerwy w zabudowie,  a translation of Proluky (‘Vacant Lots’/‘Gaps’; Sol.137.r) was published in 1988 by Niezależna Oficyna Wydawnicza  Warszawa), and translations into French, Hungarian, German, Ukrainian and English, despite the challenges of rendering Hrabal’s inimitable hrabalština  (Hrabalese) and Uncle Pepin’s broad Moravian dialect, cleverly conveyed by broad Scots in James Naughton’s  translation of Cutting It Short (London, 1993; H.93/2258). 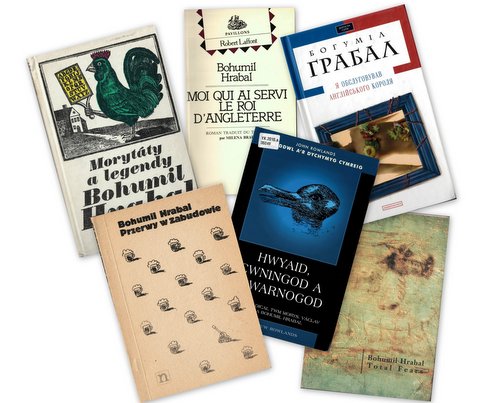 A selection of works by and about Hrabal in various languages (clockwise from top left: Czech, French, Ukrainian, English, Welsh, Polish)

The partnership with Menzel produced a final cinematic triumph, Obsluhoval jsem anglického krále  (‘I served the King of England’, 2006), based on Hrabal’s picaresque story of the same title (1973; 1993 edition YA.1994.a.14374) chronicling the adventures of an opportunistic waiter under the Nazi regime and Communism. Once again, this belies any notion that Hrabal was a mere raconteur with its penetrating juxtaposition of black humour and acid observation of the follies and compromises to which human beings are driven by totalitarianism.

In later years Hrabal was often to be seen at his favourite Prague pub, U zlatého tygra (‘The Golden Tiger’), imbibing generous quantities of beer and regaling fellow-drinkers with tales to rival Uncle Pepin’s account of childless relatives who emigrated to the USA and responded to a newspaper advertisement, ‘Suffering from boredom? Why not get yourself a raccoon?’, only to acquire a creature who wreaks havoc in their home. The circumstances of his end might have been the stuff of such a story; apparently trying to feed pigeons from a fifth-floor window in the Bulovka hospital in Prague, he toppled out and fell to his death, prompting speculation which he might well have relished.

Suffering from boredom? Get yourself a raccoon – or alternatively, read Bohumil Hrabal. At least your watch will be safe…