The British Library has over 70 books written by Filippo Tommaso Marinetti (1876-1944) as well as a number of his manuscripts and sound recordings. Several of these were included in the Library’s 2007-2008 exhibition Breaking the Rules: the Art of the European Avant-Garde, 1900-1937, of which Marinetti, the creator of Futurism and its indefatigable promoter until his death in 1944, was one of the protagonists. 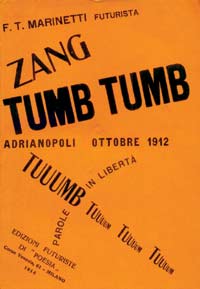 The rarest and most unusual item in the Library’s Marinetti collection was, however, acquired in 2009, the centenary year of the founding of Futurism, with generous support from The Art Fund and the Friends of the British Library. It can currently be seen in the newly-refurbished Sir John Ritblat Gallery: Treasures of the British Library as part of a display of books bought with the help of the Friends to mark their 25th anniversary. Known as ‘The Tin Book’, its proper title is Parole In Libertà Futuriste Olfattive Tattili Termiche (‘Futurist Words in Freedom - Olfactory, Tactile, Thermal’). It is the most radical example of experimentation in futurist book production, the culmination of earlier experiments in the use of metal in such publications as Depero futurista (1927) – also called the ‘bolted book’ as its pages are held together by two aluminium bolts – and the aluminium cover of the menu for the first Futurist banquet in 1931. 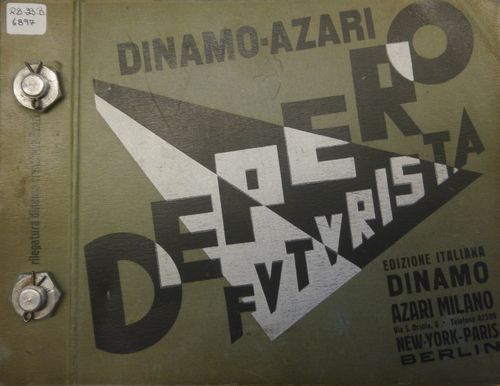 Parole In Libertà Futuriste was the first of only two Futurist ‘lithotin’ books ever produced and a prime example of a ‘book-object’. It was created in 1932 by Marinetti and Tullio D’Albisola (pseudonym of Tullio Spartaco Mazzotti, 1899-1971), a second generation futurist poet, sculptor and ceramicist. The second tin book, L’ Anguria lirica (‘The lyrical watermelon’), was published in 1934 with poems by Tullio d’Albisola, drawings by Bruno Munari and Nicolai Diulgheroff, and a preface by Marinetti. Both books were printed in Savona by Lito-Latta, a tin products factory owned by Vincenzo Nosenzo, a former sea captain and a friend and patron of the Futurists who hoped that this publishing venture would earn him extra publicity as several copies of the book were intended for distribution to the political and cultural elite (of the 101 copies printed only 50 were offered for sale). Its publication was shared by Nosenzo's firm, which was responsible for the book's production and Marinetti's Futurist publishing house ‘Poesia’ in Rome. The book is made entirely of tin with the text and colour designs lithographically reproduced on its 30 pages. It contains a selection of texts by Marinetti, written in the style of ‘words-in-freedom’, each accompanied, on the verso, by a design by Tullio d’Albisola highlighting a line or phrase from the poem. This arrangement means that simultaneous visual comparison of the text and its artistic interpretation is impossible. Some of the texts have a retrospective character, like the ‘Bombardamento di Adrianopoli’ which is a variant of the poem originally included in Zang Tumb Tumb in 1914; its illustration is likewise a variation on the cover of the earlier book. 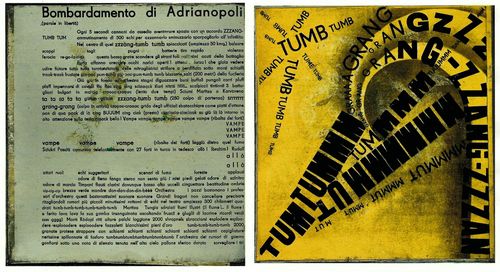 A third tin book was produced some 50 years later in conjunction with the exhibition Futurismo & Futurismi in Venice in 1986. Issued in an edition of 200 copies, Farfa: Il Miliardario della fantasia, was a homage to the Futurist spirit of innovation and experimentation, and its production involved the same techniques used in the two earlier books. It had seven previously unpublished illustrations by Bruno Munari (who had also illustrated L’Anguria lirica), was also printed in Savona (albeit by a different publisher), and had the same number of pages as Marinetti’s Tin Book. It was also a tribute to Farfa (real name Vittorio Osvaldo Tommasini), the Futurist poet, painter, ceramicist, photographer and printmaker who, irony of ironies, in 1964 was run over and killed by a car, the archetypal futurist symbol of modernity.