Among the many extraordinary Germans living in London in the Georgian period, few can have been more extraordinary than Theodora Grahn (1744-1802). Grahn, the only child of an architect, was born in Leipzig and, following her parents’ early demise, was brought up by an aunt in Berlin. She is said to have developed language skills at an early age. During the Seven Years War she started a business as an exchange broker, a rather precocious step one might think, as she was only 19 when the war ended in 1763. If not her age, then maybe her gender proved a disadvantage in this profession: it was around this time she began to dress as a man and adopted an aristocratic, masculine pseudonym, “Baron de Verdion”.

After exposure as an impostor, she moved to London around 1770, where, having demoted herself from “Baron” to “Dr. John” de Verdion, she worked as a language teacher and translator and also  dealt in antiquarian books and coins and medals. The British Library holds a trade card printed for Grahn as a language teacher and translator: “Mr. de Verdion, at Mr. Hare’s, No. 17. Greville Street, Hatton Garden, teaches German, French, and English, in the most expeditious manner, and upon the most reasonable terms. He also translates into either [sic] of these languages”. 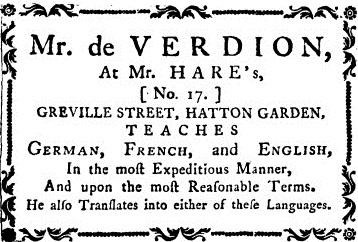 Although she is said to have had persons of quality among her pupils, her reputation was somewhat disreputable. Never leaving her house except dressed as a man, she became known for her prodigious consumption of food and drink in coffee-houses and taverns. Her true gender seems to have been known if not openly acknowledged. With her “grotesque” appearance and her famous umbrella she became a well-known London eccentric and a subject for satire. 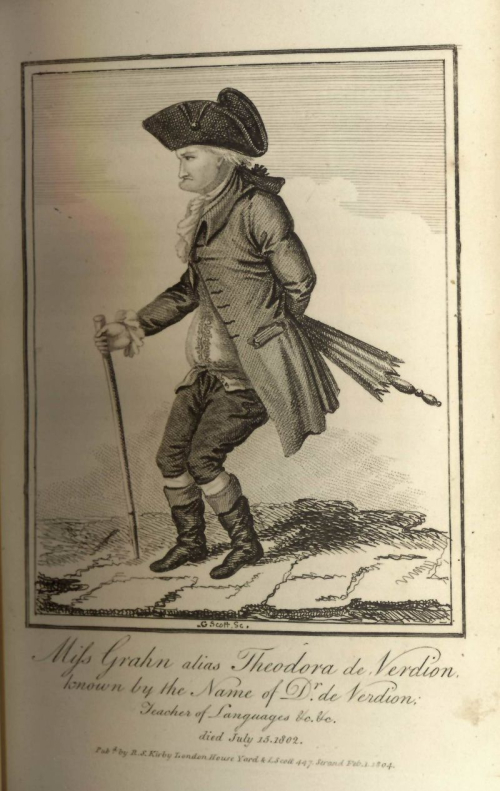 Portrait of Theodora Grahn, from the account of her life in Kirby’s wonderful and scientific museum: or, magazine of remarkable characters, vol. 2, London 1804 (pp. 47-53). G.13550

Grahn died of cancer in 1802, having made a will as “John de Verdion otherwise Theodoria [sic] de Verdion, Master of Languages of Upper Charles Street Hatton Garden” and was buried in the cemetery of St Andrew’s, Holborn, under her assumed masculine identity. After her death, a number of accounts of her life appeared in books featuring bizarre individuals and occurrences.

More recently, Grahn has come to the attention of those working in the field of gender studies, who have sometimes assumed she was a transsexual as well as a transvestite. I’m not so sure, however, that we can draw firm conclusions about her gender identity or sexual orientation from the information we have. Her assumption of a masculine identity and dress could simply be seen as an effective strategy for a determined young woman in a world that provided so few opportunities for talented and independent women. We shall never know what she really was behind the masculine mask.