The British are not, it must be said, especially inventive when it comes to Easter egg traditions. Possibly the most ancient of these is the Lancashire custom of ‘pace-egging’ (‘pace’  deriving from the Latin Pascha, not an allusion to the speed with which the decorated eggs roll down the hill in Avenham Park, Preston, where crowds still gather on Easter Sunday to watch the ritual). The Wordsworth Museum in Grasmere houses a collection of elaborately decorated eggs which the poet (or more probably Mary and Dorothy Wordsworth and Sara Hutchinson) prepared for young John, Dora and William junior.  Originally these eggs were wrapped in onion-skins and boiled to give the shell a rich golden marbled colour which, sadly, would have been ruined when they were rolled to see whose would go furthest without cracking. Now, unfortunately, this tradition, like that of the ‘pace-eggers’ with their disguises and blackened faces, performing a mumming play in return for eggs or funds to purchase them, has largely died out, though those eager to hear the original ‘pace-egg’ song can do so through various versions in the British Library’s sound archives.

Elsewhere in Europe, though, things are very different. The sumptuous creations of Carl Fabergé for the Russian Imperial court are famous, but in confecting these masterpieces in jewels, pearls and fine enamelling he was continuing a much older tradition found not only in Russia but in Ukraine and throughout Central Europe. Nor were eggs the only items decorated at Easter; in Northern Europe, as in Bohemia, birch or pussy-willow boughs were gathered and festooned with ribbons and feathers for use in playful switching rituals which originated in much older fertility rites and Christian penitential practices, a tradition still observed on ‘Whipping Monday’ in the Czech Republic, where the boys who run from house to house with their pomlázky  are rewarded with Easter eggs from the girls (who take revenge by dousing them with water the following day).

Over the years the methods used to decorate these eggs have become increasingly complex and  sophisticated. Those wishing to experiment for themselves can consult Marie Brahová’s České kraslice  (‘Czech Easter eggs’; Prague, 1993: BL shelfmark YA.2002.a.1656), which gives illustrated instructions on how to achieve striking effects with batik, beads and relief as well as the more familiar techniques of painting, etching patterns with a nail on a fine coat of wax or paint, or even the use of humble mud or clay, readily available in even the poorest village. As well as flowers and abstract patterns, favourite motifs included pictures of Christ and the saints, or views of local scenes, as in the splendid collection of the Moravské museum in Brno, described in Eva Večerková’s Kraslice (Brno, 1989; X.0410.137).

In Ukraine the decorated eggs, painted with equally intricate designs, are carried in baskets to church to be blessed by the priest, together with the traditional kulich, a rich fruited bread which, like the eggs, represents the return to feasting after the strictures of the Lenten fast,

when Orthodox believers abstain not only from meat and sweet things but from dairy produce of any kind. Here the eggs are covered with detailed geometrical motifs echoing those of the red and black cross-stitched embroideries on the cloths with which the baskets are draped, as well as with stylized images of birds, fish and animals (right) reflecting the pre-Christian animistic beliefs of the ancient Slavonic peoples as well as the rural way of life. Colourful photographs of these may be seen in O. H. Solomchenko’s Pysanky Ukraïns’kyckh Karpat  (‘Pisankas of the Ukrainian Carpathians’, Uzhgorod, 2002; YA.2003.b.1092).

Easter, a season of rejoicing and reconciliation, is also a time to remember the traditions which unite the peoples of East and West, however we may celebrate, and to admire the wealth of invention which brings such beauty within the reach of the poorest peasant. Like Hans Christian Andersen’s Emperor of China with his artificial nightingale, the Tsars with their elaborate Fabergé eggs were no richer than the humblest of their subjects who were proud to possess examples of such fine workmanship created with the resources of Nature itself. 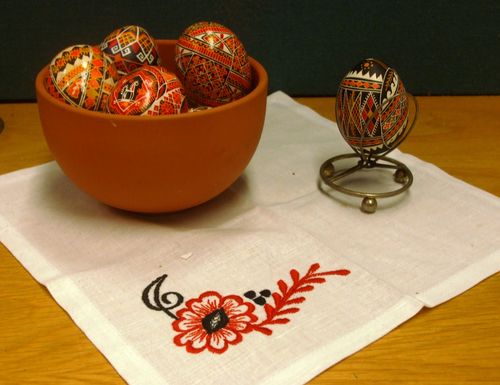