ELN and the red shoes

In a guest post for European Literature Night 2014, ELN’S presenter and chair of the judges, the journalist Rosie Goldsmith, recalls its birth 6 years ago.

It’s not that I’m possessive or anything but I do feel a sense of ownership – and motherly pride! - as far as European Literature Night  is concerned. I was there at its birth, witnessed its first faltering baby steps and am now watching it walk tall.  From the day it was born, in May 2009 in the Conference Centre of the British Library, ELN has been an unmissable annual event and has nurtured a community of people who love good European literature in English. ELN is today a focal point for writers, translators, readers, publishers, agents, booksellers and cultural organizations who know that without ELN we would be missing out on some of the best writing from our European continent. (Yes, the UK is part of Europe!)

Dear ELN, you know how parents often embarrass their children by saying, ‘I remember when you were born…’? Well, here goes:

‘Dear ELN, you’ve had a big devoted family with you from the day you were born. There’s your godfather Jeremy O’Sullivan, Cultural Attaché European Commission Representation in the UK; godmother Janet Zmroczek, Head of European Studies at the British Library, and Jon Fawcett, BL’s Senior Events Officer (the world’s best ever time-keeper); ELN London’s founding father, the Director of the Czech Centre Ladislav Pflimpfl (winner of the best un-prononceable ELN name), and from the start, always there to hold your hand, Renata Clark of the Czech Centre and all your very generous uncles and aunts from the British Council and Arts Council England. Without them you wouldn’t be who you are today.

‘Dear ELN, I can’t quite remember how I got involved – something to do with the BBC and red shoes? - but I was thrust out on stage every year to interview all your famous friends. Then, as news of your good behaviour spread, we enlisted the expertise of Daniel Hahn from the British Centre for Literary Translation and Rachel Cooke of The Observer newspaper (to assist with your development) and Sarah Sanders and Sharmilla Beezmohun of Speaking Volumes Live Literature Productions to – how shall I put it? – knock you into shape. Your family has grown.  Your admirers have grown. You are a 6 year old prodigy. Today everybody wants to know you, to be in your gang.’

Ok, the red shoes; the BBC: an explanation. I’d been a presenter and producer on BBC Radio 4 for 20 years. I love the BBC, I really do (travelled the world; presented flagship programmes like Front Row, Open Book, Crossing Continents and A World In Your Ear), but I wanted more. Maybe it was greed? Global domination? I was angry. Angry about the neglect of foreign fiction in the UK. I’d already reported on revolutions across Germany and Eastern Europe. It was clear to me that we needed another revolution, to improve the standing of quality international fiction in the UK. Also, at the BBC, I had a serious problem: I love red shoes and red lipstick and they just didn’t work on radio (I tried). So, ELN and the British Library gave me a home. 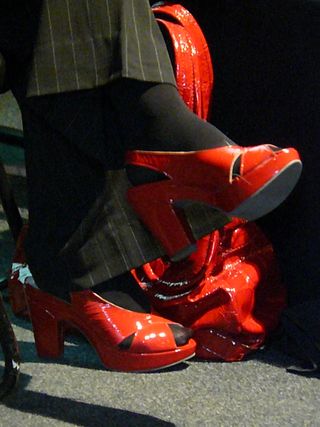 2009, Year One, was a blur. Did I interview ten authors without a break? Was it eight? Was that possible? Were there ten readings? I recall that the French spoke in French (in spite of strict instructions) and the Romanians read out a whole 25-minute short story (although, read by the brilliant Romanian actress Anamaria Marinca and written by Nobel Prize-touted Mircea Cărtărescu, we forgave them). ‘Marathon’ was the word. Poor Jon Fawcett was having kittens.

But call me ‘bohemian’ (please do!), I still love the literary-salon-like marathon-madness of European Literature Night. And for this our 6th year, if I say so myself, we happy band of judges have chosen six truly major league literary players from across the continent. To be on stage interviewing stars like Julia Franck (Germany), Antoine Laurain (France), Diego Marani (Italy), Witold Szablowski (Poland), Jonas T. Bengtsson (Denmark) and Dimitri Verhulst (Belgium) is my idea of literary heaven.

As chair of the ELN judges, event presenter and curator (until Sarah and Sharmilla came along and rescued me), I’m extremely aware of how important ELN is, but also how we need to continue to support our precious prodigy. Sadly, there’s still huge ignorance and hostility towards international arts and literature in the playground of our national life.

2014 will be an ELN-year-to-remember. Each of our fabulous authors is famous ‘back home’ and I vow will wow Britain too - or I’ll eat my red shoes!

You can find more blog posts by Rosie Goldsmith about European literature at http://www.literaturhauseuropa.eu/?author=4 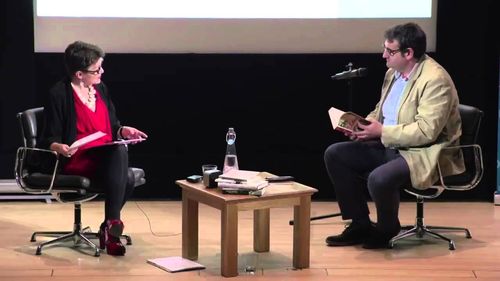