On 14 May 2014 the British Library will host European Literature Night for the 6th consecutive year with an exciting new extended programme of events – the well-established evening Writers event in the Conference Centre Auditorium which brings together six diverse and compelling European writers in conversation with acclaimed journalist and passionate advocate of European literature, Rosie Goldsmith; a parallel Graphic Novelists event  in the Terrace Restaurant with four high-profile writers chaired by Paul Gravett, Co-Director of the Comica Festival and curator of the British Library Comics Unmasked exhibition, and an afternoon  panel discussion Stories in Translation: Translating the Untranslatable run by the Open University and chaired by Dr Fiona Doloughan, which will bring together two exciting writers who will later feature in the Auditorium event, a translator and a publisher. 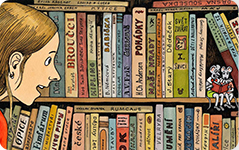 Illustration by Lucie Lomova, one of the artists featured in ‘European Literature Night: The Graphic Novelists’

In the run-up to European Literature Night you will find a selection of exclusive posts from and about the writers and their work here on the BL European Studies blog beginning with a post very soon about Antoine Laurain’s The President’s Hat. You can also find more information about the writers, some special video interviews and extracts from their books on the website of the Writers' Centre Norwich.

The British Library feels like a natural home for European Literature Night. In the field of literature, our collections range from literary archives to sound recordings, translators’ papers, electronic archives and a vast array of print publications from fiction, poetry and drama in most written languages of the world and in translation, to critical texts about them. We aim to inspire the widest public with a lively programme of events, exhibitions, seminars and online offerings which capitalise on the expertise of our curators to bring to life our extensive collections from continental Europe alongside our incomparable English-language and other international collections. Along with colleagues in English & Drama, European Studies curators engage in a range of collaborative projects which explore literature in translation from many perspectives.

European Literature Night is presented in partnership with EUNIC (European Union National Institutes for Culture) London which brings together 28 European Cultural Institutes and Embassies, the European Commission Representation in the UK, Czech Centre London and Speaking Volumes Live Literature Productions, along with a host of other supporters including publishers, translators and arts organisations. It gives us all the opportunity to work together towards a common goal of promoting to UK audiences the best of European culture in all its diversity. 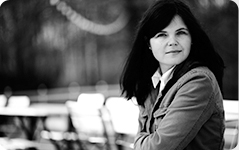 Julia Franck, one of the novelists featured in this year’s European Literature Night

Having participated in the selection panel for the European Literature Night Writers event I am really excited about the stellar line-up:  Jonas T. Bengtsson (Denmark), Julia Franck (Germany), Antoine Laurain (France), Diego Marani (Italy), Witold Szabłowski (Poland) and Dimitri Verhulst (Belgium). Don’t miss these great writers in conversation with Rosie Goldsmith, followed by short readings from their work. If you’d like to hear Diego Marani and Witold Szabłowski speak in a little more detail, along with award-winning translator Antonia Lloyd-Jones and publisher Eric Lane (Dedalus), consider joining the afternoon seminar in the Brontë Room in the BL Conference Centre. Tickets are free but seating is limited, so it is essential to book.

A whole new dimension is being brought to European Literature Night with the addition for the first time of a celebration of  the burgeoning graphic novels scene with Line Hoven (Germany), Lucie Lomová (Czech Republic), Max (Spain) and Judith Vanistendael (Belgium) who will read, discuss and live-illustrate their work. The events will run in parallel, but we can expect a real buzz when all the writers and both audiences come together for a joint reception and complimentary viewing of the exhibition Comics Unmasked: Art and Anarchy in the UK.

Tickets are currently available for all the events. And don’t forget to check back here to the British Library European Studies blog for discussion about European Literature Night and exclusive posts from the writers.