From Vietnam to Vichy and beyond: Marguerite Duras

An artist who was constantly preoccupied with the theme of memory, true or false, Marguerite Duras had no shortage of such material to draw upon. Born on 4 April 1914 in Gia-Dinh (now Saigon) to parents attracted by government incentives to settle in French Indochina, the exotic nature of young Marguerite Donnadieu’s life bore striking resemblances to that of Madame de Maintenon; the colonial adventure turned out badly, her father died leaving her mother to raise her four-year-old daughter and two other children in relative poverty following a calamitous business investment, and at seventeen  Marguerite returned to France to study at the Sorbonne, but not before embarking on a colourful affair with a wealthy Sa Dec merchant, Huynh Thuy Le. Although she returned to this period of her life in various memoirs and works of fiction, her most famous treatment is in her novel L’Amant (The Lover: BL shelfmark YA.1986.a.10677), with which she won the Prix Goncourt, France’s most prestigious literary award, in 1984.

After studying mathematics, political sciences and law, Duras joined the French Communist Party and subsequently worked for the French government office representing Indochina. From 1942 to 1944, she worked for the Vichy government in an office that allocated paper to publishers (virtually acting as a book censorship system), but was also, together with her first husband Robert Antelme, a member of the French Resistance. He was deported to Buchenwald, and although he survived, the marriage did not. In 1943 she published her first novel, Les Impudents under the surname Duras, the village in the Lot-et-Garonne département which had been her father's home. 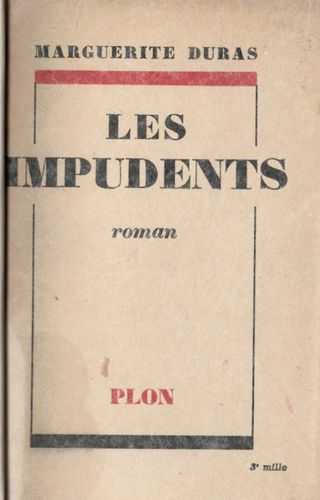 Although her early works were reasonably traditional in form, in her later novels she achieved an increasingly streamlined style of prose in which even the characters are stripped to essential qualities, sacrificing even the need for names and appearing simply as ‘Elle’ and ‘Lui’. The immediacy of her dialogue lent itself particularly well to cinematic adaptations, and she was also a gifted scriptwriter. Perhaps her best-known work in this capacity is the screenplay for Hiroshima mon amour (Paris, 1960; 11455.a.16), directed by Alain Resnais  in 1959, a dialogue between a Japanese architect and French actress who, analysing the breakdown of their relationship, explore the truth and fallacy of memories and the analogy with the Japanese catastrophe of the Second World War.

Her explicit treatment of sexual relationships, her idiosyncratic use of dialogue and her distinctive prose style inevitably made Duras’s work the object of parody and pastiche, notably at the hands of Patrick Rambaud in Virginie Q. (Paris, 1988; YA.1989.a.8242) a skilful and witty treatment which is based on a sound knowledge of her writings. Yet she also inspired more serious works in other media; a recent exhibition at the Maureen Paley Gallery in London featured paintings and drawings by Kaye Donachie based on Duras’s novella La Maladie de la mort (Paris: Editions de minuit, 1983;  X.958/26494).

These are only a limited selection of the works held by the British Library from the many which Duras produced during an outstanding creative life which drew to a close after a struggle with alcoholism and cancer of the throat on 3 March 1996. We hope that readers will be encouraged to embark on their own voyage through her strangely compelling world and, in doing so, to gather memories of their own.