Hats off to Laurain! A tale of three translators

In the first of our guest posts for European Literature Night 2014 Emily Boyce, in-house translator for Gallic Books, discusses how she and two others worked on the translation of this year’s featured French book. 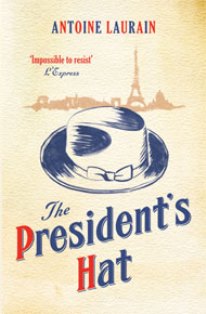 It might surprise readers to learn that the English version of Antoine Laurain’s 208-page novel The President’s Hat, a light-hearted and uplifting meditation on the nature of power and self-confidence in Mitterrand’s France, was worked on by three translators; myself and Jane Aitken from Gallic Books and freelance literary translator Louise Rogers Lalaurie are unmasked at the end of the text rather than on the title page as is customary. Perhaps a collaborative effort might be expected of a weighty tome which would take an age for one person to tackle (Penguin’s recent multi-handed re-translation of Proust,  for example), but a whimsical tale of a mislaid hat?

In our case, although timing was an issue and the text was certainly not without its challenges and complexities (how to deal with all those 1980s cultural and political references, for one thing), the main reason for splitting the translation was in order to capture the distinct voice of each character. The book is almost a succession of short stories as the hat passes from one head to another changing the lives of those who wear it, from the accountant who finds himself dining next to the presidential party in a Paris brasserie, to the aspiring writer struggling to free herself from a dead-end affair with a married man, to the perfume maker who’s lost his inspiration, to the staunch conservative set to surprise his fellow dinner party guests...

Voice is often the hardest thing to get right in a translation. The author will have carried each character around in his or her head for months if not years, perhaps building up a whole picture of that character’s life and personality, only a fraction of which might have made it into the finished book. The translator can usually only go on what’s on the page. In this respect, it occurred to Gallic MD Jane that the act of translation was rather like interpreting a play script, and it made sense to ‘cast’ translators to play each part.

Translators are undoubtedly versatile actors, but putting on a convincing portrayal of such a range of characters of different sex, age and background presents a real challenge. No matter how skilled a writer the translator is, he or she will have registers they feel more or less comfortable in, and their choice of words will always be influenced by their own experience. A translator of Proustian prose may struggle to render the kind of urban slang the award-winning translator Sarah Ardizzone   specialises in; Sarah spent time living in Marseille specifically to pick up  ‘Beur’ Verlan.

I translated twenty-something Fanny in The President’s Hat, being of a similar age myself, but I was also the voice of Bernard, the middle-aged man whose transformation from stiff bourgeois to art-loving liberal is signalled when instead of his usual copy of Le Figaro, he picks up leftie Libération. The casting of translator to role was partly practical – Louise had already translated the beginning of the story featuring accountant Daniel as an extract for Fiction France,  so it made sense for her to continue with him – and partly a matter of personal preference; Jane may have been closest in age to perfumier Pierre, but she was also drawn to his story.

Jane and I are set to stage another co-translation with Antoine Laurain’s next book, The Red Notebook, which is coming out in spring 2015. This time the main characters are Laure (played by me), an expert gilder who has her handbag stolen, and Laurent (played by Jane), a bookseller who finds the bag and sets out to return it to its rightful owner. Perhaps Jane can draw upon her experience of running Belgravia Books  in interpreting the part of Laurent. As for my method acting, I’d better start surrounding myself with gold! 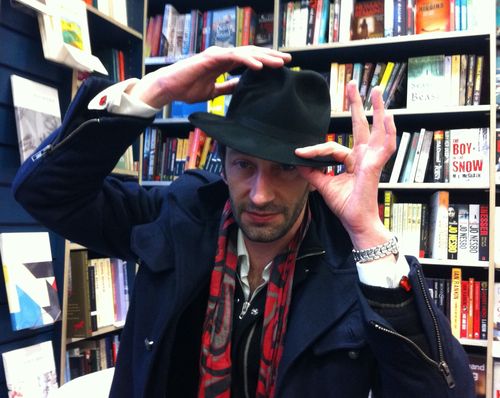