On tour with a translation

In an earlier guest post for European Literature Night, we heard from one of the translators of Antoine Laurain’s  The President’s Hat. This was Laurain’s  first novel to be published in English and was among the first batch of Gallic Books titles sold in the United States by Consortium. It was one of twelve titles chosen by a panel of independent booksellers for the ABA Indies Introduce Debut Authors promotion in Fall 2013 and Antoine was invited to appear at bookstores across the country. Here he  describes his experience of that tour.

When I wrote Le Chapeau de Mitterrand I thought perhaps it might find a readership in France, and indeed this proved to be the case. A year later, another story began...

A few weeks after Gallic Books released The President’s Hat in the UK in March 2013, the fantastic feedback from British readers gave reason to believe that my very French story – which takes place in 1980s Paris in the days of François Mitterrand’s presidency – might appeal to a whole new audience. It seemed the ‘fairytale’ dimension, humour and optimism of the story could also work in another language. And not just any language, but the most widely spoken language in the world.

It was around this time that Jane Aitken and her team began to discuss the possibility of taking The President’s Hat on a tour of the USA. As American independent booksellers got behind the book, the three cities on the itinerary quickly grew to ten! From San Francisco to Boston by way of LA, Salt Lake City, Milwaukee, Chicago, New York... Like a presidential candidate on the campaign trail, I set off to meet my novel in bookstores across the country for much of September 2013. I gave talks (in English, if you please, and without forgetting to throw in the customary joke), answered questions and signed many, many books. I think the last Frenchman to embark on a tour of this scale must have been Maurice Chevalier! Indeed my French publisher, Flammarion, said as much just last week: ‘I’ve never known any of our authors to do a US book tour ... apart from Michel Houellebecq, of course.’ 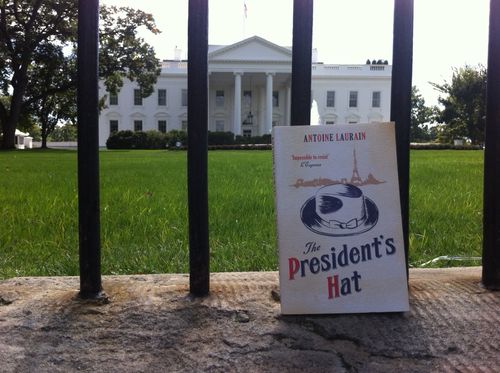 One of the most memorable and surprisingly moving aspects of the trip was hearing my American readers pronounce the names of my characters : ‘When Daniel Mercier takes the hat ... talking about Fanny Marquant ... My favourite character is the nose, Pierre Aslan ... Do men like Bernard Lavallière still exist in France?’ There was something amazing about hearing the names I had come up with at my desk in Paris two years earlier pronounced in an American accent! I kept telling myself I was going to wake up one morning and find myself back home with the novel still unfinished and the idea of promoting it in the USA nothing but a dream. But it really was happening. This fairytale for grown-ups had worked its magic once again.

I sometimes have a look online and am thrilled to find that new reviews are still appearing regularly from both sides of the Atlantic. I’m delighted to have been able to bring a little happiness to readers I never imagined I could reach. I’m grateful to the team at Gallic Books and to my British and American readers for making all of this possible.

You can see Antoine’s photo diary of his tour here. Antoine Laurain with a map of the USA