Vuk Stefanović Karadžić (1787-1864), was a Serbian philologist and a reformer of the Serbian literary language. 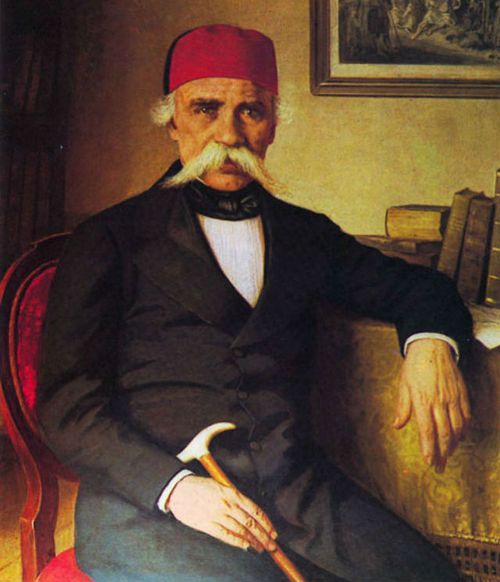 This year marks the bicentenary of the publication of Karadžić’s Мала простонароднЬа славено-сербска пєснарица (‘Simple little Serbian-Slavonic song book’, Vienna, 1814;  1461.e.17.) and of a Писменица сербскога іезика (‘Serbian grammar book’) . 2014 is also marks the 150th anniversary of his death in Vienna in 1864. The forthcoming Balkan Day seminar at the British Library on 13 June 2014 will highlight the cultural achievements and the legacy of this great reformer.

Two hundred years ago Karadžić began a revolutionary reform which gave the Serbian nation a standardised literary language, a complete 30-character Serbian Cyrillic alphabet and revised orthography which included the six new characters of the Serbian alphabet (Ђ, Ј, Љ, Њ, Ћ and Џ). Another of Karadžić’s lasting achievements was his life-long collection and publication of traditional Serbian national literature, especially Serbian national poetry. Over the course of 50 years Karadžić published several editions of selected Serbian national poetry, the first three volumes in Leipzig in 1823-24 (of which the library has volumes one and two; 1064.h.26-27.), and a definitive five-volume edition published in Vienna in 1841-65 (11585.f.11.; volume five was published posthumously by Karadžić’s widow).  The Serbian state acquired Karadžić’s large archive, and has continued to publish his papers to the present day.

Before Karadžić’s reforms, Serbian literature was written in Church Slavonic from the Middle Ages, then in the mid-18th century in Russo-Slavonic, and later in Slavonic-Serbian (slavenoserpski, a mix of the national spoken language and Russo-Slavonic). Although supported by the Church and the State, these languages were not easily understandable by the ordinary Serbian people who communicated in their own national language. It was this everyday spoken language that produced the traditional national literature that formed the basis for Karadžić’s reforms. Karadžić thus created a new literature and a new literary language breaking all ties with the establishment which remained furious and hostile in Karadžić’s lifetime to the new alphabet, orthography and language. The last remaining restrictions on Karadžić’s alphabet and orthography were lifted only after his death.

Karadžić was not only an ideologist and supporter of the language reform but an active contributor to the creation of the new literary language. In 1818 Karadžić produced a Serbian dictionary, a central text of the contemporary Serbian language. 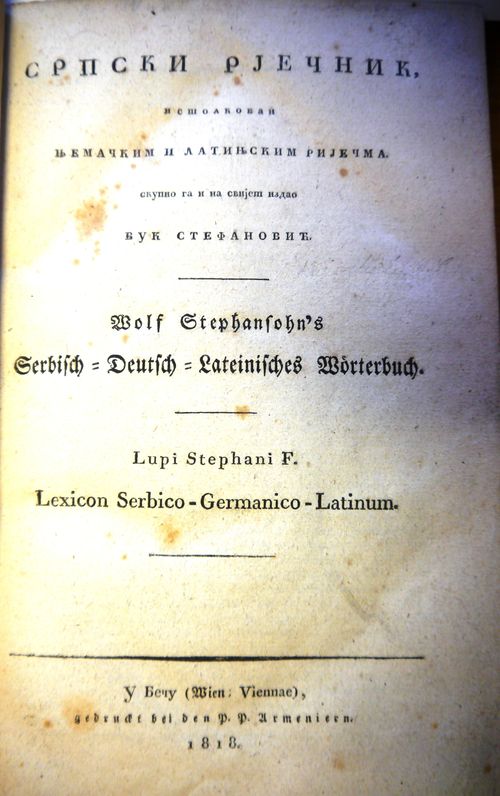 This Serbian dictionary was the first book printed in the new alphabet according to the new orthography. Here Karadžić executed to perfection the main principle of a phonetic orthography, Adelung’s dictum ‘write as you speak’: Karadžić introduced 30 letters representing 30 sounds in the Serbian literary language, and in the dictionary he published over 26,000 words as he remembered them. This was a trilingual Serbian-German-Latin dictionary produced in collaboration with Bartholomäus (Jernej in Slovene) Kopitar who was Karadžić’s teacher and the mind behind his literary and linguistic reforms, and it was Kopitar who encouraged Karadžić to collect and preserve Serbian traditional national poetry, tales and proverbs. Kopitar, who was an assistant keeper in the Imperial Library in Vienna, introduced Karadžić’s work to Jacob Grimm  and Johann Wolfgang von Goethe, who introduced and promoted Serbian national poetry in Europe.

The entries in the Serbian dictionary represented all the genres of the national oral tradition, and some entries had an encyclopaedic, ethnographic or historiographical format and character. 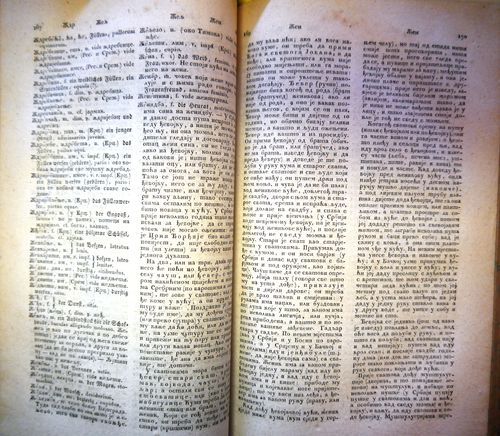 The opening above shows the entry for marriage (женидба in Serbian) and describes in great detail the marriage ceremony and customs in Serbia. 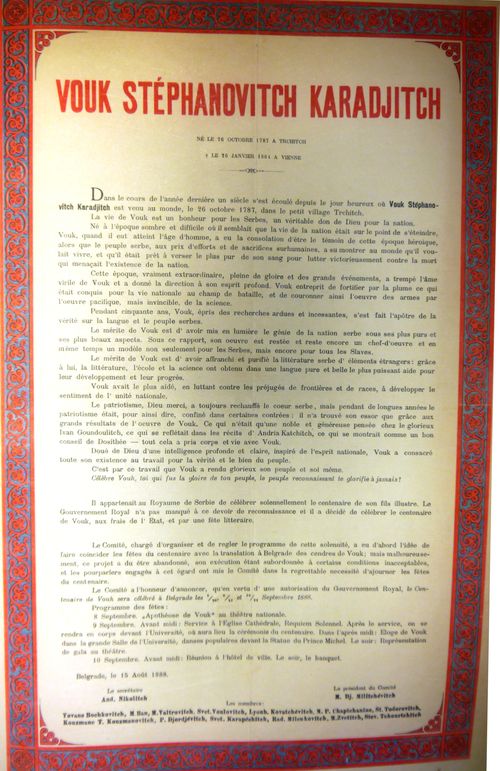 This centenary placard printed in French and Serbian on the occasion of Karadžić’s jubilee, celebrations in Belgrade in 1888, was presented to the British Museum Library on 13 October 1888. The British Library holds a significant collection of over 250 titles by Karadžić from 1814 to 1864 in the first and subsequent editions, in the original and in translation, and in reprints and facsimile editions. The collection has been developed over the period of 173 years from the first acquisition (the Serbian dictionary in 1841) to Serbian fairy tales, acquired in 2013. There are also  works about Karadžić in all major languages, together with books in Serbian and other South Slavonic languages. The library is acquiring the  full set of Karadžić’s collected works in 32 volumes (Belgrade, 1965- , X.0989/612; four volumes are still to be published), which includes a bibliography by Karadžić scholar Golub Dobrašinović. Karadžić’s 1867 book Живот и обичаји народа српскога (‘Life and customs of the Serbian people’) is freely available in digital format  from the British Library (the printed copy is at shelfmark 010127.c.28.).

To mark the bicentenary of the birth of Karadžić, the British Library held an exhibition Vuk Stefanović Karadžić 1787-1864, from 26 June to 27 September 1987.

Songs of the Serbian people. From the collections of Vuk Karadžić. Translated and edited by Milne Holton and Vasa D. Mihailovich. (Pittsburgh, Pa., 1997) YK.1999.a.1659.