In the film Star Trek VI, a Klingon ambassador claims that Shakespeare can only be appreciated ‘in the original Klingon’. This is a clever reference to the way in which many countries have adopted Shakespeare’s works as their own but, since the imaginary Klingons have the kind of militaristic society and guttural language often associated with Germany in Anglo-American popular culture, I suspect that the scriptwriters had Germany particularly in mind, for few nations have claimed ownership of Shakespeare as enthusiastically as the Germans. Since the  late 18th century German writers have shown an admiration sometimes bordering on idolatry for Shakespeare’s work, and it is often claimed that his plays are more frequently performed in Germany than Britain (although this statistic no doubt owes something to Germany’s larger number of flourishing provincial theatres).

What one critic described as ‘Shakespearomania’  really took off in the 1770s when the young writers of the ‘Sturm und Drang’ embraced Shakespeare’s ‘naturalness’ and freedom from strict Aristotelian unities as a contrast to the French classical drama then upheld as an ideal. These angry young men may have taken their understanding of Shakespearean freedom to extremes, but the interest in his work which they aroused was influential and survived after they had burned themselves out or settled into less wild literary pursuits.

The torch was taken up by the Romantics. Like the ‘Stürmer und Dränger’, they admired the truth to nature they found in Shakespeare, but they also began to engage more seriously and critically with his works and to try and improve on the available translations. It was a group of writers associated with German Romanticism – August Wilhelm Schlegel, Ludwig and Dorothea Tieck and Wolf Heinrich von Baudissin – who created what became the classic German translation of Shakespeare.

Ludwig Tieck represents the two main strands of 19th-century German Shakespeare reception: a creative, emotional response and an academic interest. As a writer he admired and was influenced by Shakespeare’s work, and his involvement in the translation was driven by the desire for a high-quality German version of the plays for reading and performance. But he also took a scholarly approach, researching Shakespeare’s world and the theatre of his age, and travelling to England in 1817 to pursue his studies. The visit included meetings with Samuel Taylor Coleridge, himself a significant mediator of German literature in England, and the two men later corresponded. 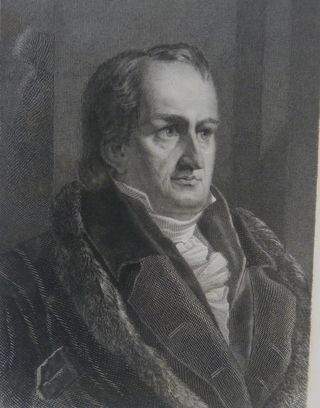 The British Museum Library bought a number of books from the sale of Tieck’s library in 1849, among them an edition of Shakespeare’s works with Tieck’s handwritten annotations. Most of these were made not in the plays themselves but in the preliminary volumes which contain studies of Shakespeare and the Elizabethan stage; this is Tieck the critical scholar at work rather than Tieck the romantic author reading for aesthetic pleasure. His copious comments are difficult to read, but he often appears to take issue with the critical opinions expressed and sometimes simply expresses his disapproval with an exclamation mark or a comment like ‘Unsinn!’ (‘nonsense!’). 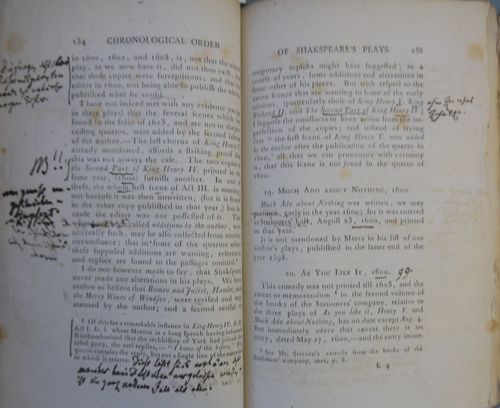 Manuscript notes by Tieck in vol. 2 of The Plays of William Shakspeare. With the corrections and illustrations of various commentators. (Basel, 1799-1802) C.134.dd.1.

As the 19th century continued, Shakespeare flourished in Germany, both in performance and as a subject of academic study, and came to be regarded as Germany’s ‘third classic poet’ alongside Goethe and Schiller. In 1903 the German critic Theodor Eichhoff entitled his study of the Bard Unser Shakespeare (‘Our Shakespeare’), and just over a decade later, with Germans encouraged to boycott foreign culture after the outbreak of the First World War, the playwright Gerhart Hauptmann claimed an exception for Shakespeare, declaring that ‘[Shakespeare’s] soul has become one with ours … Germany is the land where he truly lives’. Unsurprisingly this drew furious responses from Britain.

But this is to start moving beyond the period of our survey of Anglo-German relations, and besides, the use of literature for national propaganda in time of war is not the best way to consider the significance of Shakespeare in the wider world. After all, the British should be proud rather than defensive when their national poet transcends national boundaries so triumphantly that even a race of fictional aliens wants to claim him! And if we want a happier image of the ‘German Shakespeare’, how about Tieck enthusiastically engaging with the plays and their criticism, and discussing them with Coleridge? If we want to ask ‘Whose Shakespeare?’  there are many possible answers from all over the world, and ‘Tieck’s Shakespeare’ is among the most positive of them.

Geoffrey West, ‘Buying at Auction: Building the British Museum Library’s Collections in the Second Half of the Nineteenth Century’, in Giles Mandelbrote and Barry Taylor (ed.) Libraries within the Library: the Origins of the British Library’s Printed Collections (London, 2009), pp. 341-352. YC.2010.a.1356 [For information on books from Tieck’s library now in the BL]

Edwin H. Zeydel, Ludwig Tieck and England: a Study in Literary Relations of Germany and England During the Early Nineteenth Century (Princeton, 1931) 10709.ee.23

Hi there,
you may be interested to know that I have published an article on the reception of Shakespeare under the Nazis - it relates to some of the points you have mentioned.