Alexander and the Elephant

A body of legendary material grew up around the historical figure of Alexander the Great and his teacher Aristotle. The Old Spanish Libro de los buenos proverbios (a 13th-century translation from the Arabic Kitab abad al-falasifa) includes this scientific anecdote:

Oyo de su maestro Aristotiles que de la tristicia  se desfaze el coraçon e que lo faze muy chico.  Pues quisolo provar e mando tomar un animalia el que es mas cerca de la natura del omne.  E mandolo prender e prisol muchos dias e mandol meter en un logar muy apartado (147.5)
[Alexander heard from his master Aristotle that sadness destroys the heart and shrinks it.  So he wanted to prove this and took an animal which is closest to the nature of man.  And he ordered it to be taken and he kept it for many days and ordered it to be put in a remote place]

After a time he had it cut open, and its heart had indeed shrunk.

What was this ‘animal which is closest to the nature of man’? The story is not picked up in Cary’s classic study.  The most obvious candidate is an ape.  But …

When Alfonso X of Castile and Leon around 1270 ordered this snippet to be incorporated into his General estoria (Universal History), his editorial team turned to a favourite text of theirs, the Natural History of Pliny the Elder:

And Pliny does indeed give the elephant very good press:

Let us now pass on to the other animals, and first of all to the land animals. The elephant is the largest of them all, and in intelligence approaches the nearest to man. It understands the language of its country, it obeys commands, and it remembers all the duties which it has been taught. It is sensible alike of the pleasures of love and glory, and, to a degree that is rare among men even, possesses notions of honesty, prudence, and equity; it has a religious respect also for the stars, and a veneration for the sun and the moon.  (8.1.1) 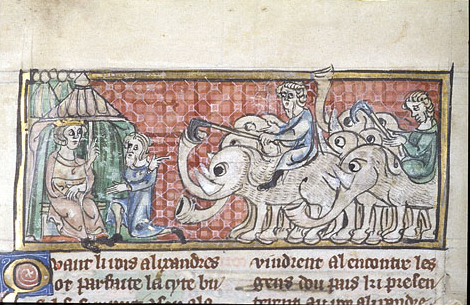