Nauk krstjanski za narod slovinski (‘Christian Doctrine for Slavonic People’) is an early Bosnian and Herzegovinian printed book, printed in Venice in 1611 by the Bosnian Franciscan Matija Divković (1563-1631). The book is a compilation from the catechisms published by Jacobus Ledisma (1519-1575) and Roberto Bellarmino, translated from Latin into Bosnian, arranged and interpreted by Divković. Divković’s typographical achievements and his Christian Doctrine will be discussed at the forthcoming Balkan Day seminar at the British Library on 13 June 2014.

On the title leaf above Divković explains that he wrote his book to be useful for both clerics and lay people. Under the image of the resurrected Christ, the imprint gives the place and the year of printing, the name and address of the printer, “Pietro-Maria Bertano by the church called Santa Maria Formosa”. The title leaf bears the ownership stamp of the British Museum Library, now the British Library, dated 10 January 1849, the date of purchase from the London bookselling firm of Rodd. This is the only known copy in Britain and the only edition from Bertano’s press in the British Library. The image above shows Jesus preaching to his apostles. The text on this leaf and the rest of the Christian Doctrine identifies Divković’s book as a typical work of the Counter-Reformation aimed at the revival of the Roman Catholic Church.

Here Divković explains that he translated the sacred texts into a “real and true Bosnian language” and further on he mentions “Slavonic language as in Bosnia Slavonic is spoken”. For Divković Bosnian, Slavonic and “our language”, the term he uses throughout the book, are synonyms for one language which is spoken by the people in Bosnia.

Divković’s Štokavian dialect was widely spoken in the lands which are today Bosnia and Herzegovina, Croatia, Montenegro and Serbia, representing one linguistic entity between Slovenian in the west and the Bulgarian  in the east. 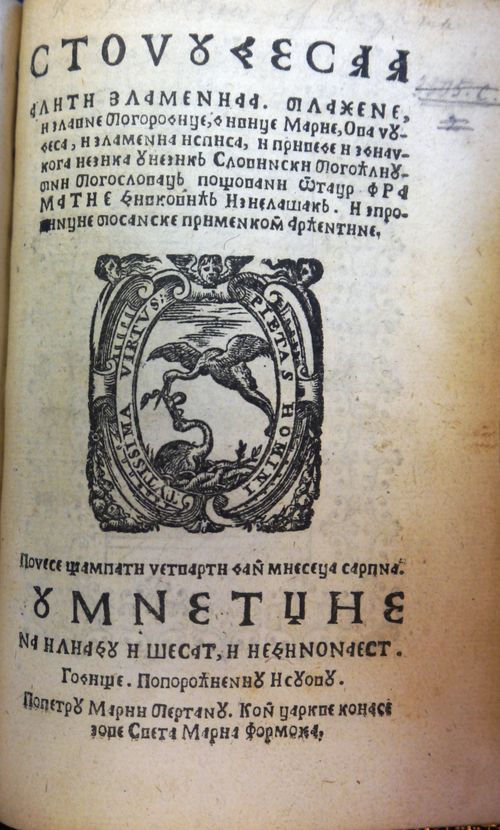 The above image shows Divković’s other work Sto čudesa (‘One Hundred Miracles’) bound together with the Christian Doctrine but foliated separately. The British Library has an intact copy in octavo format (Venice, 1611; C.38.e.40.). Both parts of the book have numerous misprints, which is understandable since Divković had his Cyrillic letters moulded in Venice by printers who didn’t know the language or the alphabet. A list of corrections is given at the end of the volume. 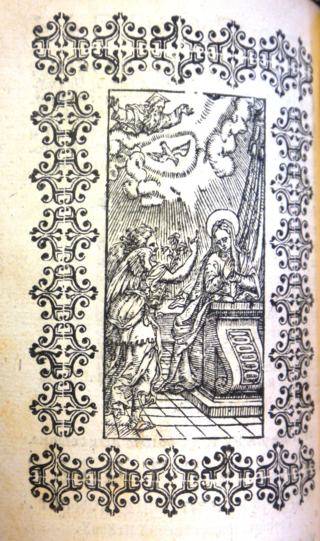 Divković’s book contains 12 woodcuts, 10 in Christian Doctrine and two in One Hundred Miracles. The  image of the Annunciation shown here is printed on the verso of One Hundred Miracles’s title leaf which has the motif of a stork feeding with the inscription “Pietas homini tutissima virtus” (Piety is the surest virtue of man).

Divković’s significance lies in the fact that his works have been widely researched and studied as part of the Bosnian and Herzegovinian, Croatian and Serbian written heritage to the present day. Most recently, to celebrate the 400th anniversary of the first imprint, the Bosna Srebrena Cultural and Historical Institute in Sarajevo published a critical edition of Christian Doctrine and One Hundred Miracles transcribed into Croatian as Nauk kristijanski za narod slovinski and Sto čudesa aliti zlamen'ja Blažene i slavne Bogorodice, Divice Marije. This critical edition was published together with a facsimile of the edition of Divković’s book printed by Pietro-Maria Bertano in Venice in 1611.

The language of his book, the Štokavian dialect, became the basis of the literary languages developed in Bosnia and Herzegovina, Croatia, Montenegro and Serbia in the 19th century.  In Bosnia and Herzegovina, Divković’s importance goes beyond the religious doctrine and church teachings that he spread in his homeland. His main legacy is his reputation as the first Bosnian typographer who printed the first Bosnian book in the language spoken by the people in Bosnia and in an alphabet that anyone in Bosnia could read. 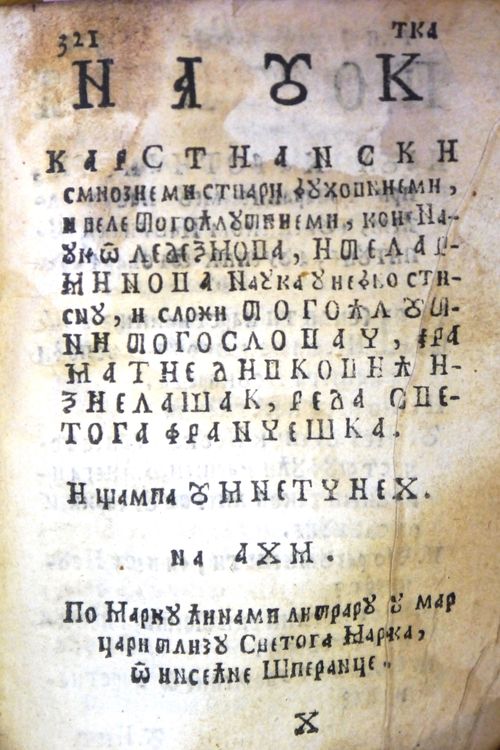 Divković is the author of four books; all are compilations from Christian literature popular in his time. The above image is a title-leaf of Christian Doctrine known as a “little Christian doctrine” (mali Nauk) printed in Venice 1616. The current research has identified 25 editions of this hugely popular small (16°) format of the work.

The British Library holds a copy printed by Marco Ginami (Venice, 1640-41; C.52.a.7.). It consists of 15 different religious works in prose and verse collected in one volume; one of them is Christian Doctrine, shown here as a constituent part of the work that bears the same title. This copy is one of two copies known to be in existence in Britain. It was acquired in 1889 from Nikola Batistić, a theology scholar and professor from Zadar, Croatia.