On 22 October 1816 Maria Geisweiler (1763-1840) wrote to the Home Secretary, Henry Addington, Viscount Sidmouth (1757-1844), about her husband and (more particularly) about the couple’s financial plight: ‘My Lord, the cruel anxiety, and distress of mind, under which I labour, is such I cannot again refrain from making an effort to interest your Lordships [sic] feelings, for my poor deranged husband’. (British Library Add. MS. 38263, f.304.)

Geisweiler and her Swiss-born husband Constantine (originally a printseller) had in the years 1799-1801 set up what can only be described as an extraordinarily ambitious programme to promote German literature in England. This comprised a bookshop (latterly in Parliament Street) selling imported German books, a short-lived literary magazine called The German Museum, and a series of translations of contemporary German authors for which both Maria and Constantine were responsible. In 1801 they travelled to Germany to promote their programme at the Leipzig Easter Book Fair and to solicit support from Goethe, Schiller and Wieland at Weimar. 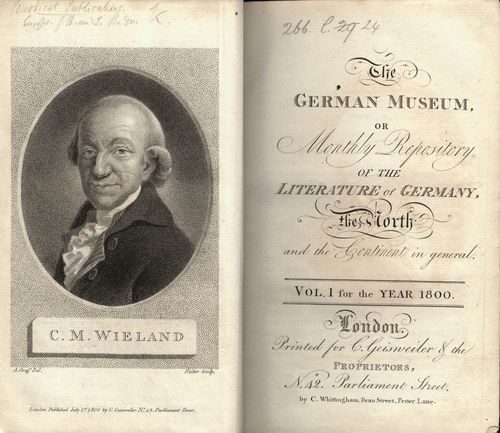 The first volume of The German Museum (London, 1800)

The Geisweilers’ literary efforts received what one might politely call ‘mixed’ reviews. The visit to Germany was also a failure and the business folded in 1801 or early 1802. About this time Constantine began to show signs of mental illness (described by one contemporary as a ‘Paroxysmus’). Although he tried other trades (dealing in wines), within a few years he was entirely unable to work. In April 1805 Maria, now over 40 years old, appears to have given birth to a son named Constantine who died very shortly after.

Clearly Maria needed great personal resources (and the help of others) to manage this situation. She had born in London into a typically bilingual Anglo-German family. Her father was a merchant called Frederick Heinzelmann, her mother an Englishwoman called Elizabeth. Maria’s background was therefore well-to-do. When she married the much younger Constantine in 1799 she was 36 years old and had already lost one, aristocratic husband (an unidentified Count von Schulenberg – Maria continued to style herself, and even her new husband, ‘de Geisweiler’).

By 1816 Maria’s situation must have been desperate. Nevertheless she tried to do her best for herself and her husband in possibly the only way she knew how, not merely by lobbying the government for financial support but also but by translating. In the same year as the letter to Addington she published the translation of an obscure German novel under the title Angelion, or the wizard of Elis. This received no better reviews than her earlier productions, the Monthly Review observing acidly: ‘We are sorry to describe this work as a singular and wearisome medley, displaying much of the sickly sentiment and strained antithesis of most German novelists’ (vol 83, 1817, p.100; 267.f.1-31). But the book was not necessarily a flop in the financial sense: no fewer than 175 persons are listed among the subscribers, including Baron Best, the head of the Hanoverian Legation in London, numerous other ‘persons of quality’, and leading English and Scottish booksellers. One suspects that the subscriptions were a discreet way of extending charity to the Geisweilers.

Maria Geisweiler died in 1840. Her husband survived her by nine years. Her attempts to secure his future may have been successful. At the time of the 1841 census he was living in a private ‘madhouse’ in Kensington. After his death in 1849 readers of the Morning Chronicle (19 June 1850) learnt that he may have died alone, but was not entirely without means: ‘Geisweiler, deceased. – If the next of kin of Constantine de Geisweiler, late of Kensington, deceased, will apply to Messrs. H. and O. Webb, 22 Sackville Street, they will hear something to their advantage’.