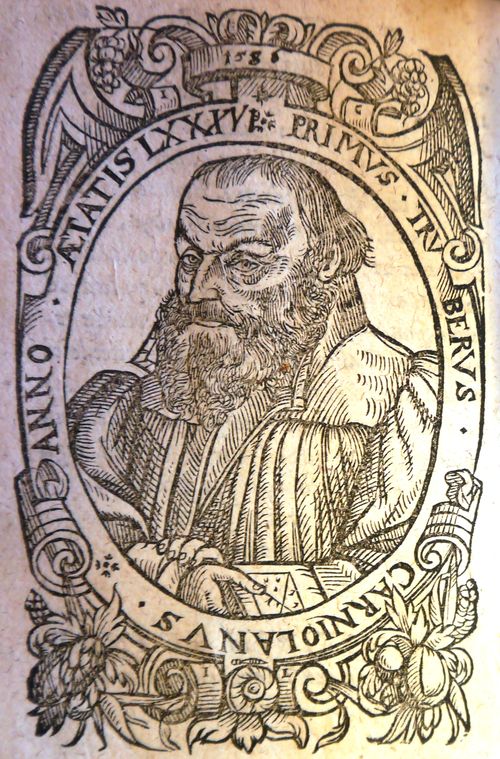 Woodcut portrait of Primož Trubar by Jacob Lederlein printed in the second edition of Trubar’s translation of the New Testament, (Tübingen, 1582) C.110.b.7.

Trubar’s literary and cultural legacy will be celebrated at the forthcoming Balkan Day seminar at the British Library on 13 June 2014.

As a Protestant priest Trubar believed that religious books should be written in a language that people could read and understand. He based the Slovenian literary language on the central Slovenian dialect spoken in his birthplace near Ljubljana, the provincial capital of Carniola. Trubar’s literary engagement becomes all the more important knowing that before him the Slovenian literary tradition was virtually non-existent and the German language was progressively introduced in administration and in church services in place of Latin. Trubar’s literary and educational activities aimed at the Slovenian people had achieved a long-term impact on the Slovenian national written heritage and cultural tradition during and long after the suppression of Protestant church activities in the Slovenian lands. 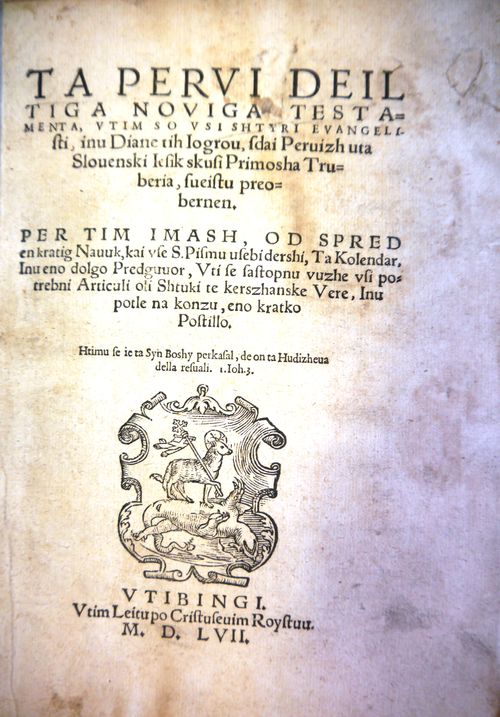 The image above is a title page of Trubar’s main work, a translation of the New Testament, which he accomplished over a period of 20 years from 1557 to 1577. Trubar used Latin for the Slovenian alphabet which most people could read and write. The only differences between Latin and Slovenian scripts were the new characters in the Slovenian Latin script for Slovenian sounds which did not exist in Latin and German languages. On the title page above, sh represents Slovenian sounds š and ž.

Trubar’s total output as an author, translator and editor consists of 26 Slovenian books; his last work was printed posthumously in 1595. His heterogeneous work included catechisms, primers, poems, prayers, devotional books, parts of the Old and New Testaments, theological interpretations, and a book of Protestant regulations. His opus is nearly a half of the total Slovenian Protestant book production of about 56 books. The Slovenian and Croatian Protestant books which survived the Counter-Reformation period are very rare today,  preserved in  only a small number of copies.

The British Library holds 13 of Trubar’s most important books, including the complete New Testament and the Catechism (Tübingen, 1575; C.110.b.6.) in Slovenian Latin, and in the Croatian Cyrillic and Glagolitic  alphabets. Some of Trubar’s books (C.110.a.15.(1- 4)) came to the Library in 1753 as part of the foundation collection of Sir Hans Sloane, but the majority were acquired in the 1840s and the last acquisition of an original edition by Trubar, a complete New Testament in Cyrillic (Urach, 1563, C.51.e.8.), a valuable and extremely rare book, was in 1953.

The Library’s collection of Trubar’s books is also very important for the study of Croatian Protestant literature and culture in the 16th century. Baron Hans von Ungnad, Freiherr von Sonnegg (1493-1564), a former provincial governor of Styria (Štajerska in Slovene), established a Bible Institute with a printing press in Urach near Tübingen (1560-1564). Trubar was appointed as a director of the Institute which employed nine people. Its  main aim was to produce Protestant books and to spread the Gospel to people of all faiths in Croatia, Dalmatia, Slavonia, Bosnia, Serbia, Bulgaria, and as far as Constantinople. To achieve this goal Trubar employed two Croatian Protestants, Stjepan Konzul Istranin (1521-1579) and Antun Dalmatin (d.1579), who translated his religious works into Croatian in the Glagolitic and Cyrillic alphabets. To complement this South-Slavonic enterprise, two Serbian Orthodox monks from Serbia and Bosnia, Matija Popović and Jovan Maleševac, were employed to proofread the Cyrillic script of Konzul’s and Dalmatin’s translations. 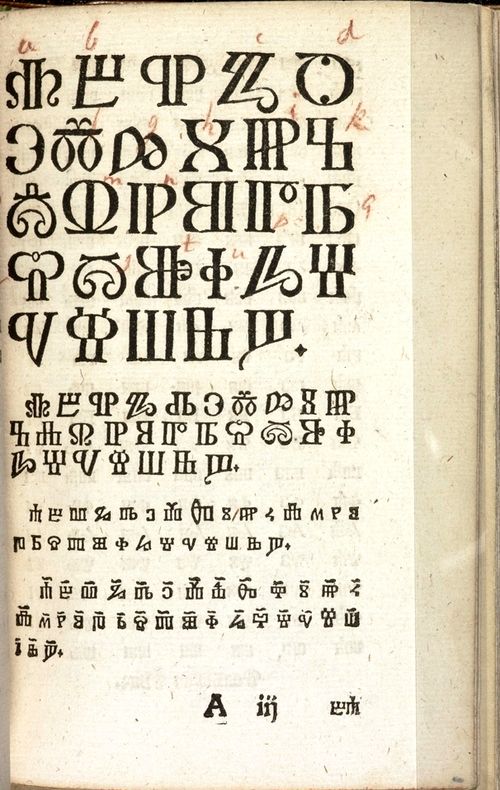 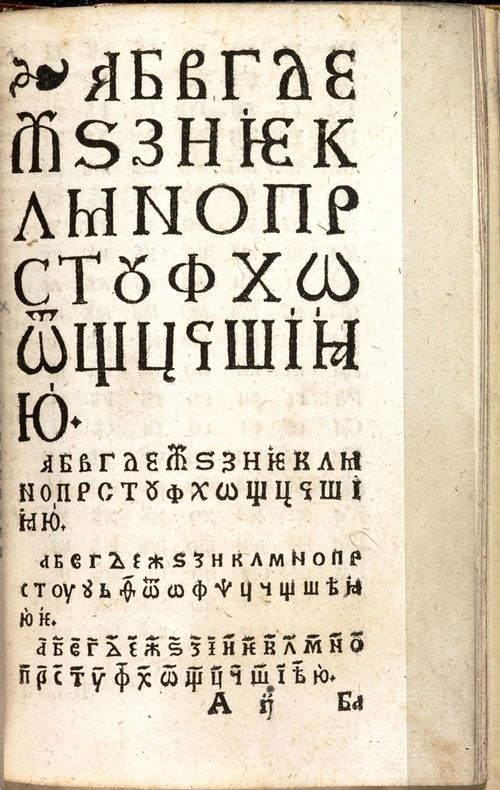 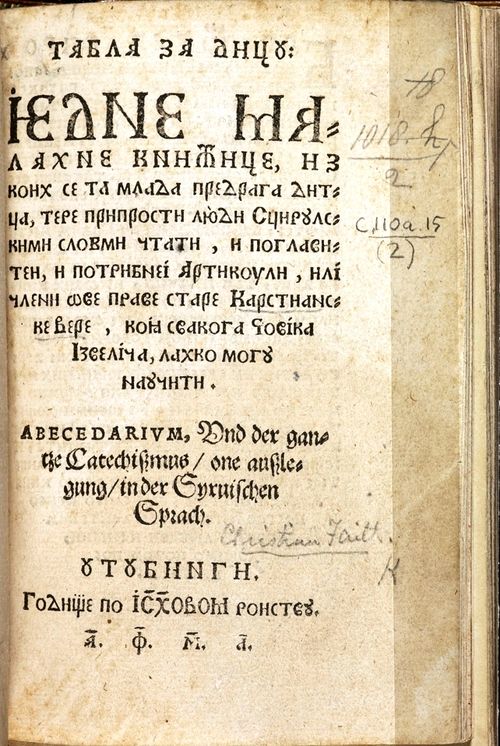 The title page of Trubar’s Primer which included a small catechism, Tabla za dicu, in Dalmatin’s translation and transcription into Cyrillic in the Ikavian (ikavica) variant of the Čakavian dialect of the Croatian language in Cyrillic script, considered also as Western Cyrillic.

The Library also holds a significant collection works about Trubar and Slovenian Protestant books and culture in the 16th century, acquired over a period of 170 years from 1844 to the present day. The collection includes works about Trubar in Slovenian, German and other languages; reprints and facsimile and bibliophile editions of Trubar’s works; and other primary source materials such as correspondence; there are transcriptions into modern languages and translations, collections and anthologies, fiction and poetry, biographies and bibliographies, exhibition catalogues,and anniversary books including the most recent celebration of the 500th anniversary of Trubar’s birth in 2008.

Digital versions of Trubar’s books and further references from the Memmingen city archive.

Digital version of Trubar’s posthumous book published by his son in 1595 from the Slovenian Digital Library.