Švejk in the First World War – and beyond

Jaroslav Hašek (1883-1923) was a Bohemian in every sense of the word. Before turning to literature, he had a chequered career as a chemist’s assistant, bank clerk and journalist, rising to become the editor of a magazine entitled Animal World.  Here, however, his overactive imagination proved his downfall; instead of writing informative articles about real animals he concocted highly plausible ones about imaginary creatures, and was sacked after advertising genuine werewolf puppies for sale – a notice which attracted interested enquirers. He pawned the office bicycle to buy drink, and was rescued from an apparent suicide attempt on Prague’s Charles Bridge by a theatrical hairdresser. His marriage in 1910 to Jarmila Mayerová was predictably short-lived, and after a year she returned to live with her parents. The union produced one child, a son named Richard, but Hašek’s immortality was assured far more successfully by the offspring of his imagination – Josef Švejk. 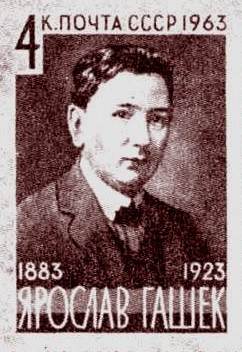 Hašek had originally intended Švejk’s adventures to fill six volumes, but when he died, aged 39, of heart failure caused by alcoholism and morbid obesity, he was just over halfway through, expiring at the beginning of volume four. His publisher Adolf Synek asked the journalist Karel Vaňek to complete the story with an account of Švejk’s adventures in Russia during the Revolution.

The novel begins with the news of the assassination of Archduke Franz Ferdinand, which reaches Švejk in his local pub, the Chalice (U Kalicha). On hearing that ‘they’ve shot our Ferdinand’, he announces that he knows two Ferdinands and neither is any loss – the first of a series of comic misapprehensions which marks his progress through captivity and military service, which he attempts to evade only to end up in a hospital for malingerers, his certification as an `official idiot’, being lost at a game of cards by a bibulous chaplain to whom he serves as batman, and his ‘anabasis’ to join his regiment on foot after missing his train and wandering halfway across Austria-Hungary.

Švejk is at once a very Czech figure and a universal one – so much so that he has even given his name to a psychological syndrome. In his combination of ingenuous slyness and blithe disregard for authority, his appeal transcends all national borders; the book has been translated into 60 languages including Esperanto (BL shelfmark YF.2010.a.700), dramatized for stage, screen and television, and turned into an opera. Visitors to Prague can not only visit Švejk’s favourite hostelry and enjoy the beer which he relished, but buy puppets whose features faithfully replicate the famous illustrations by Josef Lada which, for many readers, embody the character in classic form. After his creator’s premature death, Švejk lived on – and on. Inevitably such a colourful individual inspired sequels to his adventures – most notably, perhaps, Bertolt Brecht’s Schweyk im zweiten Weltkrieg, with settings of the songs by Hanns Eisler. The British Library also holds a little volume published in 1940 by an unknown author, Švejk in the Protectorate, (X.907/12094), issued by the exile publishing house ‘The Czechoslovak’. Here the narrative begins with an account of the Munich beer-hall bombing: ‘So they’ve nearly killed our Adolf…’, and the familiar characters from Hašek’s original novel appear in the sinister circumstances of what the preface describes as ‘a cruel and bitter satire where laughter is mingled with the fighting spirit of revenge and hatred’.

The novel was translated into English by Paul Selver in 1930, but in 1973 a second translation appeared by a figure who was closely associated with Czech studies in Britain, the diplomat Sir Cecil Parrott, who also wrote a biography of Hašek, The Bad Bohemian (X.989/52235). Having served in Czechoslovakia, he maintained a great affection for the country and amassed a considerable collection of Czech and Slovak books which he took with him on his retirement to Lancaster and, on his death, bequeathed to the university there. As Czech and Slovak were not taught at Lancaster, the collection was offered to an institution better able to make use of it, and in the early 1980s it travelled to Oxford. The ultimate result was the establishment of a fellowship by special election, held for over 30 years by the late James Naughton (1950-2014), and the growth of a flourishing tradition of Czech and Slovak studies there. Of all the unlikely twists and turns of Švejk’s picaresque progress, this is one of the most surprising, and would no doubt have bemused both the irreverent ‘good soldier’ and his creator – but needless to say, his adventures still hold a central place in the curriculum, as well as in the hearts of readers throughout the world.