Charles Bairnes, accused: a German on trial in 18th-century London

On 26th February 1783 a German servant named in the records as ‘Charles Bairnes’ (Benz?) was indicted at the Old Bailey for ‘feloniously stealing […] one gold watch chain, one gold watch key, one gold mourning ring and one small silver key, the goods of Charles Western, Esq.’. Bairnes was just one of the many thousands of young Germans in every walk of life who came to London during the eighteenth century to seek their fortunes. He had evidently not been in the country long enough to learn sufficient English in order to follow the court proceedings, let alone to argue his own case. The reaction of the Court to this clear disadvantage, was perhaps a little unexpected: ‘The prisoner being a German, was asked by the Court, whether he chose to have one half of the jury composed of his own countrymen, to which he replied in the affirmative, and the jury were sworn in’. It was apparently no trouble finding six German-speaking jurors and also an interpreter, one ‘John Bessel’. The court proceedings were apparently conducted in both languages so that the accused, judge, the whole jury and witnesses could follow them easily.

The English lack of interest in Germany and its language became a topos in German accounts during the 18th century. Among the numerous complaints by German-speaking residents and travellers, that of the writer Johann Christian Hüttner (d. 1847) is not untypical:

Among a hundred Englishmen, or even seventy Londoners, you will hardly find one that has the faintest idea about Germany. Just last August I met a surgeon in London from a well-known port city who asked me if it might be possible to sell a certain medicine on the other side of the Channel. I said I would ask a friend in Hamburg. ‘Hamburg?’, answered the surgeon, ‘I’ve often heard about that place  - tell me, what language do they speak there?’.  (Englische Miscellen. Vol. 1 Tübingen, 1800, p. 95-96. British Library P.P.3438.b. [My translation].)

The Bairnes case suggests, of course, a rather more complex situation. Not just that there was an extraordinarily large, German-speaking population in eighteenth-century London but acceptance of Germans and familiarity with the German language might have been greater than is often supposed – or is represented by contemporaries. Certainly Bairnes was treated fairly enough: not only was the trial largely conducted in his own language, as Mr. Western could supply no supporting evidence to support his accusations, Bairnes was found “not guilty”. 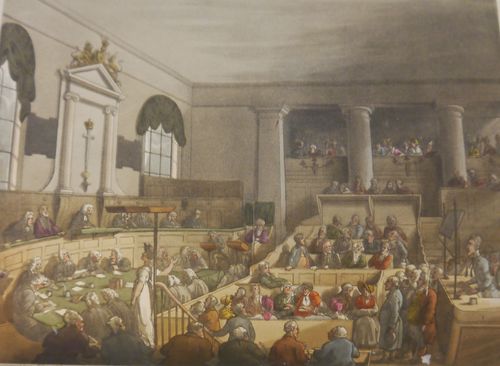