While Germans were taking Shakespeare to their hearts in the late 18th and early 19th centuries, Samuel Taylor Coleridge was hoping to similarly promote Schiller’s plays in England. But the German dramatist who briefly conquered the British stage of the day was a far lesser literary figure.

August von Kotzebue (1761-1819) was an immensely prolific writer, who produced over 200 plays as well as autobiographical and historical works, fiction and essays. He spent his life between his native Germany, Russia (including a brief period as a prisoner in Siberia) and Estonia. He was a somewhat controversial figure in the world of letters, and once wrote an essay with the telling title ‘Woher kommt es, daß ich so viele Feinde habe?’ (‘Why do I have so many enemies?’). His death was as melodramatic as anything in his plays: in 1819 he was fatally stabbed in his own home by a liberal student who detested Kotzebue as an embodiment of conservatism.

For a short period Kotzebue enjoyed great popularity in Britain. The English Short-Title Catalogue  lists a staggering 178 individual editions of his plays published between 1796 and 1800 in Britain and Ireland, with a further 48 in America, and there were many performances on both London and provincial stages, although these statistics are rather tempered by the fact that many are translations or adaptations of the same titles which were repeatedly reprinted and performed. Chief among these were Menschenhaß und Reue, Das Kind der Liebe, Die Versöhnung and Die Spanier in Peru, under various English titles. Translators and adaptors included Sheridan and the gothic author Matthew Lewis, as well as Maria Geisweiler whom we met in an earlier post  and who, of course, was both translator and publisher of her Kotzebue editions.

Although the Kotzebue publishing boom could not be sustained at such a level for long, his works remained popular on the British stage at least into the 1820s. Despite this public success, they were not well received by critics, and later literary historians have sometimes blamed Kotzebue’s popularity for damaging the wider reputation of German drama and keeping better-quality German works off the British stage.

However, if Kotzebue is known at all to the British public today it is indirectly, through the work of a literary contemporary who could not have been more different: Jane Austen. We know that Austen saw a performance of at least one of Kotzebue’s plays, Die Versöhnung (as The Birthday) in Bath in 1799. Sadly, her opinion of it is not recorded, but it has been argued that the play may have had some small influence on the characters and plot of Emma.

However, it is not in Emma but in Mansfield Park that a work by Kotzebue plays a crucial role. When the young Bertrams and Crawfords decide to pass the time with some amateur dramatics, they settle on Lovers’ Vows, Elizabeth Inchbald’s adaptation of Das Kind der Liebe, for their performance. Austen’s heroine Fanny Price, unhappy at the very idea of putting on a play, is doubly horrified to learn that it is to be this tale of illegitimacy and attempted seduction. As she fears, it offers opportunities for open flirtation in the guise of acting, which for some of the cast – and indeed for Austen as author – is of course the whole idea! 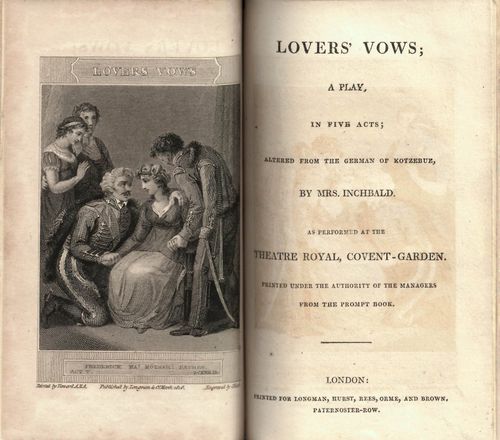 Austen never names the play’s author or translator, but the way in which she refers to the characters and action, and the significance of the roles in the play for her own characters, suggests that in the second decade of the 19th century Lovers’ Vows would have been recognisable and familiar to her audience. Her use of the play as a plot device has given it a tenuous modern afterlife, with synopses and discussions on the many Austen websites and even occasional performances. The cult of Kotzebue in Britain may have been short-lived, but on the back of the thriving cult of Jane Austen, he still has a tiny claim to literary immortality in this country.