The Balkan Day Seminar at the British Library on 13 June will celebrate among others the life and literary accomplishments of Marko Marulić (Marcus Marulus Spalatensis, 1450-1524)  who was the central figure of a humanist circle from Split and the most highly-praised Croatian personality of his time. Marulić has remained an inspiration to many generations in Croatia up to the present day, an author of considerable international influence and standing.

Marulić wrote mainly treatises on Christian morality drawing on the scriptures, and as a lay person of wide interests he found inspiration for his work in ancient scholarship and in humanist literature. Marulić’s significant and long-lasting legacy consists of Latin and Croatian epic poetry. 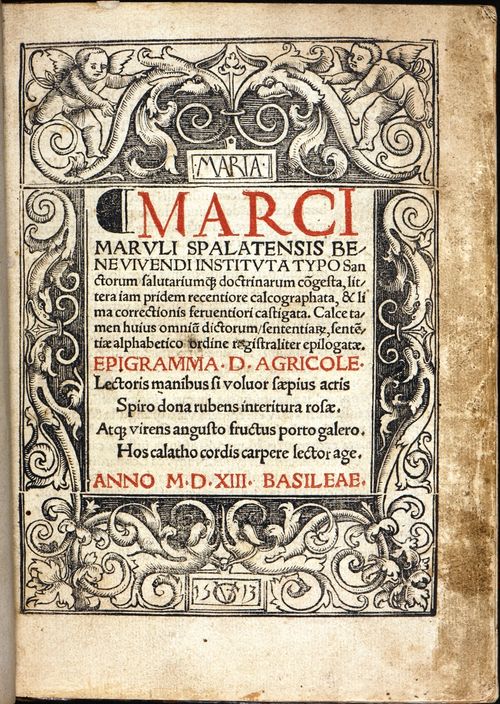 De institutione bene vivendi per exempla sanctorum (‘Instructions on How to Lead a Virtuous Life Based on the Examples of the Saints’), is a collection of moral tales and anecdotes from the Old and New Testaments. The first edition was printed in Venice in 1507. During the 16th and 17th centuries it was printed in 15 known editions, giving proof of the popularity of this book. The above is a title page of the printer Adam Petri’s exquisite 1513 edition. 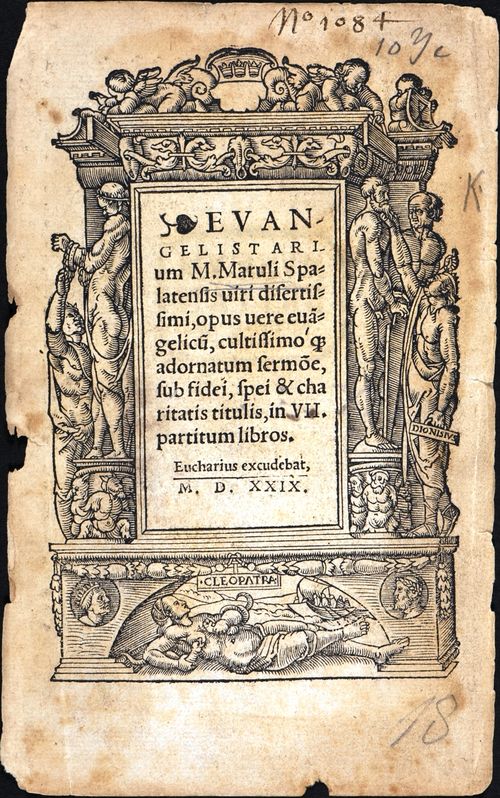 Euangelistarium (Evangelistary) is a seven-book treatise on Christian ethics, considered as Marulić’s main theological work and printed in 15 known 16th century editions. The copy pictured above, printed by Eucharius Cervicornus in Cologne in 1529, belonged to Henry VIII and contains his manuscript notes; it came to the British (Museum) Library as part of the Old Royal Library. 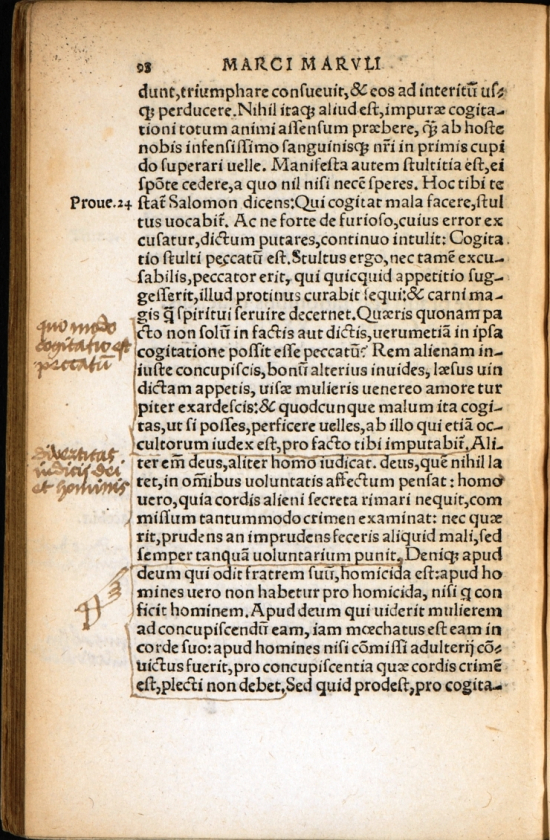 Henry VIII’s annotations in his copy of the Evangelistary (843.k.13.), with marginal notes and a drawing of a pointing hand to highlight the printed text, which reveals the king’s interest in theology. 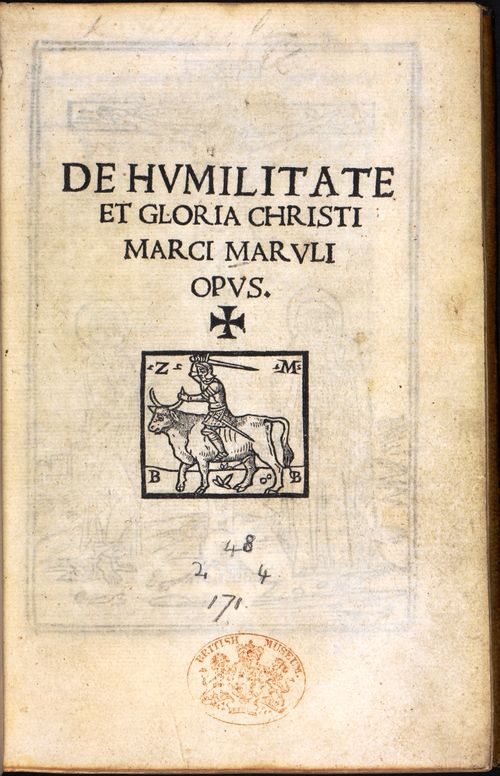 De humilitate et gloria Christi (‘Christ’s Humility and Glory’) is Marulić’s third major work on moral theology, printed with the aim of providing useful examples for a virtuous life. The copy pictured above  was printed in Venice by Bernardino Vitali in 1519.

Latin was used in the Croatian lands until the mid-19th century, when the vernacular gradually replaced it in administration and as a literary language. Šime Jurić’s Latin bibliography, Iugoslaviae scriptores Latini recentioris aetatis: Pars 1, Opera scriptorum Latinorum natione Croatarum usque ad annum MDCCCXLVIII typis edita (Zagreb, 1968-71, ZF.9.b.735), lists over 4500  Croatian Latin works and works about Croatia to 1848. Croatiae auctores Latini, a digital collection of Croatian Latinists and Latin texts about Croatia, provides information on about 180 authors and Latin texts from a 10th-century epitaph to Ton Smerdel’s collection of poems Pontes lucentes (Zagreb, 1962, 11566.a.10.) and Ivan Golub’s Latin poems published in 1984. Over 50 Croatian Latin writers of all periods are represented in the British Library collection in the original and in subsequent editions and reprints.

‘Carmen de doctrina Domini nostri Iesu Christi pendentis in cruce’ (‘A Dialogue between a Christian and Christ hanging on the Cross’) is a poem originally printed in the first edition of Marulić’s De institutione (Venice, 1507) and reprinted afterwards in all the Latin editions as an appendix. It was translated into English by Philip Howard (St Philip Howard), 13th earl of Arundel (1557-95)  and serves as an introduction to his translation of An Epistle in the person of Christ to the faithfull soule by Johannes Justus Lansperger, which was secretly printed in England some time before 1595; the British Library’s copy (1019.c.35.) is pictured below. In the late 15th and early 16th century poetry evolved in Croatian  in addition to Latin. Marulić is the author of the first printed secular work in Croatian, an epic, Judita, based on the Book of Judith, ‘u versih hrvacki složena’ (‘in Croatian verses’), printed in Venice in 1521. Judita is written in the Ikavian variant of the Čakavian dialect (čakavsko-ikavski). Marulić wrote this epic for people who couldn’t understand Latin: ‘Tuj historiju čtući, ulize mi u pamet da ju stumačim našim jazikom, neka ju budu razumiti i oni ki nisu naučni knjige latinske aliti djačke.’

A digital version of Judita (Venice 1522, 2nd edition) is available from the Croatian National and University Library digital heritage. 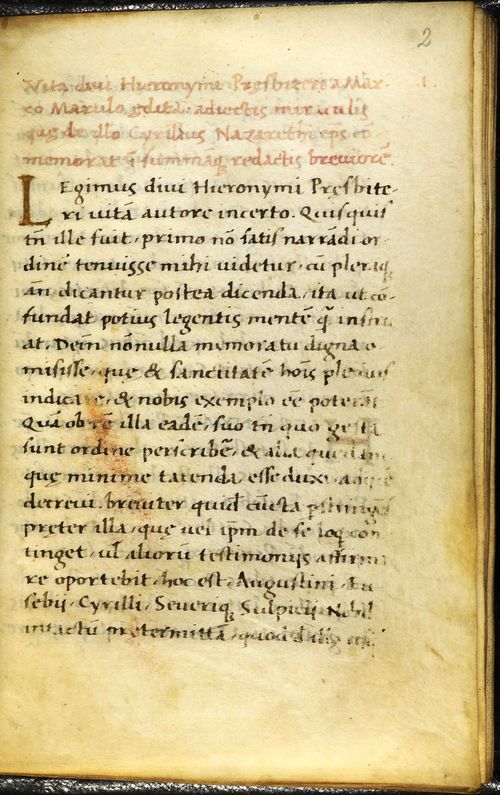 Vita Divi Hieronymi (Life of St Jerome) is an autograph work by Marulić dating from 1507. This is the title leaf of a codex on fine vellum which comprises 42 folios held in the British Library (Add. MS 18.029).

For further information about Marulić, his bibliography and digital versions of his works, visit The Marulianum Marko Marulić Institute in Split, Croatia. For the British Library’s holdings see our Marulić catalogue.