13 June is the feast day of St Anthony of Padua.

This charismatic saint, born circa 1195 in Lisbon, where you can still see his house, first joined the Canons Regular of St Augustine at the age of 15; in 1220 he took a level transfer to the newish Ordo Fratrum Minorum (Franciscans to you and me), taking his name from the house of St Anthony Abbot.

The Franciscans, like the Dominicans, were primarily preachers, and although Anthony performed a portfolio of healing miracles – he re-attached the foot of a man who had cut off it off in remorse at kicking his mother – perhaps his most memorable act was to preach to the fishes.

Anthony’s attempt to preach in Rimini to two-legged heathens having resulted in rejection, he addressed a school of fishes. Many traditions merge here. We all know that St Francis, founder of the Order, preached to the birds, and Anthony was doubtless inspired to follow his lead. The Portuguese are a maritime people, and perhaps Anthony was recalling his childhood on the strand at Lisbon. Perhaps too he was invoking Christ’s recruitment of Peter and his fishermen to be fishers of men. Another element is the idea that when a mixed audience hears a charismatic preacher each person is convinced that he spoke to them in their own language: Anthony’s sermons are preserved in Latin; he might not have spoken fish, but that was surely what the fishes heard. 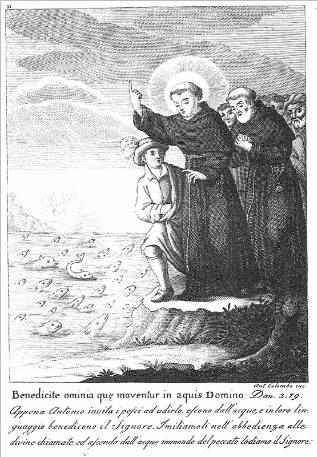 St Anthony preaching to the fish.

Some four hundred years later, Portugal’s most famous preacher of the early modern period paid homage to the Saint. Father Antonio Vieira, SJ (1608-97) divided his long life between metropole and periphery, as missionary to the Indians (with the formidable linguistic skills instilled by the Society, he learned Tupi for the purpose of preaching) and as counsellor to King John IV. As much a courtier as a voice in the wilderness, he preached to Queen Christina of Sweden in her Roman retirement.

On the saint’s day in June 1654, three days before he left Maranhão for Portugal, he spoke to the people of Brazil. Addressing his human audience as ‘fishes’, his is partly a political message: the big fishes eat up the little ones. By praising the virtues of fishes (they were spared by the Lord from the ravages of the Flood), he castigates the vices of men. And in true baroque style he draws some somewhat whimsical analogies between land- and sealife. A splendid new edition of his works is in preparation.

Most of St Anthony’s life was spent in Padua, and in the Basilica del Santo  (which outshines the cathedral there) you can view from a respectful distance his chin, his larynx and – what could be more medieval and simultaneously baroque? – the charismatic preacher’s tongue.