Through a glass darkly: the poetry of Francisco de Quevedo 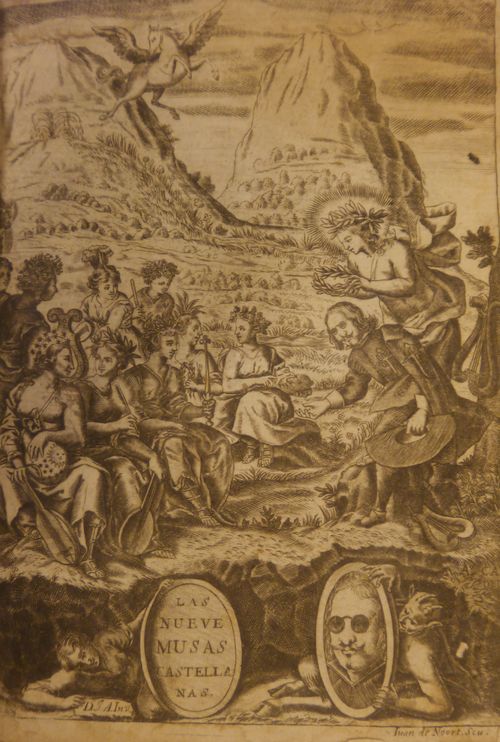 In the main picture he’s being crowned with the laurels on Mt Helicon and delighting the Muses.  Pegasus is kicking the mount to release the Hippocrene spring. The book is an edition of Quevedo’s poetry put together by the author, arranged by him under the names of the Muses and taken up after his death in 1645 by his friend José Antonio González de Salas.

But underground he’s keeping some distinctly dodgy company: his portrait is being admired (up close and personal) by a satyr.  One implication is that Don Francisco was one of those “satyrs that write satyres” (Sir Thomas Browne). Although he wrote in most genres, satire was closest to his own atrabilious nature. Perhaps the idea is that because there was no muse of satire (the nearest was Thalia, muse of comedy) some other figure had to be recruited.

But take a look (I use the word advisedly) at those trendy shades.

First of all, although, as we learned at last year’s exhibition ‘Art under Attack: Histories of British Iconoclasm’  at Tate Britain, when iconoclasts attack works of art they first aim at the eyes, these are original and not the work of a doodler.

Secondly, the glasses with which Quevedo was most closely associated – and to which he gave his name – were pince-nez, in Spanish, quevedos.

Thirdly, nomen est omen. His very name referred to vision. He told the story, ‘Wherever I go, people know me. I was in Rome once, and an Italian man came up to me and exclaimed, “Che vedo?” [What do I see?]’

Last – and most importantly? – whatever glasses the great man may have worn in real life, in the emblem-fixated culture of the seventeenth century these lenses symbolised acuity of vision as much mental as physical, and acuity of vision was equivalent to acuity of wit: in Spanish, agudeza.

Alciati’s emblem of a hand with an eye embedded in the palm teaches a lesson close to our man’s heart: Believe only what you can see: