Tauchnitz and Marinack: the famous and the unknown bringing English literature to the Germans

When I started thinking about topics for this series of Anglo-German blogs, publishing and bookselling were naturally on the list, not least the famous Tauchnitz Verlag in Leipzig which published  English literature in the 19th and early 20th centuries. I didn’t expect that an enquiry received in the course of my regular work would alert me to other English-language publishing ventures in 19th-century Germany and to one not at all famous Englishwoman hoping to bring the best of British poetry to the Germans.

To start with the better-known figure: Christian Bernhard Tauchnitz established his publishing house in 1837, and began issuing his ‘Collection of British Authors’ in 1841. At a time when international copyright law was in its infancy, Tauchnitz’s policy of offering fair payment in return for the right to publish and distribute the works of British (and later American) writers on the continent appealed to both authors and publishers in the Anglophone world, and he won many clients and friends among them. 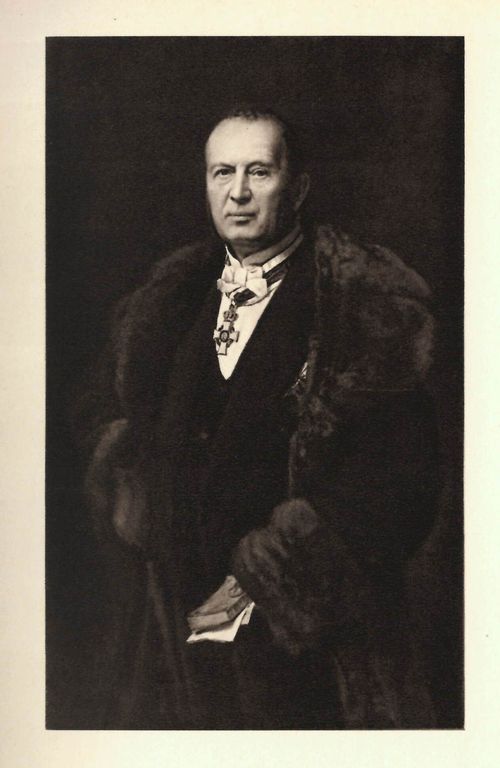 Portrait of Christian Bernhard Tauchnitz, from The Harvest; being the record of one hundred years of publishing, 1837-1937, offered in gratitutde to the friends of the firm by Bernard Tauchnitz (Leipzig, 1937)  2710.k.29.

In theory, Tauchnitz’s books were only for sale in continental Europe and bore warning messages against importing them to Britain. This sometimes led to speculation that the books were pirated, whereas in fact the reverse was true: Tauchnitz editions were fully authorised for distribution on the continent but not allowed to compete with the authors’ British publishers on home ground. But many British travellers who purchased Tauchnitz novels while abroad simply brought them back home without any thought for the niceties of publishing and copyright, making the brand familiar even to stay-at-home Britons. The British Library holds one of the world’s largest collections of surviving Tauchnitz editions, the Todd-Bowden collection.

In establishing his business Tauchnitz had an eye for the growing market among English-speaking travellers abroad, but his aim was also to make English literature in the original language available and better known to the German reading public. He was by far the most successful German publisher to venture into this field, but not the only one.  Others, hoping no doubt to rival Tauchnitz’s success, also established series of English literary works, and this is where our less famous figure comes in.

In 1861, one Mary Maria Marinack edited an anthology entitled Selections from the Works of the British Classical Poets... for the illustrious Brockhaus Verlag. The enquiry which  I mentioned came from someone who had a copy of this book and wanted to know more about both it and its compiler. To my surprise I quickly found a reference to Marinack in the standard German biographical dictionary, Allgemeine Deutsche Biographie (ADB) – not in her own name but as the wife of a German schoolmaster and educationalist, Karl Eduard Niese. The daughter of “a cultured English family”, born in 1829, Mary married Karl Eduard in 1861 and the couple established a highly successful preparatory school in Thuringia, which even received royal approval when two Princes of Saxe-Weimar were enrolled there. 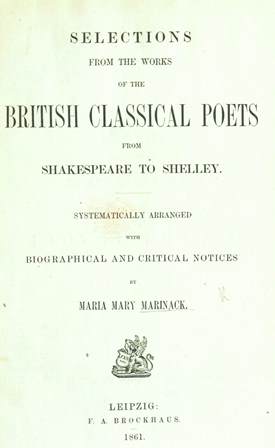 Selections from the works of the British Classical Poets from Shakespeare to Shelley. Systematically arranged with biographical and critical notices by Maria Mary Marinack. (Leipzig, 1851). 11602.f.8.

In the preface to her work Marinack says that an “increase of the general interest throughout Germany in English Literature, particularly Poetry” and her own “fervent admiration for my native Poets” inspired her to compile the collection. No doubt with her husband’s profession in mind, she adds that she has sought “to avoid all that is improper for the perusal of youth” so that “this volume may be safely recommended to the heads of the higher Schools and Institutions.”

At around the same time as Selections from the Works of the British Classical Poets, Brockhaus also published an eight-volume ‘Library of English Poetry’. Marinack’s anthology, although not in that series, was probably part of the same initiative to break into the English-language market.  However, the venture enjoyed little success and was not continued, which probably explains why Marinack’s proposed second and third volumes also came to nothing.

We may know little about the details of Marinack’s life, but she represents not only the personal ties between England and Germany through her marriage, but also the cultural exchange between the two countries in the 19th century. Furthermore, her role in Brockhaus’s brief English-language publishing venture tells a small part of a wider Anglo-German book trade story, one where the infinitely more famous Bernhard Tauchnitz is a major figure.