In 1844 the German doctor and writer Heinrich Hoffmann was looking for a book to give his three-year-old son for Christmas. Fed up with the dull, moralising tales on offer, he decided to create his own book, telling the stories of children who meet various – often exaggeratedly brutal – fates as a result of their bad or foolish behaviour. The stories are written in lively rhymes with cartoonish illustrations, in many cases integrated into the text and telling the story visually alongside it like a forerunner of the modern comic book. Hoffmann was encouraged to publish the result the following year and so Der Struwwelpeter was born. It was an instant success and, when an English translation appeared in February 1848, became a bestseller in Britain too, aided by clever and catchy translations of the original verses. 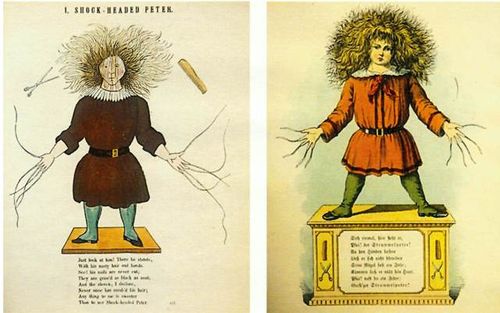 The  book was soon established as a nursery classic in Britain and to those brought up in the later 19th and early 20th centuries, a reference to ‘Harriet and the matches’ or ‘Johnny Head-in-Air’ would have been instantly familiar. The characters, stories and accompanying pictures formed an easily recognisable basis for political or social comment and caricature, much as the Alice books with Tenniel’s illustrations still do today. A German Politischer Struwwelpeter appeared as early as 1849, and an English Political Struwwelpeter  50 years later. 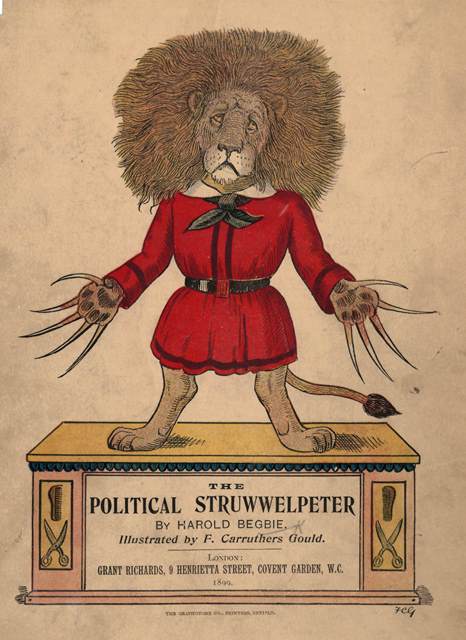 On the outbreak of war in 1914 both German and British writers reached again for Hoffmann’s book as a basis for satire. The German Kriegs-Struwwelpeter replaces the naughty children with representatives of the various anti-German allies, while the poems in E.V. Lucas’s Swollen-Headed William all describe the misdeeds of Kaiser Wilhelm II. You can read more about both books and see digitised images on our World War One webpages. The Second World War also produced a British parody, Struwwelhitler, ascribed to ‘Dr Schrecklichkeit’ (‘Dr Horror’; the real authors were Philip and Robert Spence). 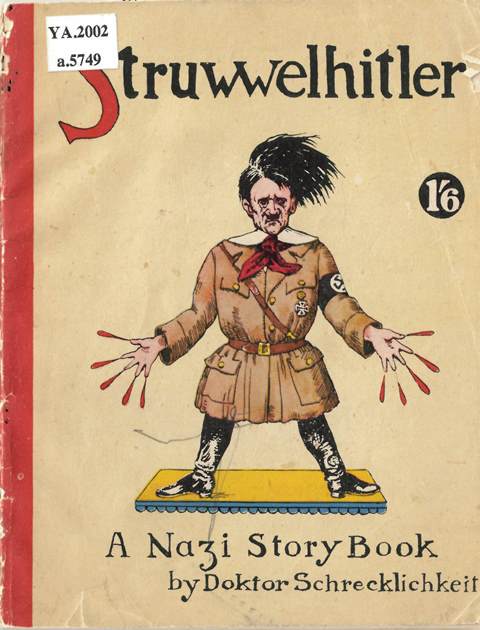 Struwwelpeter also seems to have developed the kind of cult status among Victorian and Edwardian adults that classic children’s television programmes enjoy among their modern descendants; a review of a stage version in the London Times of 23 December 1912 speaks of ‘the childish stories which bearded men have been known to shout at each other across dinner tables’. The Marlborough Struwwelpeter, written and illustrated by a pupil in his last year at Marlborough College, turns the stories into tales set around the school and is full of in-jokes about its traditions and characters. It is no doubt just one chance survivor of many such local parodies. 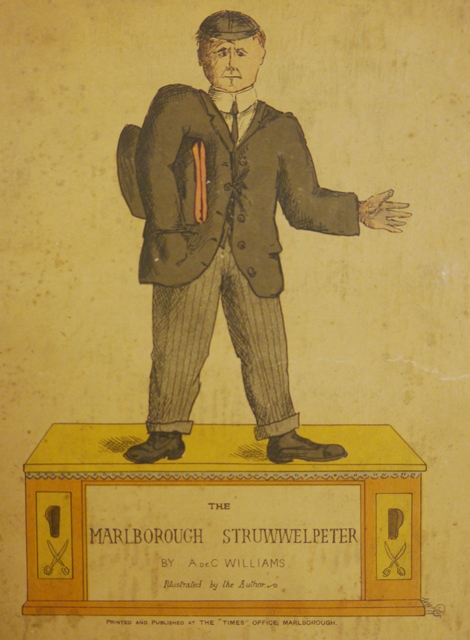 Today, however, Struwwelpeter is generally out of favour as a children’s book. It is still in print in Germany, but probably intended more for nostalgic adults or collectors than for children. In Britain it has been out of print for many years and is generally only mentioned in newspaper articles about the ‘most shocking’ (or ‘nastiest’, ‘most horrific’, etc.) children’s books ever. Since the 1960s, those who read it as children have, with some exceptions, queued up to say how it terrified and traumatised them. Stories usually picked out as particularly gruesome are those of Harriet (Paulinchen in German) who plays with matches and is burnt to death, and Conrad/Konrad, whose punishment for thumb-sucking is to have both thumbs cut off by a tailor with giant scissors (‘the great, long, red-legg’d scissor-man’ in the English version). 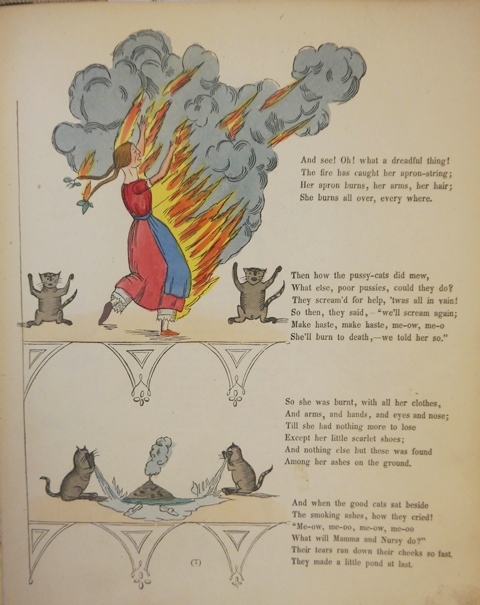 There is a tendency now to describe Struwwelpeter as a sadistic and authoritarian attempt to frighten children into obedience and make them conform to a rigid social code. But in fact Hoffmann wrote it as a reaction against books which he thought were overly moralistic or blandly accepting of social norms. Some tales even challenge contemporary attitudes: a huntsman is shot by his intended prey, and three boys who mock a black man are punished. Even in the most ‘horrific’ tales, the very exaggeration of the children’s fates, both in the stories and the accompanying illustrations, was intended for comic rather than frightening effect. This tradition has continued in Britain through Hilaire Belloc’s Cautionary Tales and Harry Graham’s Ruthless Rhymes to the works of Roald Dahl and the focus on ‘all things wicked, weird and woeful’ in the highly successful Horrible Histories books. Struwwelpeter was also successfully reinvented for new audiences in the late 1990s as the ‘junk opera’ Shockheaded Peter.

Looking at the book in this context, and especially considering its design, it is perhaps not unjust to place it also in the tradition celebrated in our current exhibition Comics Ummasked – that of the subversive and anarchic comic book, that ‘challenge[s] categorisation, preconceptions and the status quo’. Like many of the comics in the exhibition, Struwwelpeter has been loved and hated, treasured and condemned in equal measure, and its legacy and influence will continue to be debated.