Turbulent priest and polemical playwright: the life and death of Kaj Munk

In 1955 the winner of the Golden Lion at the sixteenth Venice International Film Festival was an unlikely choice. Ordet (The Word), the only film which brought its director Carl Theodor Dreyer  critical or commercial success during his lifetime, portrays life in a Danish rural community, telling the story of the farmer Morten Borgen and his three sons Mikkel, Anders and Johannes. From the opening shot of white sheets fluttering in the sea-wind to the final transfiguring scene of a miracle which resurrects Mikkel’s wife and heals the schisms and religious conflicts among the villagers, the simplicity and directness of the film gives it a timeless quality which ensures its classic status almost sixty years after its release. Yet those who admire it may know little of Kaj Munk, the author of the play which Dreyer had adapted for the screen, whose life was as dramatic as any of his works. 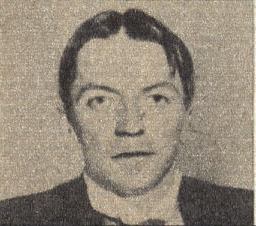 Kaj Harald Leininger Petersen (1898-1944, picture (left) from Wikimedia Commons) was born on the Danish island of Lolland and, after being orphaned at an early age, was fostered by a family named Munk whose name he adopted. He was ordained as a Lutheran pastor, and in 1924 was appointed to Vedersø, a parish in western Jutland. Widely read in history, philosophy and modern drama, he translated Hamlet into Danish (1938: BL shelfmark X.955/51), and his admiration for Shaw and Ibsen is evident in the plays which he began to write in 1917 with Pilatus (first published in 1937: Cup.400.f.15); Ordet (1925: published in 1932; X.909/23062) was the second of these. Like Ibsen, he frequently set the action in bygone days – mediaeval Denmark or biblical times – which emphasized the ageless nature of the moral dilemmas confronting his characters while placing them at a ‘safe’ distance from the increasingly dangerous times in which he lived.

Throughout the 1930s Munk viewed the rise of Hitler and Mussolini with growing concern. He had initially acclaimed Hitler’s achievement in providing a rallying-point for a united Germany, which he felt lacked a counterpart in Scandinavia, but came to repent of his ill-judged remark and spoke out with increasing vehemence, culminating in 1938 with an open letter to Mussolini published in the newspaper Jyllands-Posten attacking the persecution of the Jews.

Munk’s concern proved to be justified when, in 1940, Hitler occupied Denmark. He continued to use drama as a means of openly criticizing Nazism, as in Niels Ebbesen (1942; 11756.b.6), whose hero, a mediaeval Danish squire who assassinates another German invader, Count Gerhard III, represented an obvious parallel to the current situation. Such figures combined the dramatic importance of a central character prepared to suffer for deeply-held beliefs with Munk’s conviction that in perilous times a single strong leader was needed to act decisively and steer the people to safety.

As Munk’s opposition to Nazism and those prepared to collaborate with it grew ever more vociferous, his friends tried to persuade him to go underground, but he refused to, preaching increasingly outspoken sermons, culminating in one which he delivered in spite of a Nazi ban in Copenhagen Cathedral on Advent Sunday in December 1943 (, published as a special issue of the magazine Folk og Frihed; P.P.7256.da.(2.)). A month later, on 4 January 1944, he was arrested by the Gestapo, and the following morning his body, with an abusive note claiming that he had worked for Germany anyway, was discovered in a ditch on a country road near Silkeborg. His death proved to be the turning-point in rousing resistance to the German invasion, with 4,000 Danes attending his funeral; his body was subsequently taken back to his parish church for burial, and his widow Lise was granted permission by the Danish government to live in the parsonage until her death in 1998. 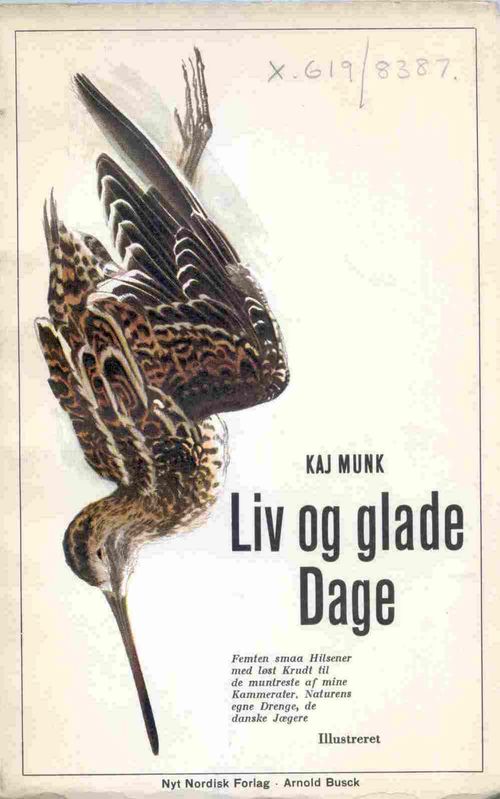 To the last years of his life Munk continued to write lyrical poetry, such as the collection Liv og glade Dage (‘Life and happy days’; Copenhagen, 1936. X.619/8387), affirming the beauty of creation as well as expressing intransigent moral opposition to the outrages of his times. His life bore witness the words of Martin Luther: ‘I cannot and will not recant anything, since it is neither safe nor right to go against conscience’, and by his death he at last gave the Danish people the focus they needed, in his view, to turn against their oppressors. He is commemorated as a martyr in the Lutheran church’s Calendar of Saints on 14 August.

Two recent translations of works about and by Kaj Munk are available at New Nordic Press:
Kaj Munk and Germany, and
By the Rivers of Babylon