A Teuton take on tartan: Sco(t)tland and the Germans

Although I have used the title ‘Anglo-German Centuries’ to describe this series of blog posts, the intention was always to look at cultural ties between Germany and the whole of Britain. With the Scottish independence referendum imminent, this seems like a good moment to reflect specifically on Scotland in this context.

The early Hanoverian monarchs showed little personal interest in Scotland; since they had replaced the Stuart dynasty (which had ruled Scotland since the late 14th century) and had faced various Jacobite attempts to regain the crown, a certain wariness is hardly surprising. It was not until George IV’s visit to Scotland in 1822 that the increasingly anglicised Hanoverians also began to embrace their inner Scot and remember their Stuart ancestry. From here we can perhaps date the British royal family’s particular affection for Scotland, which continues to this day.

The man primarily responsible for this was Sir Walter Scott, who persuaded George IV to make his visit and the Scottish nobility to welcome him (and all concerned to don tartan kilts). But Scott was not just instrumental in introducing Britain’s ‘German’ monarchs to his country; he was also an important mediator of German culture in Britain. In his early twenties Scott had become fascinated with German literature – ‘German-mad’ as he later described it, His first published work was a translation of two ballads by Gottfried August Bürger in 1796 and the following year produced the first English translation of Goethe’s Götz von Berlichingen. 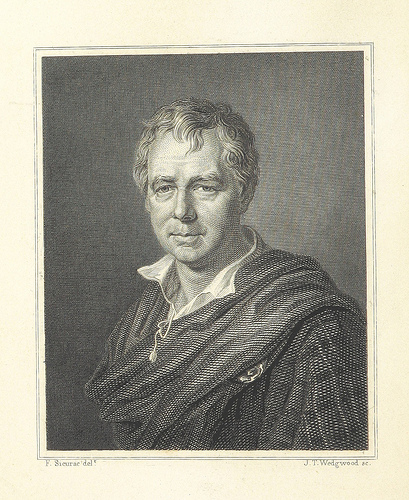 Scott maintained an interest in German culture and literature throughout his life, and was influenced by the activities of the German writers and scholars who were rediscovering and recording national folklore and mediaeval literature (he corresponded for example with Jacob Grimm). He also encouraged Robert Pearse Gillies, another Scottish enthusiast for German literature, to found the Foreign Quarterly Review (London, 1827-1846; 268.h.15.), a journal devoted to continental literature. Through its pages Gillies introduced Heinrich Kleist, among others, to British audiences.

Scott was among the 15 British admirers who presented Goethe with a golden seal on his 82nd birthday and was thanked in a poem addressed to ‘Fünfzehn englischen Freunden’. Chief among these ‘English’ friends was another Scot, Thomas Carlyle, who had begun a correspondence with Goethe after translating Wilhelm Meisters Lehrjahre. Carlyle was another great 19th-century champion of German literature and thought in Britain; indeed, in the words of the critic R.D. Ashton, he ‘became convinced that he alone knew anything about German literature … and that it was his duty to teach it’, and he continued in this mission for all his writing life.

Germans were also taken with Scotland and its culture. James Macpherson’s ‘Ossian’ poems were influential to the writers of the ‘Sturm und Drang’ and Romantic movements (and of course play a climactic role in Goethe’s Werther).  A combination of Macpherson’s work and actual Hebridean scenery inspired Felix Mendelssohn’s overture known both as ‘The Hebrides’ and ‘Fingal’s Cave’, and the same tour of Scotland inspired his ‘Scottish Symphony’.

Both Scott’s and Carlyle’s own works were well-received in Germany. Richard Andree, a German traveller to Scotland in the 1860s, described Scott as ‘the man who has brought Scotland’s history closest to us Germans’. On arrival in Edinburgh he hastened to pay his respects at the Scott memorial, but when he visited Scott’s former home at Abbotsford he was somewhat disappointed by the stout guide who ‘smelt alarmingly of whisky’ and took quantities of snuff as she showed him round: ‘an unpleasant addition to the rooms where The Lady of the Lake was written’.

In Edinburgh Andree almost immediately encountered fellow-Germans working there: three Swabian waiters at his hotel and a group of Palatine musicians busking in the street. This comes as something of a surprise as Scotland generally attracted far fewer Germans to work or settle in the 19th century than London or some of the northern English cities. Nonetheless, by the end of the century Edinburgh and Glasgow each had sufficient German populations to support a German church, so Andree’s waiters were part of a trend, if only a small one. (The musicians may have been a more itinerant group – he later encountered them again in Inverness.) A salutary reminder that sometimes the term ‘Anglo-’ is not enough when looking at British- German relations between 1714 and 1914.