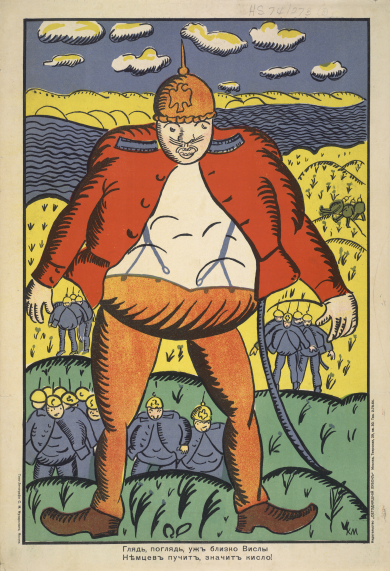 “Look, just look, the Vistula is near”. Poster designed by Kazimir Malevich with caption by Vladimir Mayakovsky (Moscow, 1914). HS.74/273(3)

Having just viewed the excellent Malevich exhibition at Tate Modern, I was reminded that many of the images on display appear in items held by the British Library. For example the figure of an officer on one of the series of anti-German propaganda postcards in the “Works on paper” section with the caption “Look, just look, the Vistula is near” appears again on one of the lithographed posters Malevich designed for the project “Today’s Lubok” in the same year. In both the postcard and poster (which uses different colours) you can already see the tendency towards depicting the human figure as being made up of geometrical shapes, the use of bright colours (also found in Russian folk paintings or lubki) and the stylised patterns (e.g. to depict grass) of contemporary Primitivist paintings. 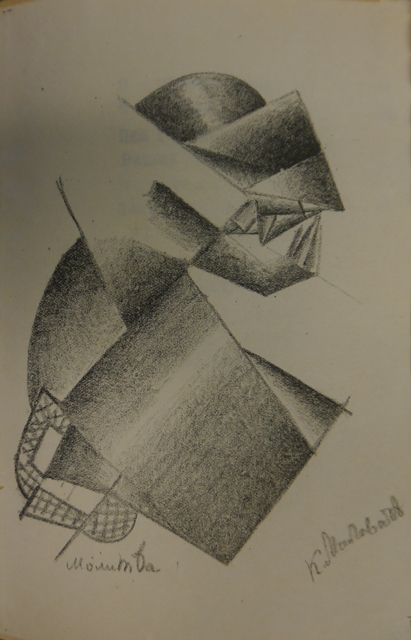 Also included in the “Works on paper” section of the exhibition is Malevich’s “Molitva” (Prayer). This appears in the lithographed Futurist publication Vzorval by Aleksei Kruchenykh (known in English as “Explodity”). It is in the Cubo-Futurist style which combines the multi-viewpoints and cylindrical machine like shapes of Cubism (cf. Léger) with the dynamic approach of Futurism though here applied in the Russian manner to a static meditative pose rather than depicting movement.

During his Futurist period Malevich developed the theory of alogism where colour is divorced from the object that is being depicted. This combined with the irrationalism of the Russian Futurists can be seen in  An Englishman in Moscow (1914) where objects of different scale and unnatural colour are combined in a surrealistic collage. 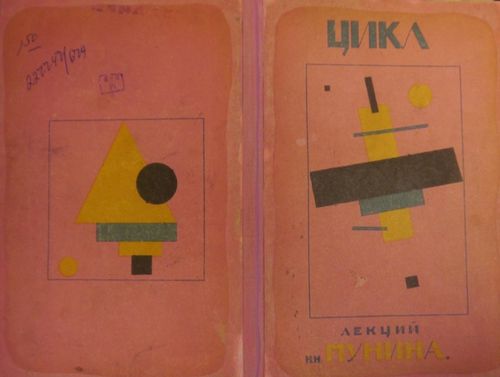 There are several examples of book covers designed by Malevich included in the exhibition. One also held by the British Library is his cover for Nikolai Punin’s, Pervyi tsikl lektsii (First cycle of lectures). This cover exemplifies the use of bright colours and geometrical forms of Malevich’s abstract Suprematist  style for a book about drawing in modern art. 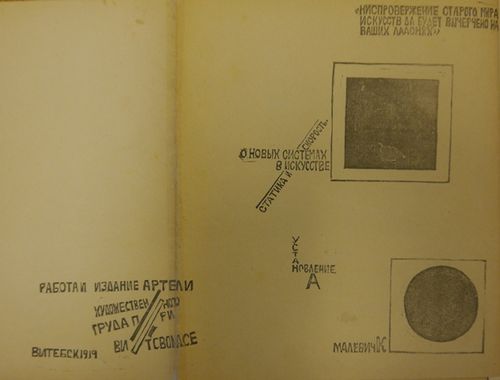 In 1919 Malevich joined the art school set up by Chagall in Vitebsk. Here he began to produce books that promoted Suprematism as the correct method for modern art. His ideas were elucidated further in the manifesto O novykh sistemakh v iskusstve (On New systems in Art) published in Vitebsk in 1919. This publication was hand produced in the Art School by transfer lithography with a linocut (see above) by El Lissitzky. It was republished in abbreviated form by Narkompros as Ot Sezanna do suprematizmu (From Cezanne to Suprematism) in 1920. (C.127.g.11.) 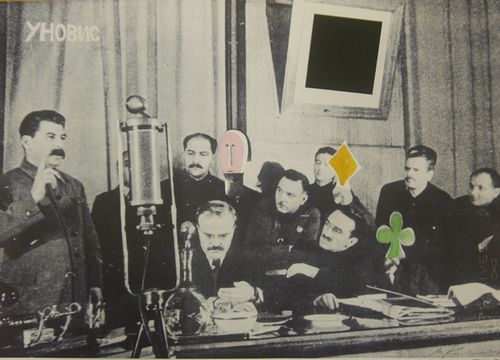 “A spiritualistic séance in the Kremlin” from  Mikhail Karasik, Utverditeliu novogo iskusstva. (St Petersburg, 2007). HS.74/1966. Reproduced by permission of the artist.

An interesting use of Malevich’s Suprematist imagery can be seen in Mikhail Karasik’s artist’s book of 16 lithographs entitled Utverditeliu novogo iskusstva  (To the Affirmer of the New Art). In No.6 “A spiritualistic séance in the Kremlin: Stalin calls upon the spirit of Malevich” his black square and a robotic looking figure together with the letters of the artists’ collective UNOVIS are merged into a contemporary photo of Stalin making a speech.

Other original works by Malevich held by the British Library: