A Variety of Vampires

The average English-speaking reader, if asked to draw a picture of a vampire, would probably be inspired by Bram Stoker’s description of Count Dracula as portrayed in our current exhibition Terror and Wonder: The Gothic Imagination – a suave, sinister figure inhabiting a mysterious castle from which he makes nocturnal sorties to spread terror throughout Transylvania, returning at daybreak to lurk in his coffin, replete with blood which trickles from a corner of his mouth. But Transylvania does not have a monopoly on vampires – and not all vampires have fangs.

Stoker, of course, was an Irishman, from a country with a rich tradition of eerie stories of its own. However, much closer to the home of Dracula (remember those sheepskin-clad Slovaks whipping up their horses to carry their mysterious load on the first stage of the Count’s voyage to Whitby), two authors writing in Czech conjured up their own versions of the legend – as different as the writers themselves.

At first sight Jan Neruda (1834-91)  seems an unlikely character to spin tales of the supernatural. Although he is best known today to non-Czech readers for his short stories, it is his Povídky malostranské (‘Tales of the Lesser Quarter’) which secure his reputation, with their lively accounts of the people and streets of old Prague. However, he was also a widely-travelled writer of feuilletons, and it is not Prague but the Greek island of Prinkipo which provides the setting for his story Vampýr (‘The Vampire’), published in an 1880 edition of his collection Arabesky (British Library YA.1997.a.13960(2)).

The narrator and a friend have been enjoying a holiday in Istanbul, and at the end of their stay they decide to make an excursion by boat to Prinkipo, accompanied by a Polish family – father, mother, a delicate daughter with a slight dry cough, and her fiancé. Neruda describes the idyllic landscape, with its leaping dolphins and the fragrance of the ancient pines, in detail, and the party decides to take lodgings in a local hotel run by a Frenchman. While relaxing in the sunshine, they catch sight of a mysterious artist, a Greek with flowing black hair, pale face and deep-set dark eyes, sketching nearby; he had travelled on the same boat, but slips away almost unnoticed, only to be heard quarrelling with the innkeeper as they return. The latter explains that he is known as  ‘the Vampire’ because whenever anyone dies in the area he appears at once with a likeness captured in advance, ‘like a vulture,’ as the disgusted innkeeper remarks. At a sudden shriek from the mother, holding her fainting daughter in her arms, the bridegroom races after the artist and hurls him to the ground. From his portfolio flutters a sheet of paper – a sketch of the young girl, eyes closed, a myrtle wreath encircling her brow.

Karel Hlaváček (1874-98), who himself succumbed to tuberculosis at the age of 23, might appear a more likely creator of vampires despite being one of the founder members of the athletic Sokol movement and the president of its Libeň branch in Prague. He was also, however, a representative of both the Decadent and Symbolist movements, and published several collections of poems in this spirit. One of these, Pozdě k ránu (‘Late towards morning’; Prague, 1896; X.907/10067, published in a limited edition of 200 copies), includes a poem entitled ‘Upír’ (The Vampire), in which the poet describes his vision of an unknown country ‘without shadow, without light’ which no-one had ever visited before. Here a strange being appears ‘in the pale colours of a delicate old lithograph’, his heavy brows overshadowing green eyes with pupils huge and black as if from atropine, hovering on black wings at once velvety and metallic. The last descendent of a once mighty line of dukes, kings and magnates tremble before him, and their daughters long for him silently and secretly. The poet apostrophizes him as a ‘proud white barbarian, lover of all that is sick and pale … living off the vital force of the juices of virgins … symbol of decadence!’, returning  ‘late towards morning from mystical orgies’ just as ‘in the accursed yesterday and rotten tomorrow’… 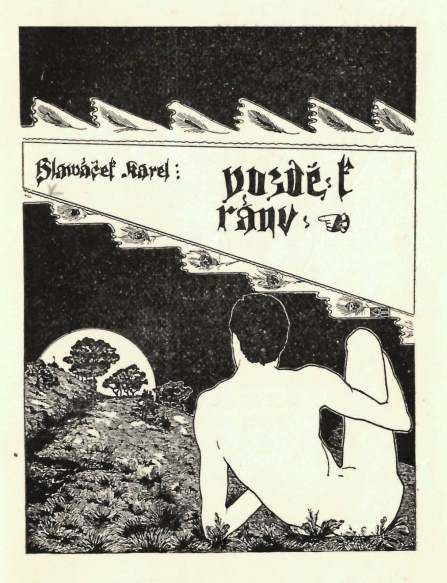