One book, many faces: the Nobel laureate Patrick Modiano

When the French novelist Patrick Modiano (b.1945) was announced as the winner of the 2014 Nobel Prize for Literature, many readers in the English-speaking world reacted with incomprehension. Even allowing for the notoriously low percentage of publications each year represented by foreign literature in translation, this might be understandable, as none of his books has aroused  the international curiosity or controversy as those of Michel Houellebecq or Michel Tournier. Revisiting the same themes and employing similar stylistic devices, he has instead provoked certain critics to see this as recourse to a tried and tested formula or lack of imagination. At the very outset of his career, in 1975, Modiano himself remarked in an interview that he did indeed have the feeling that he had been repeatedly writing the same novel from the beginning.

There is no excuse for those with a limited knowledge of French to neglect his novels, as several have been translated, including Le quartier perdu as A trace of malice (1988; Nov. 1988/2400) and Voyage de noces (Honeymoon, 1992; YK.1993.a.1120).  The more one reads, the more apparent it becomes that instead of rehashing old material for want of new ideas, Modiano is probing more profoundly into subjects of timeless significance and constantly honing and refining the tools which he employs.

Interestingly, for an author whose use of language is so subtle and polished, Modiano’s first tongue was not French but Flemish, in which he was raised by his maternal grandparents who cared for him during the frequent absences of his mother, the actress Louisa Colpijn, and father Albert Modiano who, despite his Sephardic Jewish origins, had evaded deportation during the Second World War, trading on the black market and actively associating with the Paris Gestapo. This clouded background influences many of Modiano’s writings, including the one for which he may be best known outside France:  the screenplay for  Louis Malle’s film Lacombe, Lucien (1973; screenplay published Paris, 1974: X.909/29206), which explores the protagonist’s involvement with the French Gestapo when he is rejected by the French Resistance. Modiano’s very first novel, La place de l’Etoile (Paris, 1968; X.908/17202), is the initial statement of a theme which so enraged his father that he attempted to buy up the entire print-run, experiencing this wartime story of a Jewish collaborator as a personal attack. 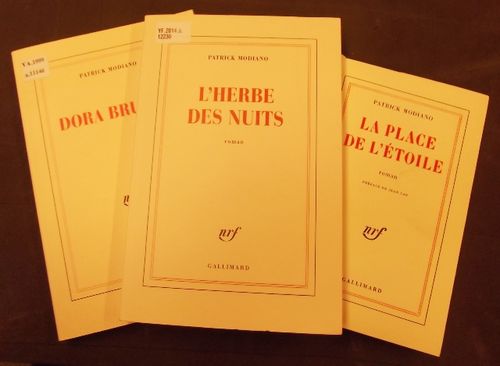 Throughout his career Modiano returns to the themes of, memory and loss, the fallibility of recollection, the fragile nature of identity and the many ambivalent elements of which it is composed. He sometimes draws on factual material, as in Dora Bruder (Paris, 1997; YA.1999.a.11146. English translation Berkeley, Calif., 1999; m00/17481), inspired by an item in a 1941 number of Paris Soir which set him on a search for a 15-year-old Jewish girl who escaped from the convent which had sheltered her, only to end up on a transport to Auschwitz. His characters struggle with amnesia or with troublingly persistent memories; they search for the families, loves and past which they have lost or remember only in fragments. Yet amid this atmosphere of rootlessness and displacement   Modiano also displays a startlingly detailed sense of place, most evident in his vivid evocation of the landscape of Paris. Appropriately, he received the telephone call from his daughter announcing his award, the crown of a career in which he had also won the Prix Goncourt, Austrian State Prize for European literature and  Prix mondial Cino Del Duca, as he was walking near the Jardin du Luxembourg.

It was a meeting with the writer and critic Raymond Queneau which launched Modiano’s career by bringing him into contact with the Parisian publishing house Editions Gallimard. His style, however, has little in common with that of the author of Exercises du style and Zazie dans le métro; indeed, he has been described as the Marcel Proust of his time. Outside French literature, though, one might compare him to another European writer whose work is tinged and haunted by the same feeling of loss and hallucinatory quality of wandering through a landscape which is now bewilderingly strange, now painfully familiar – W. G. Sebald. Both share an ability to act as the remembrancers and consciences of an age threatened by the consequences of an amnesia which is all too deliberate.