Ploughing, scattering and translating, or, You know more German hymns than you think.

Around this time of year churches in Britain are celebrating Harvest Festival, and many congregations will no doubt sing the favourite seasonal hymn ‘We plough the fields and scatter’. But  not many of the singers may be aware that this seemingly integral part of a British – or at least an Anglican – Harvest Festival service is in fact a translation of a German hymn, ‘Wir pflügen und wir streuen’, with words taken from a poem by the 18th-century German poet Matthias Claudius.

The English translation first appeared in 1861 in a collection entitled A Garland of Songs: or an English Liederkranz compiled by Charles S. Bere, a Devon clergyman. Bere was apparently something of a Germanophile: in a preface he speaks admiringly of the role played by vocal music in German homes and communities and expresses the hope that his English collection of secular and religious songs will encourage a similar culture among his compatriots. The translator, modestly described as “a lady … who wishes to be nameless”,  was Jane Montgomery Campbell (1817-1878). Among her other contributions to the collection is a version of ‘Stille Nacht’ beginning ‘Holy Night, peaceful night’ (the more familiar – and frankly better – translation ‘Silent Night’ was made two years earlier by an American Episcopal priest, John Freeman Young). 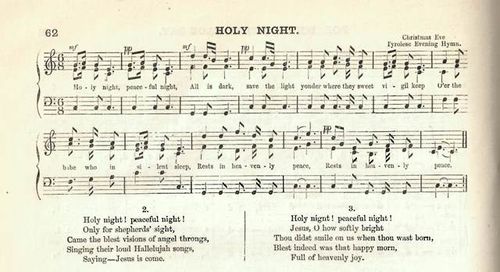 Jane Montgomery Campbell’s translation of ‘Stille Nacht’ from A Garland of Songs.

German hymns had been making their way into English for a long time before Bere and Campbell collaborated on their Garland. The Latin-German macaronic carol ‘In dulci jubilo’ and Luther’s ‘Ein’ feste Burg’ appeared in English versions as early as the 16th century, and John Wesley made some translations from German in the 18th century. But the 19th century was the golden age of German-English hymn translation. For example, most of us know  ‘Ein’ feste Burg’ best in Thomas Carlye’s translation as ‘A safe stronghold’ (or in another 19th-century American translation as ‘A mighty fortress’), and most of the German hymn translations in the Church of England’s standard hymnal, Hymns Ancient and Modern, date from this period.

Perhaps the most active 19th-century translator and promoter of German hymns in  Britain was Catherine Winkworth (1827-1878). Winkworth really deserves a blog post to herself: she was not only a translator but also a social reformer and a pioneering advocate of women’s higher education, but here we must restrict ourselves to her collection of hymn translations, Lyra Germanica, which first appeared in  1855. Winkworth moved in intellectual Christian circles where contemporary German theology was much admired. The hymns in Lyra Germanica – over a hundred in all – were translated from a collection compiled by the ambassador and scholar Karl Josias von Bunsen (Winkworth’s sister Susanna also translated one of Bunsen’s prose works on theology). Winkworth followed up the success of her first series of translations with a second series and a study of German devotional lyrics, Christian Singers of Germany. 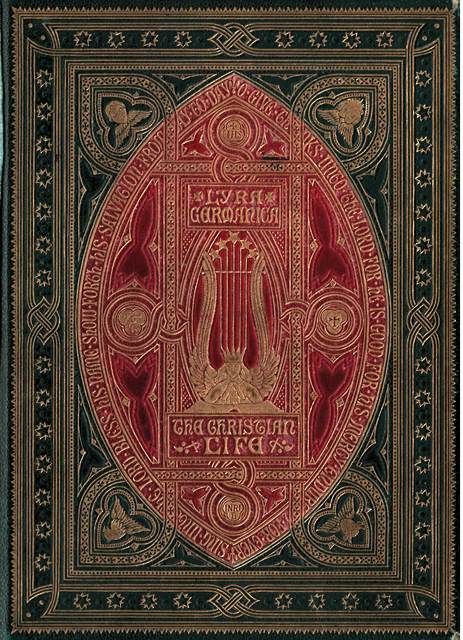 Binding from an 1868 luxury edition of Lyra Germanica (3434.f.19.), designed by John Leighton who was also one of the illustrators.

Although only a small percentage of the many hymns Winkworth translated are in general use today, those that are remain some of the most familiar and recognisable German hymns in Britain. The latest edition of Hymns Ancient and Modern (now simply called Ancient and Modern) includes six of her translations, perhaps the best known being no. 739 ‘Now thank we all our God’ (‘Nun danket alle Gott’) and no. 765, ‘Praise to the Lord’ (‘Lobe den Herrn’). Other German hymns in the collection include no. 9 ‘When morning gilds the skies’ (‘Beim frühen Morgenlicht’) translated by Edward Carswell and no. 181 ‘O sacred head surrounded’, Henry Williams Baker’s translation of Paul Gerhardt’s ‘O Haupt voll Blut und Wunden’. It is also worth noting that many of the tunes  in the book – for both German and other texts – are of German origin.

German hymns, then, are still sung in churches up and down the country, but it seems that they are waning somewhat in popularity. ‘Silent Night’ still holds its own in polls of favourite carols (although it has lost the top spot in recent years to a French rival, ‘O holy night’), but the only German entry in a recent BBC vote for ‘The UK’s top 100 hymns’ was ‘Now thank we all our God’, languishing at no. 65 in the chart. However, there is a German element within a wider European story behind the hymn which topped that poll, ‘How great thou art’. This is based on a Swedish original, and the most familiar English translation is by Stuart K. Hine, who discovered it when working as a Methodist missionary in the Carpathian Mountains in the 1930s. He translated it from a Russian version which was based in turn on an earlier German translation.

So whether at harvest time, Christmas or in the church year generally, an ‘English’ hymn may have an international story to tell. And if you are a churchgoer, you probably know more German hymns than you think.

Lyra Germanica: Hymns for the Sundays and Chief Festivals of the Christian Year, translated from the German by Catherine Winkworth. (London, 1855). 3436.f.27.