The naval battle of Lepanto, fought off the western Greek coast on 7 October 1571, was hailed as a victory against the Ottoman empire as much artistic as political. It was sung in hendecasyllables by the greatest poets of the time (Góngora cut his poetic teeth on this subject at the age of ten with the ballad ‘Desbaratados los cuernos’, if indeed it is his). The most famous casualty was Cervantes, ‘el manco de Lepanto’, who lost his arm. We, though, might be more familiar with G.K. Chesterton’s stirring work of 1911. 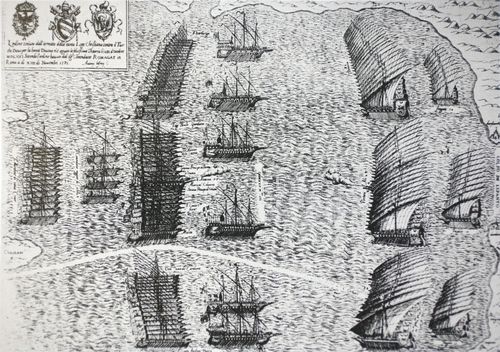 The commander of the Christian fleet, Don John of Austria, sported a magnificent galley adorned  with emblems and Latin mottoes such as a painting of a face-off between an elephant and a rhinoceros sharpening their ‘horns’ and the motto ‘in utrumque paratus’ [‘prepared for either side’, i.e. ‘death or victory’]’ (Cull, p. 163). Such decorative schemes for warships were not unique to Spain, as Cull notes.

The record of the appearance of the galley is patchy. There is no known picture. What we have is a written decorative scheme which was criticised and improved by Juan de Mal Lara, humanist of Seville. Mal Lara’s text was used in 1971 as the basis for the replica now displayed in the Museu Marítim, housed in the former shipyard of Barcelona. 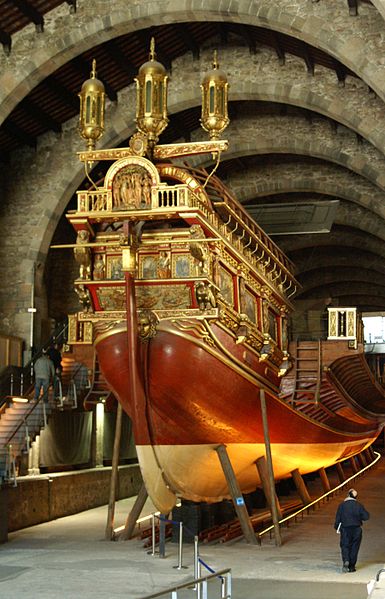 Doyen of emblematics John Cull argues that the improving symbols and texts functioned as a mirror of princes, advice directed at Don John.  As Mal Lara said, ‘the galley itself should serve as a book of memory which, open at all hours, would instruct don Juan in all of its parts as to what he should do’ (Cull, p. 146).

But I wonder if the intended effect was in fact apotropaic, like the eyes which superstitious Mediterraneans still paint on their boats to ward off evil.  At a higher literary level, in the Roman de la Rose, the vices are depicted on the outer wall of the Garden of Love, to indicate that they have no place inside.

On a practical level, the Turks at Lepanto may not have been great Latinists (though they used Latin in diplomacy), but this need not have inhibited the Spaniards. They knew the enemy would get the message.