I’ve no need, or desire, to give you here potted histories of the vicissitudes of the Catalan language and its literature, with their controversial political aspects and problems of definition, as they’re well covered by Wikipedia. In anticipation of the conference ‘Language and the Making of Nations’ to be held at the British Library on 14 November, I thought it would be more interesting to look at a few examples of the happy relationship between Spanish (alias Castilian) and Catalan as reflected in the BL’s collections.

Nobody nowadays is monolingual in Catalan, although it is of course perfectly possible for people outside Spain to be bilingual in, say, Catalan and German.

Bilingualism may well be more common than monolingualism, although bilingualism doesn’t necessarily mean equality of status for both languages or that both are used in all contexts.  For centuries educated people were as fluent in the Latin they learned at school as in the vernacular they imbibed with their mother’s – or even their wetnurse’s – milk.  But of course Latin and the vernacular had different spheres of activity.

Spanish was spoken at the Catalan court from the 15th century onwards, when poets composed in both languages; and linguisticians study the dialect of Spanish now spoken in Catalonia (see Sinner, below).

1. The oldest Catalan-Spanish dictionary in the British Library appears to be: 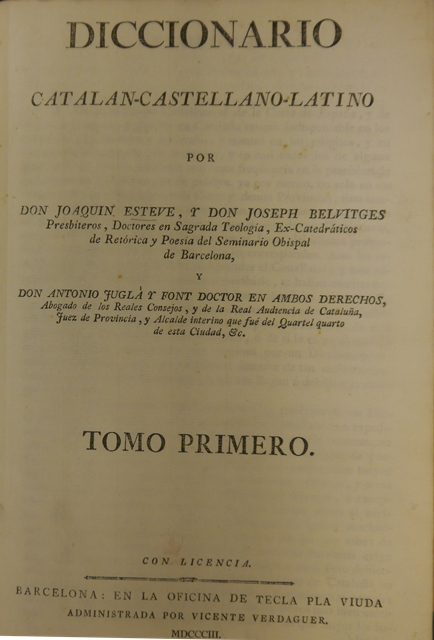 These three gentlemen have all the qualifications one could wish for (wouldn’t you like to have doctor utriusque iuris on your c.v.?). Their audience is Catalans who need to express themselves in Spanish in ‘tribunals, academies and pulpits’ not only in Spain as a whole but also ‘without leaving their houses’. 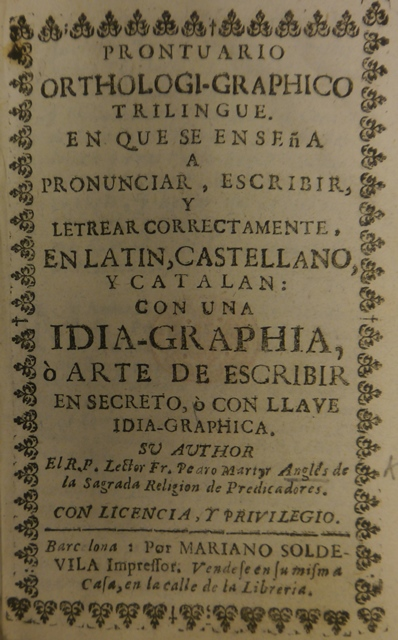 Writing in the medium of Spanish (after all, he says, the grammar of Greek, Hebrew  and oriental languages are expounded in Latin), Anglès treats Spanish and Catalan on equal terms, though both have to cede prestige to Latin.

3.  Last but not least, the popular drama of  19th-century Barcelona and Valencia abounds in short pieces (sainetes/sainets, entremeses/entremesos) described on the title page as ‘pieza bilingüe’.  So far as I can determine, the linguistic divisions are drawn accurately: characters speak Catalan among themselves, and when joined by a Spanish speaker pass into Spanish as a matter of courtesy. 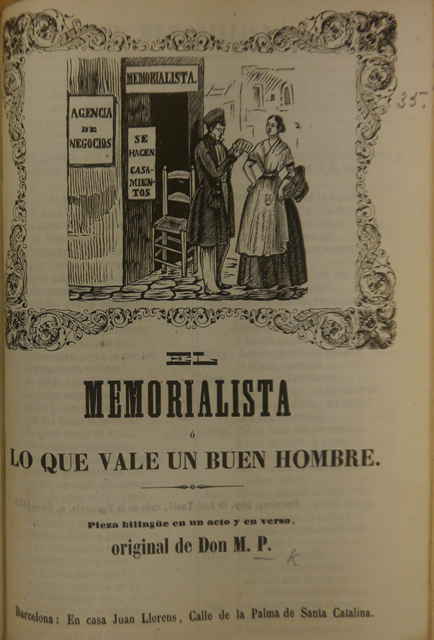 Gregori is a letter-writer and matchmaker, who matches Doña Clara and Don Eugenio; Pauleta is a maid. The characters mostly  speak in Catalan. Doña Clara is a fine lady, who speaks only Spanish; when addressing her, Don Eugenio speaks good Spanish and wins her hand; Gregori speaks to her in humorously bad Spanish. Although there is a class division by language, the atmosphere is more one of One Nation.

The conclusion is suitably bilingual: