Ukrainian printing in the Russian empire

As a result of the Union of Lublin in 1569, the Polish-Lithuanian Commonwealth was formed, and Kiev (Kyiv) with other Ukrainian territories were transferred to the Crown of the Kingdom of Poland. Lviv and its neighbouring territories had already been part of the Polish Crown from the 14th century. A series of uprisings, the most successful one being under the command of Bohdan Khmelnytsky, resulted in the creation of a Cossack state. Between 1654 and 1667 a series of treaties between the newly formed Cossack Hetmanate, the Russian Empire and  the Kingdom of Poland led to the agreement, according to which part of Ukraine on the left bank of the river Dnieper became part of the Russian Empire with the administrative status of ‘Hetmanate’. Although Lviv was also stormed and taken by the Khmelnytsky army, the city and the rest of the Western Ukrainian territories remained under Polish rule until the First Partition of Poland in 1772, when Lviv became the capital of the Kingdom of Galicia and Lodomeria within the Austrian empire.

The eastern territories of Ukraine became part of the Russian Empire and Ukrainian presses became subject to Russian Imperial censorship carried out by the Holy Synod, although it took some time to tighten restrictions.

The output of the Kiev Monastery of the Caves press apart from liturgical literature traditionally included sermons, poems, original works on philosophy and theology. In the mid-17th century, the press was managed by Innokentii Gizel’ (1620-1688), a prominent scholar and public figure. He was an author of a  Synopsis, the first popular history of the East Slavonic nations. 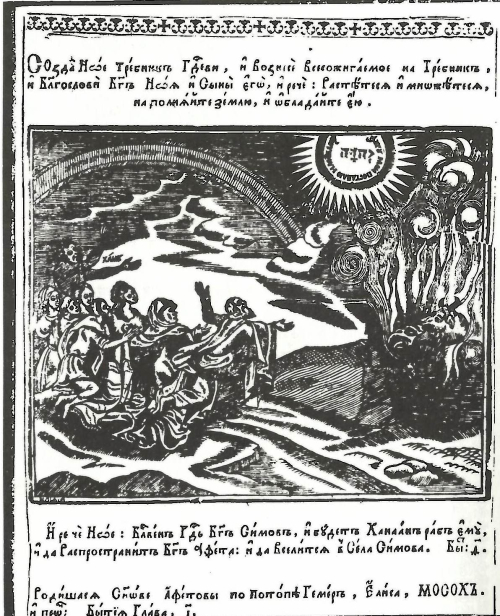 Another prominent clergyman, Lazar Baranovych,  initiated the opening of a new printing house in Novgorod-Siverskii (1674), which was later relocated to Chernihiv (1680). The British Library holds the 1691 Chernihiv edition of Runo oroshennoe by Dimitry of Rostov  (C.192.a.222) – a book of miracles performed by the icon of the Mother of God of Chernihiv (picture below). 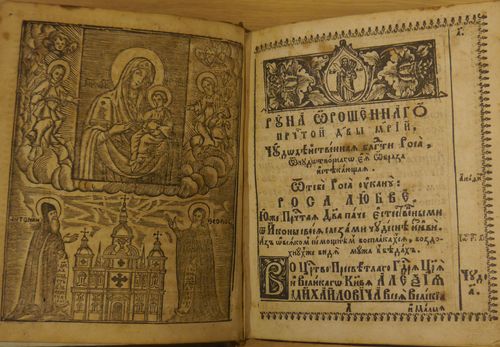 In Western Ukraine, the press at the Uniate Monastery in Pochaiv (in operation between 1730-1918), became the most productive. This press published books in Church Slavonic, Ukrainian, Russian, Greek, Latin and Polish, serving Orthodox Christians, Uniates, and Catholics. It specialised in liturgical books and literature related to the Holy icon of Mary, Mother of God of the Pochaiv Monastery. The British Library has several Pochaiv editions, including two of the 18th century. 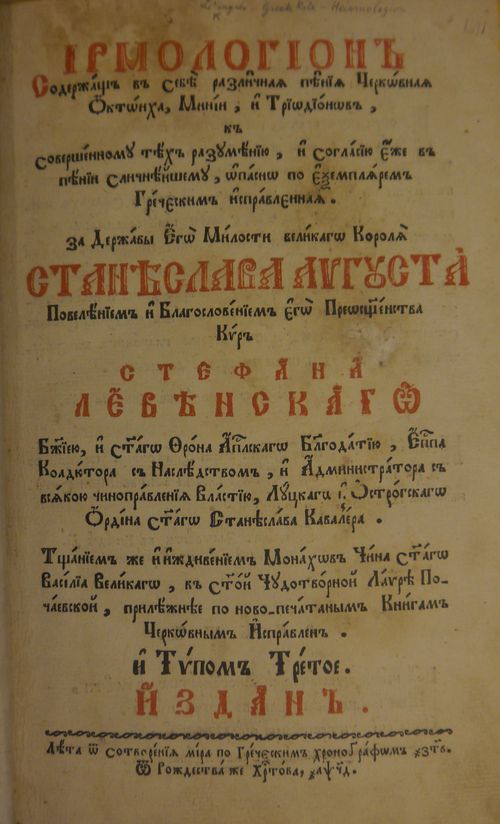 The Pochaiv Monastery press competed with the Lviv Brotherhood press and until the first Partition of Poland tried to transfer exclusive rights to print liturgical books from Lviv to Pochaiv. In 1772 the Lviv Brotherhood press won the court case, but it was no longer relevant, as Lviv became part of Austria, and Pochaiv remained in Poland. Ironically, the Partition of Poland helped to boost printing activities in Pochaiv, as before 1772 the Pochaiv Press could not publish certain liturgical books that the Lviv Press had exclusive rights for. As a result of the next Partition of Poland Pochaiv ended up in the Russian Empire, and of course, the press had difficulties with printing and distribution of Uniate editions, although it escaped such strict control as publishers in the territories of the Hetmanate. At the end of the 18th century, the press signed contracts with Old Believers to produce their books. The Russian officials soon found out about these contracts, and the press was almost closed. In 1830-31 the monks supported the Polish uprising, printing leaflets and pamphlets for the Poles. As a result, the monastery was transferred to the Orthodox Church, and printing which by the mid-19th century became the main source of income for the monastery, fell under control of the Orthodox Church.

Ukrainian culture became subject to enforced russification, so the formation of a modern Ukrainian literary language was delayed till the beginning of the 19th century. The first book in literary Ukrainian – Ivan Kotliarevskii’s mock-heroic version  of Virgil’s  Aeneid – was published in St Petersburg in 1798. Unfortunately, the British Library doesn’t hold the first edition of this work, but of course, numerous consequent editions are available.

A private St Petersburg publisher V. Plavil’shchikov produced some books in the Ukrainian language, including a Ukrainian Grammar (Grammatika malorossĭskago nari︠e︡chii︠a︡, 1818; 1332.e.5.(1.)) compiled by A. Pavlovskii. As many Ukrainians moved to the two Russian capitals, works of contemporary Ukrainian authors who later became classics of Ukrainian literature – Taras Shevchenko, Hryhorii Kvitka-Osnov’ianenko (1778-1843), Mykhaylo Maksymovych (1804-1873) – were first published in St Petersburg and Moscow. The first collection of works by the prominent Ukrainian public figure and writer Hryhorii Skovoroda  (1722-1794) appeared in St Petersburg in 1861. A short-lived Ukrainian journal Osnova (‘Basis’) was also published in St Petersburg.

The leading academic publisher in Ukraine was Kharkiv University Press (opened in 1805), but its production was primarily in Russian. The press issued several works on Ukrainian studies, original Ukrainian historical documents and some classical Ukrainian authors. Ukrainian modern journalism in Russian and Ukrainian also started in Kharkiv, where 12 periodical titles appeared between 1812 and 1848.

The Kiev Monastery of the Caves Press kept publishing liturgical and religious texts in Church Slavonic, but also catered for primary schools, seminaries and the general public, publishing calendars and serials. The Kiev-Mohyla Academy was shut by the Russian authorities in 1817, and Kyiv University was opened instead in 1834. A year later a university press was set up, which supplied textbooks for secondary and higher education institutions and published scholarly works by the university professors. Another state publishing house was established in Odessa in 1814. It specialised in literary almanacs and scholarly works. In 1839 the Odessa Society for History and Antiquities set up a press to publish their proceedings.

The liberal reforms of Tsar Alexander II made it possible for Ukrainians to publish in their language. The period of liberalisation was short-lived, and already in 1876 a decree that prohibited printing (including ‘lyrics’ for printed music) in Ukrainian was issued. The types of material that were exempted were historical documents, ethnographic sources and very selective fiction and poems, subject to censorship. Export of books from abroad was also banned. Some works by Ukrainian authors did not pass Imperial censorship and appeared abroad in uncensored editions; for example Shevchenko’s Kobzar’ was published in Prague in 1876 (11585.k.11; see picture below). 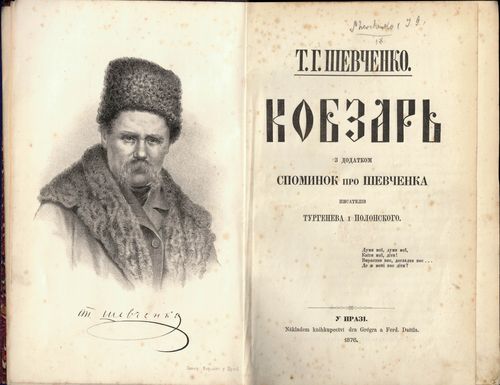 However, new private publishing houses became active at the end of the 19th century. These enterprises aimed to popularise literature among the lower classes, and therefore their books were produced cheaply with small print runs. See, for example, a collection of Ukrainian poetry and prose published in Kyiv in 1902. 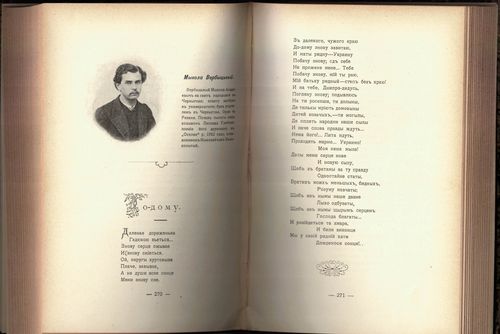 This page opening from vol. 1 of this three-volume collection (012265.i.7) shows a portrait of and lyrics by Mykola Verbytskyi, also a contributor to the journal Osnova.

Making books accessible for the wider public was the main goal of the publishing activities of various Ukrainian cultural organizations, such as societies for literacy in Kyiv and Kharkiv and the St Petersburg-based ‘Charity for publishing useful and cheap books’ (1898-1917). Apart from these organisations and other publishers who produced some Ukrainian books, in 1909, there were almost 20 Ukrainian publishing houses, and the overall number of Ukrainian books published between 1798 and 1916 is about 2,800 titles.

During the First World War production figures fell dramatically, but the printing industry quickly revived in the independent Ukraine  (1917-1921): about 80 titles appeared in 1917, compared with over a hundred in 1918.