‘All Horrid’ – but not all German

One of the display cases in our current Gothic Exhibition shows a collection of books whose fame today rests largely on their being mentioned in a novel by Jane Austen (much like Kotzebue’s Lovers’ Vows, discussed in an earlier post).  These are the ‘Horrid Novels’ which Isabella Thorpe recommends to her new friend Catherine Morland in Northanger Abbey as the two girls embark on a spree of gothic fiction reading.

The titles Isabella lists are:  ‘Castle of Wolfenbach, Clermont, Mysterious Warnings, Necromancer of the Black Forest, Midnight Bell, Orphan of the Rhine, and Horrid Mysteries.’ Unlike Ann Radcliffe’s The Mysteries of Udolpho and The Italian, which the girls also read, these titles had pretty much sunk into obscurity by the time Northanger Abbey was posthumously published, and early literary critics believed that they were inventions of Austen’s, parodying typical titles of the genre. Later researchers, however, established that, although Austen (or Isabella) made some minor errors in transcribing the titles, all seven books were genuine products of the time.

However, one thing less than genuine about some of them is a claim to be of German origin. Of the seven, only Clermont offers no hint of German-ness on its title page. The Orphan of the Rhine clearly indicates a German setting, but goes no further, while the other five are all billed as ‘a German story/tale’ or ‘From the German.’ However, this is only strictly true of two: The Necromancer is an adaptation of Karl Friedrich Kahlert’s Der Geisterbanner, and The Horrid Mysteries is a translation of Carl Grosse’s Der Genius. The Castle of Wolfenbach, The Mysterious Warning and The Midnight Bell are only ‘German stories’ insofar as their action is at least partially set in Germany – and this was probably not all that the authors meant to imply 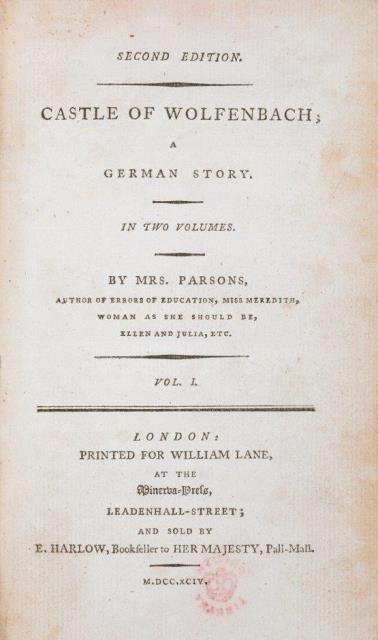 Claiming a false (and often foreign) origin for a work of gothic fiction was not uncommon. The first gothic novel, The Castle of Otranto, purported to be translated from an Italian manuscript (and the device of an invented source goes back further still). Indeed, the original German editions of both Der Geisterbanner and Der Genius claim to be based on other sources: Danish accounts collected by ‘Lorenz Flammenberg’ and the ‘papers of the Marquis C* von G**’ respectively. 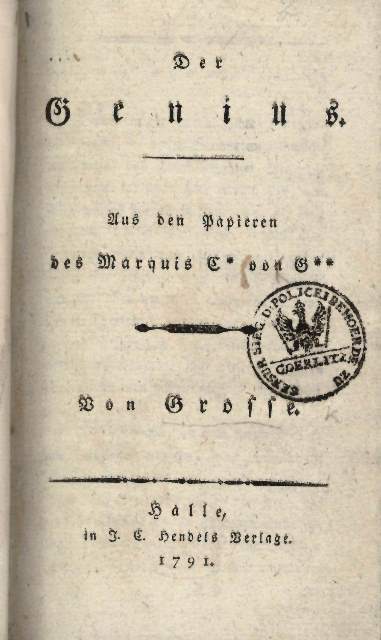 But why such a German flavour in a list of English gothic novels? After all, the gothic novel began with Walpole’s supposedly Italian tale, and Ann Radcliffe’s novels also tend towards Italian settings. Italy, France and other southern, Catholic countries of Europe were popular backdrops for British gothic writers since sinister, conspiratorial monks, nuns and priests could be introduced as villains, pandering to the prejudices of a Protestant audience. Yet a German source was clearly a sign of gothic credibility for readers like Catherine and Isabella.

One reason is that there was a definite German influence on English gothic fiction. This came partly via the works of the Sturm und Drang movement and partly from the translations of the more popular and less literary ‘Schauerromane’ (literally ‘shudder novels’), themselves often influenced by British gothic models. (The false translation traffic could go both ways, too: a number of German gothic novels were ascribed to Ann Radcliffe in the first years of the 19th century.)  This German influence was not always welcomed. In 1807 the writer Charles Maturin wrote of literary ‘horrors’ reaching British shores on a ‘plague-ship of German letters’. Two years earlier The Critical Review had rather sarcastically described Matthew Lewis’s The Bravo of Venice as a ‘Germanico-terrific Romance’. The Bravo was an adaptation of a real German work, Heinrich Zschokke’s Abällino, although the reviewer, ‘not acquainted with the original’, and obviously on his guard against false claims of translation from the German, casts doubt on this. Nonetheless he still has some harsh words for the ‘writers of the German school’ and their constant desire to shock. 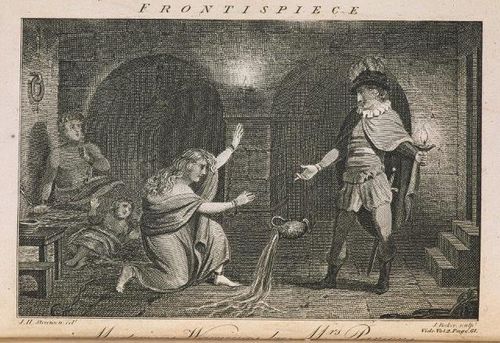 Apart from actual literary influences, the fact that ‘Gothic’ was still a synonym for ‘Germanic’ or Teutonic’ was no doubt another factor in the identification of Germany with things gothic, as was the Germans’ continued use of ‘gothic’ type. Interestingly, the Minerva Press, which published six of Austen’s ‘Horrid Novels’ and many other gothic works, printed its name in gothic type on its title pages – an early example of this kind of typeface being used as a kind of branding for the demonic and supernatural.

But perhaps another, although less easily demonstrable, explanation is that Germany simply lent itself more readily to gothic imagery in the popular imagination, with all the necessary forests, mountains and mediaeval buildings to furnish the scenery. Italy, despite its suspect Catholicism and its fair share of mountains and bandits, also carried connotations of fine art, classical civilisation and the Renaissance, all the antithesis of gothic. Perhaps even the idea of lowering North European skies as opposed to the sunshine of southern climes played a part: it’s harder to be gothic under a blue and sunny sky.

The continuing identification of German and gothic probably explains why Mary Shelley’s Victor Frankenstein, despite coming from rational, Protestant, French-speaking Geneva, has a German surname, and conducts his anatomical experiments while studying in Germany.  And it survives to this day, not least in the use of gothic lettering (and oddly superfluous umlauts) in the marketing of heavy metal and gothic rock bands.

The seven ‘Horrid Novels’ as displayed in the current British Library exhibition are:

Karl Friedrich Kahlert, The Necromancer: or The Tale of the Black Forest: founded on facts, translated from the German of Lawrence Flammenberg by Peter Teuthold. (London, 1794)  C.175.i.8.

Eleanor Sleath, The Orphan of the Rhine, a Romance (Dublin, 1802) Loan from University College Cork Library

Carl von Grosse Horrid Mysteries, a story from the German of the Marquis von Grosse, translated by P. Will (London, 1796) Loan from the Taylor Institution Library, Oxford