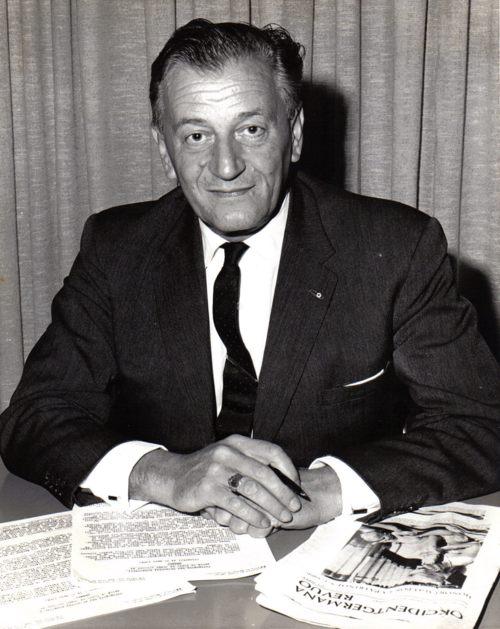 On 10 December 2014 Esperantists worldwide will be reflecting on the 60th anniversary of the Montevideo Resolution. This resolution in support of Esperanto was passed by the General Conference of UNESCO in Montevideo, Uruguay, on 10 December 1954, and authorised the Director-General “to follow current developments in the use of Esperanto in education, science and culture, and, to this end, to co-operate with the Universal Esperanto Association in matters concerning both organizations”. The Montevideo Resolution would not have been possible without enormous efforts by a great enthusiast for the international language, Ivo Lapenna (photo above with kind permission from the Lapenna Foundation).

The conference in Montevideo produced poems about its heroes and anti-heroes in Esperanto (by William Auld, Kalman Kalocsay, Reto Rosetti, Marjorie Boulton  and Geraldo Mattos). Photographs from the conference  and poems about it are to be found here. The “anti-hero of Montevideo” - Danish philologist Andreas Blinkenberg, who opposed the acceptance of the resolution -  lives on forever  in Esperanto poetry and spoken language (blinkenbergo).

Ivo Lapenna was born on 5 November 1909. A native of Split (then the part of the Austro-Hungarian Empire), he received a very good education and in 1933 gained his PhD in Law in Zagreb and later became a professor of International Law at Zagreb University. During the Second World War Lapenna worked for the Resistance Forces. In 1949 he emigrated from Yugoslavia to Britain via France, became a British citizen in 1962, and worked as a professor of law in London. He was also a qualified teacher of the cello. 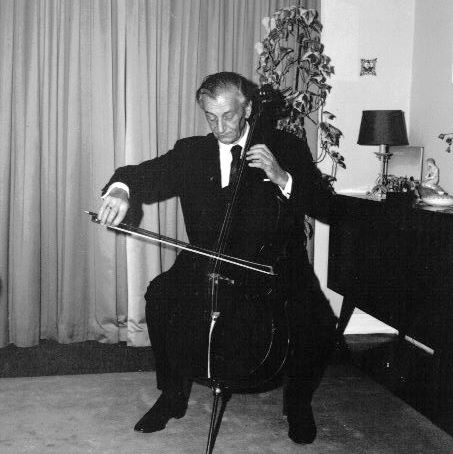 Ivo Lapenna playing cello (With kind permission from the Lapenna-Foundation)

The British Library holds books written and edited by Ivo Lapenna in various languages. The oldest of these was published in Croatian in Zagreb, then in Yugoslavia: Ujedinjene Nacije (‘The United Nations’; Zagreb, 1946; 8012.aa.23). Books about law in English followed in the 1960s: State and Law: Soviet and Yugoslav theory (London, 1964; 8184.d.47/1) and Soviet penal policy: A background book (London, 1968; X.208/864). By the time of writing the last book Ivo Lapenna held the title of “Reader in Soviet Law, London School of Economics and The School of Slavonic and East European Studies, University of London”.

Lapenna learned Esperanto as a teenager in 1928 and was an energetic and outspoken promoter of the language all his life. In 1955 he became General Secretary of the Universala Esperanto Asocio (UEA/World Esperanto Association) and between 1964 and 1974 served as its President. He was not re-elected during the 59th World Congress of Esperanto  in Hamburg in 1974, which created a lot of friction among Esperantists. Lapenna himself called the events in Hamburg “the communist putsch”. His colourful and complicated personality continues to provoke discussions in the Esperanto world up to the present day. Although Esperanto was planned by Zamenhof as a “neutral language” for all, the World Esperanto Association was functioning in the real world, and during the Cold War tensions among various national Esperanto associations sometimes rose very high. Even the article about Ivo Lapenna in the Esperanto-language Wikipedia (Vikipedio)  gives a warning about the “non-neutrality of the article”.

There are, however, a few things that all Esperantists do agree about Lapenna: he was an outstanding orator and the first author of a book about the art of oratory in Esperanto. His Retoriko (‘Oratory’; Paris, 1950) was republished several times (the British Library holds the second and third editions: Rotterdam, 1958; X5/5240 and Rotterdam, 1971; YF.2011.a.24046). 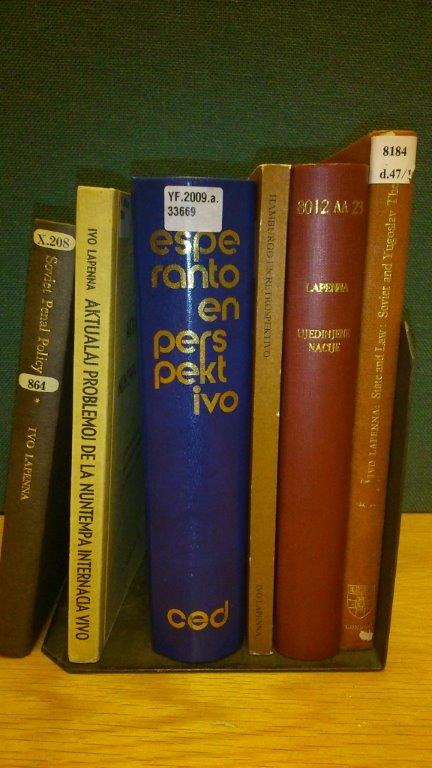 Most of the books written and compiled by Lapenna, among them the monumental encyclopedic work (written in collaboration with Ulrich Lins and Tazio Carlevaro) Esperanto en perspektivo: faktoj kaj analizoj pri la internacia lingvo (‘Esperanto in Perspective: Facts and Analyses about the International Language’; London-Rotterdam, 1974;) are in Esperanto and about Esperanto. The British Library Esperanto Collections hold the following books:

Some of his books were translated into other languages. The whole bibliography of the original works and their translations is available in: Concise Encyclopedia of the Original Literature of Esperanto  by Geoffrey Sutton (New York, 2008; YC.2008.a.12495).

After his retirement Ivo Lapenna moved to Denmark. Even the date of his death – 15 December 1987 – the year of the 100th anniversary of La Unua Libro  – is linked to the love of his life, Esperanto: Zamenhof was born on 15 December. Books and pamphlets in his memory appeared soon after his death: Memore al Ivo lapenna (‘Ivo Lapenna in Memoriam’; Copenhagen, 1988; YF.2010.a.9052);  Eseoj memore al Ivo Lapenna (Essays in memory of Ivo Lapenna; Copenhagen, 2001; awaiting shelfmark). In 1984 the Lapenna Foundation was created in Copenhagen, aiming to keep alive the memory of Ivo Lapenna’s outstanding life, to promote the international language Esperanto, and to contribute to respect for human rights worldwide.