From Sanatoria to Skis: Winter Holidays in Switzerland

At this time of year many people are dreaming of – perhaps even planning – a skiing holiday, and Switzerland is a popular destination.  But in the 19th century the idea of holidaying in the snow would have been considered very strange. Back then, if wealthy foreigners spent  the winter in Switzerland, it would almost certainly be because they were ill: the clean, cold, fresh mountain air of the Swiss alps was considered effective in curing various illnesses, especially lung diseases such as tuberculosis. 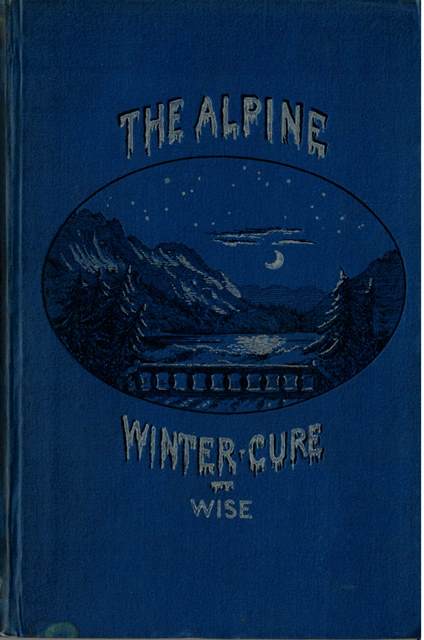 The world of the Swiss sanatorium where these patients spent months or even years was most famously captured in Thomas Mann’s novel Der Zauberberg, set in Davos in the years before the First World War. But by the time Mann was writing – and even during the period when his novel takes place – Davos and other Swiss mountain resorts were just as well-known and popular for their winter sports as for their curative properties.

How did this come about? A recent newspaper article about the Swiss resort of St Moritz described how in 1864 local hotelier Johannes Badrutt lured some English tourists to stay there in winter with an ‘enjoy your holiday or get your money back’ offer. His gamble paid off, and St Moritz soon became a winter playground for the rich of Europe who, when they tired of indoor games, started to pursue outdoor ones, including skiing and tobogganing. Suddenly the snow-covered alps became a world full of sporting possibility. 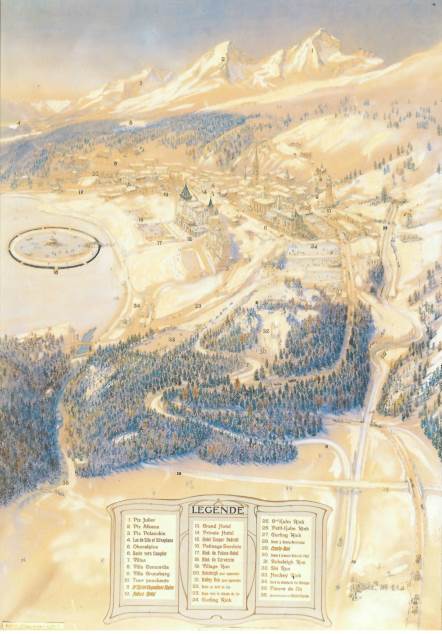 Badrutt and his guests may have been pioneers in St Moritz but they were part of a wider trend at the time. Skiing purely as a sport started in the mid-19th century in Norway, where it already had a long tradition as a practical methods of travelling in snow-bound landscapes. It soon spread to alpine regions elsewhere in Europe, particularly Switzerland (and further afield: one of the earliest ski clubs was founded by Norwegian immigrants in Australia). Skiing in the Alps led to changes in the cross-country skiing familiar in Norway, as the steep slopes encouraged the development of downhill skiing. 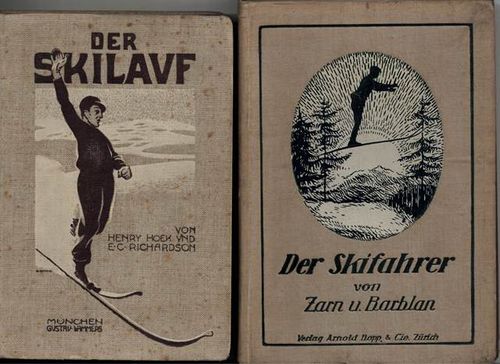 Alongside the sport itself a whole literature of skiing grew up. The British Library holds many such works both in English and other languages (though sadly many others were among the books destroyed by bombing in the Second World War). There are guides to the art of skiing, describing equipment and techniques; accounts of the adventures and excursions of skiing pioneers; guidebooks to the best locations for those wanting to follow in their ski-tracks; and histories of the various ski clubs and skiing centres. Skiing even found its way into fiction – although not as memorably as the sanatorium of Mann’s Zauberberg – and by the 1930s works such as Skiløperen by the Norwergian Mikkjel Fønhus (Oslo, 1936; 012584.c.23.) or Schi-Novelle by the German Ludwig Barthel (Jena, 1938; F10/0893) were available for après-ski (or armchair skier) reading. However, some of the most unexpected accounts of early 20th-century accounts of Swiss skiing turn up in a magazine for wounded British Prisoners of War interned in Switzerland to await repatriation during the First World War. Arnold Lunn, a British skiing pioneer and author of many books on the sport, worked as a volunteer among the internees at Mürren in the Bernese Oberland and led a number of skiing excursions to occupy time and to boost morale and physical fitness. Although the most severely wounded men could not take part, for others, learning to ski and accompanying Lunn to the slopes must have been a form of therapy both physical and mental, a meeting of the two concepts of Switzerland as a place for winter healing and winter sports.