On 28 September 1922, a German steamer called the Oberbürgermeister Haken left Petrograd for Germany carrying a cargo of prominent Russian philosophers, scientists and other members of the intelligentsia. Six weeks later a second followed. Nearly two hundred intellectuals were expelled on these ‘philosophers’ ships’ taking what books and possessions they could carry. It was, as numerous historians recall, the culmination of one of Lenin’s last major campaigns before the series of strokes which would marginalise him politically and then, in 1924, kill him. 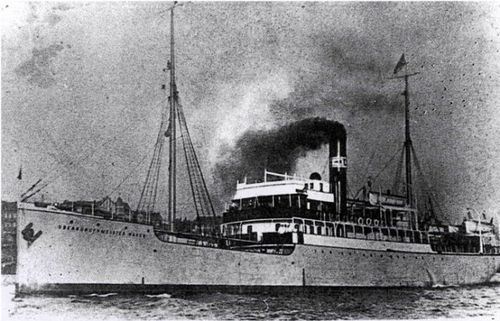 The most famous figure to be exiled in this way was the Christian-existentialist philosopher Nikolai Berdyaev (Berdiaev). Once a Marxist and briefly a member of the Union of Liberation (Soiuz Osvobozhdeniia), Berdyaev had nevertheless become bitterly opposed to the Bolsheviks, writing that:

The Russian revolution has turned to be a consistent application of Russian nihilism, atheism, and materialism – a vast experiment based on the denial of all absolute spiritual elements in personal and social life… (‘Kto vinovat?’ (Who is to be blame?) in Russkaia svoboda, N 18, 1917. Pp. 3-9 – British Library P.P.4842.dca; translation  from Donald Alexander Lowrie, Rebellious Prophet. A Life of Nicolai Berdyaev, p. 146) Nikolai Berdyaev (eproduced in  the English translation of his ‘essay in autobiography’, Dream and Reality (London, 1950) 010790.i.84.

Berdyaev’s public criticism of the regime had aroused the attention of the secret police, which included him in a list of 186 ‘anti-Soviet intellectuals’. He was arrested on the night of the 16th and, after a week in prison, released pending his deportation. Though he was not treated cruelly during this time, he was hurt badly by the idea of leaving for Germany.

In 1921 Russia’s civil war had ended, and although the Red Army had been victorious the Bolsheviks remained poised for a further outbreak of war. Dissident intellectuals were seen as a potential threat to be exploited by the enemies of the Bolsheviks. In this light Trotsky argued in favour of the expulsion in an interview with the American journalist Louise Bryant (published in Izvestiia, 30 August, 1922, p.1 ), comparing the case to that of the Socialist Revolutionary Party:

Recently you witnessed the trial of the [Socialist Revolutionaries], who, during the Civil War were the agents of foreign governments fighting against us. The court judged them as warranting the death penalty. Your press, for the most part, conducted a despairing campaign against our cruelty. Had we got the idea straight after October to the send the SR gentlemen abroad we could have saved ourselves from being called cruel. (Translation from Lesley Chamberlain, The Philosophy Steamer: Lenin and the Exile of the Intelligentsia, p. 121).

While the Bolsheviks sought to rationalize and Europeanize Russian society,  many of the expelled intellectuals were idealists and religious adherents wedded to a more traditional Russia. For the Bolsheviks, the spirituality of the old intellectual classes was fundamentally opposed to the rationality of the new workers’ state. Berdyaev in particular was critical of their zealotry for modernity, attacking the way that socialists' purges of the 1930s

… take over from bourgeois capitalist society its materialism, its atheism, its cheap prophets, its hostility against the spirit and all spiritual life, its restless striving for success and amusement, its personal selfishness, its incapacity for interior recollection. (Novoe srednevekov’e:  Razmyshlenie o sud’be Rossii i Evropy. (Berlin, 1924;  8094.bbb.42) English translation from: Lewis Owens, ‘Metacommunism: Kazanzakis, Berdyaev and “The New Middle Age”’, Slavic and East European Journal vol. 45, no. 3 , p. 436)

As such, he looked forward to the start of a ‘new middle age’ of spiritual rebirth. After his deportation, Berdyaev lived in Berlin, where he and other exiles founded the Russian Scientific Institute, of which he served as the Dean, as well as the Religious-Philosophical Academy, before moving to France. He died in 1948 without seeing his country again. Had he stayed in Stalin’s Russia, it is unlikely that he would have survived th