‘Say “Dracula” and you smile. Say “Nosferatu” and you’ve eaten a lemon’

Introducing the Germanness of all things Gothic in an earlier post, Susan Reed draws the borderline between the South – ‘fine art, classical civilisation and the Renaissance’ - and the gothic North, concluding that ‘it’s harder to be gothic under a blue and sunny sky.’ This separation has a lot to do with meteorological, agricultural and gastronomical particularities – the vines simply stop growing by the time you get to the North.

What this means for Northern life and its artistic and cultural responses is something quite different to the restrained pietism and often ideal imagined worlds of classicism. As Jonathan Meades has it, in his 2008 documentary Magnetic North, ‘The North is the unpromised land of darkness, the gothic in all its forms, the thrilling grimness, exhilarating harshness, inky canals, fog, glistening cobbles – of buildings which respond to vast lands and skies with spires.’ One needs only to compare, for instance, the Isenheim Altarpiece (Matthias Grünewald 1512-1516) to a Raphael alternative – take Crucifixion with the Virgin, Saints and Angels. The German representation of the crucifixion is plague-ridden, screaming pain, whereas the Italian version shows an almost peaceful death. The hostile conditions of the Northern world are, therefore, tangibly transmitted into its art forms, which seek to escape the same world through a fantastical imagination always already informed by everyday horror.

The Gothic Exhibition is tinged with, if not haunted by, this hostile northernness (and its particular German variety). Once you navigate around the black spaces of the exhibition, brushing past black diaphanous dividing curtains, you reach the Dracula room, separated off in a dark corner, to be greeted by the black and white of a film projection – F.W. Murnau’s Nosferatu: Eine Symphonie des Grauens (1922). Murnau’s film is self-consciously based on Stoker’s Dracula and yet critics argue that, had Murnau not admitted his source, the works differ so much that it might have been easy to forget the connection (Mayne). Anders Larsson – firmly in the pro-Nosferatu camp – understands Stoker’s Dracula as ‘sophisticated, culturally aware, aristocratic, and seductive’ even engaging in ‘banter, seduction, small talk.’ In other words, Dracula is decidedly a human type, an intelligent, attractive one at that. 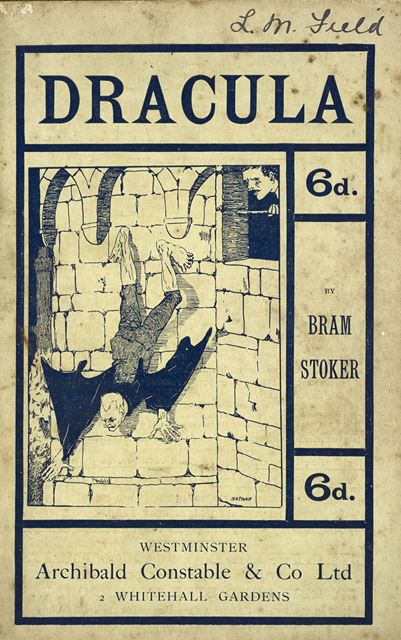 A quick glance at the list of actors in the English-speaking role only confirms this Anglo-American conception of the monster: Bela Lugosi, Christopher Lee, Gary Oldman, and Luke Evans (who is in this year’s Dracula Untold). Nosferatu, or Count Orlok, as he is known, is rather ‘repulsive in every way’ and certainly ‘not a sexy vampire’. Bald-headed, grotesquely exaggerated facial features, ever-lengthening fingernails, Orlok is (deliberately) rodent-like, far from conventional notions of beauty, yet perhaps far closer than Dracula to a shared concept of monstrosity. The difference is best articulated in the words of the film critic Roger Ebert: ‘Say “Dracula” and you smile. Say “Nosferatu” and you've eaten a lemon.’ 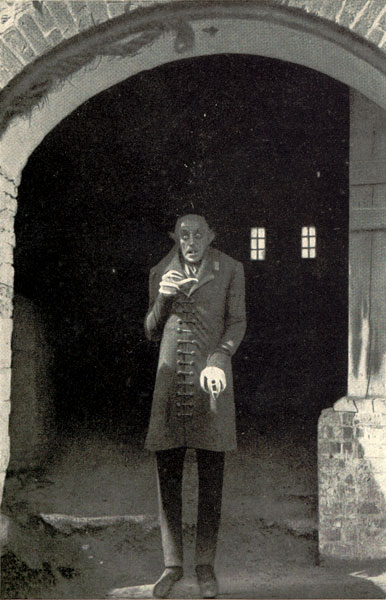 Countering the critical idea that Nosferatu is somehow Dracula avant la lettre, Saviour Catania attempts to show the already extant German romanticism and mysticism in Stoker’s work itself. The story is then Germanized both before and after the fact. Stoker has the vampire say, ‘I love the dark and shadow’, which Catania sees as a German romantic obsession with the ‘shadowy self, fragmenting into a more insubstantial parallel realm.’ If the story is indeed a play of dark and shadow, we begin to see the reasons for Nosferatu’s appeal, as film itself, in its earliest, silent, monochromatic form, is already a vampyric medium – a play of light and dark. In the scratchy, sketchy imprint of the remaining copies of Murnau’s film, the modern viewer is disturbed by default. Blackness engulfs the frame. Orlok becomes shadow, always hiding in them, rarely appearing in close-up, and Catania understands Murnau’s achievement as precisely the ‘ingenious ways of incarnating in visual images Stoker’s verbal descriptions of what is visible but incorporeal.’

Like the gruesome artworks of Grünewald, Bosch and northern Gothic in general, Nosferatu is inventive, fantastical and self-reflexive; it draws attention to its artifice, showing that both the horror and its representations are all the work of man, confining the horror to the ever-alienating and deadly potential of our world. We cannot escape. Shadow encroaches onto the edges of the film and re-asserts our uncertainty and the very real fears of the viewers’ worlds.

Florence Stoker, the wife of the author, immediately sought legal action after the appearance of Murnau’s film. A long drawn-out battle eventually saw the court order the destruction of all copies of the film. Living up to its name, Nosferatu (Romanian for ‘un-dead’), could not be destroyed and the film re-surfaced two years later. The film continues to haunt the legacy of Dracula as well as the Dracula room in the Gothic exhibition. We may even read the strong presence of (black and white) film in the exhibition, with its flickering play of projected light (and dark), as a nod to the ‘death-mask’ (André Bazin, in Catania) that is cinema itself, and the intangible shadowiness of our underlying horrors. However we understand the Dracula story and in whichever German, English, literary, or filmic mode, the vampire is here to stay, forever haunting the imagination. We can join Jonathon Meades in concluding, the Gothic ‘never went away, it never will.’