Before the year is out I thought I would reflect on some of the most notable Russian artistic publications held by the British Library that were published a century ago in 1914. Tango with Cows (Tango s korovami) has always been one of the most popular Futurist works with art students. They are initially fascinated by the brightly coloured original Russian flowered wallpaper from 1914 on which are printed poems by the Russian Futurist Vasily Kamensky.  This artist’s book with a corner deliberately cut off and held together by staples reflects the Russian Futurists’ desire to produce anti-aesthetic books made of rough materials such as newsprint, wrapping paper or even gingerbread, reproduced cheaply for an audience of artists, writers and students. 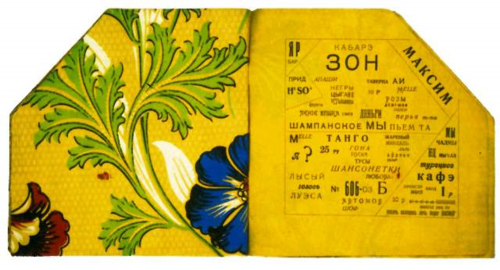 The collection is sub-titled “ferroconcrete poems” (not to be confused with the later Concrete Poetry movement).  Each poem is presented on a single page where the words are literally poured into segments. As there is no syntactic structure it would be difficult to read the poem in a linear way. Instead the text – mostly nouns and a few verbs – is organized by word association and visual links encouraging the reader to look at it as if it were a painting. In the poem Cabaret (see above) the reader’s eye is attracted to people, music, food, drink, sights and sounds in Maksim’s cabaret by the various types and sizes of font used for that person etc. For example the word MELLE (Mademoiselle) appears both in the upper and lower segments as if dressed in a different typeface. The text also includes the chemical formula H2SO4 (perhaps to indicate a danger area in a top left segment), and humour, as at the bottom right where it says entrance is 1 rouble and exit is 1000 roubles. The typographical innovations of this book show the influence of both Italian Futurist poetry and French calligrammes as for example the poem Vasya Kamensky’s aeroplane flight in Warsaw where the poem forms a visual representation of a plane taking off.

Misticheskie obrazy voiny (Mystical Images of War; Moscow, 1914; C.114.n.24) by Natalya Goncharova has been much discussed this year in the context of World War 1 centenary events. Two of the 14 lithographs in this collection, Angels and Aeroplanes and A Common Grave, were included in the British Library’s exhibition Enduring War. This collection of lithographs is Goncharova’s response to the First World War and combines images based on Russian icons and popular prints (lubki) with aspects of modern life. This combination of the realistic detail with the metaphysical often calls to mind the works of the English artist Stanley Spencer. This is particularly so in Angels and aeroplanes which demonstrates an ironic approach to the war where the pilots and planes appear vulnerable in the hands of the angels. Unlike the Italian Futurists who glorified war, Goncharova expresses a more pacifist attitude to war here.

The Library also holds Russian First World War posters designed by the well-known artist Dmitry Moor (real name: Orlov). Moor took his pseudonym from the surname of three characters in Schiller’s drama The Robbers – no doubt this choice reflected his liking for biting satire and caricature in which he excelled in his posters. 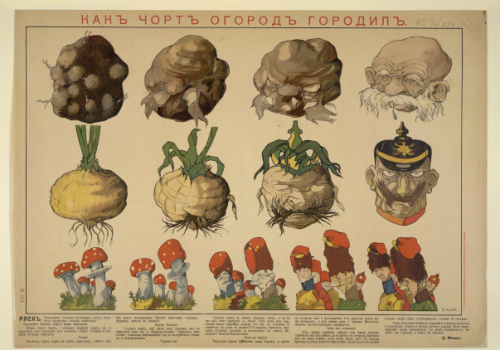 Finally I’d like to mention a number of Russian First World War posters published in 1914 with captions by Vladimir Mayakovsky  held by the British Library. 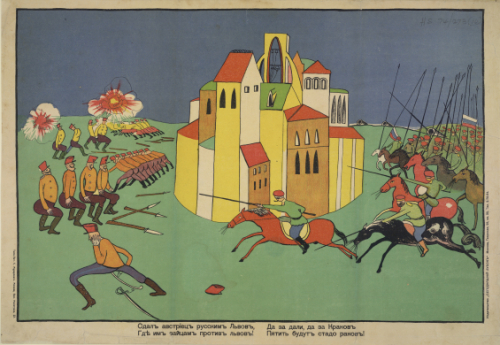 The Russian Futurists at first supported the war and created patriotic posters for the government when Russia was doing well at the beginning of the war. The project ‘Today’s Lubok’ employed Mayakovsky, Malevich and Lentulov in a scheme to make propaganda posters of the war in colourful lubok or folk styles for mass distribution. Although Mayakovsky is principally known as a poet, he originally studied at art school in Moscow and also designed posters as well as writing captions for posters designed by Malevich and Lentulov. You can find more examples on the Library’s ‘Images Online’ pages. For more information and images of those designed by Malevich with text by Mayakovsky see my earlier post.