The Two Sieges of Paris: more caricatures from the Franco-Prussian War and the Commune

In an earlier earlier blog post I wrote about Napoleon III’s defeat at the hands of the Prussians in the Franco-Prussian War of 1870-1871 as illustrated in our last collection of caricatures (Cup. 648.b.8)  to be conserved to ensure that it is fit for use.  Following the Emperor’s abdication, a provisional Government of National Defence was proclaimed on 4 September 1870, with General Trochu, the military governor of Paris, at its head. 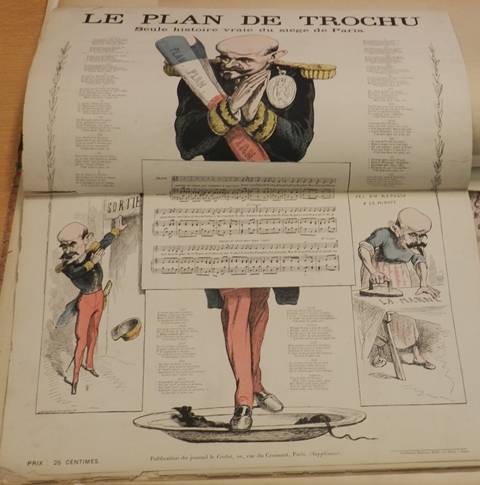 This satirical print, Trochu’s plan: the only true story of the Siege of Paris, pokes fun at the General’s plan for defending the city from the besieging German troops.  The main image shows Trochu clutching his plan and standing on a dish with scuttling rats: as the lyrics in the accompanying song put it, Parisians were reduced to eating ‘rats, mares and mules, and dogs in place of bread’. The smaller image on the left refers to the unsuccessful sorties (the French word means ‘exit’ as well as ‘military sorties’ or breakouts) that Trochu made under pressure of public opinion. The caricature on the right alludes, in an untranslatable pun (‘repasser’ means both to ‘to iron’ and ‘to go back across’), to the sortie of 30 November-2 December when Trochu’s troops crossed the Marne to meet the Prussians, but then had to retreat back across the river.  The lyrics, composed cumulatively over time starting with the first verse in early autumn through to the following spring by a group of ‘well-known journalists’, sarcastically attribute every disaster – military defeats, starvation, bombardments and the eventual capitulation of Paris on 28 January 1871 – to deliberate manifestations of Trochu’s plan to be welcomed.

Trochu resigned on 22 January 1871. The new government, elected on 8 February and led by Adolphe Thiers, who had been a minister under King Louis Philippe, now tried to seize the guns that had been used to defend Paris in an attempt to disarm the city. Parisians fought off the government troops and kept their artillery, but this bungled attempt provoked the very rebellion it had been designed to forestall. A Commune (municipal council) to run the city was elected on 28 March, with the red flag as its symbol. The government retreated to Versailles. Its army, defeated by the Prussians, now turned its guns on its own people and encircled Paris. Government troops entered the city in the last week of May in what became known as the ‘semaine sanglante’ (‘bloody week’). 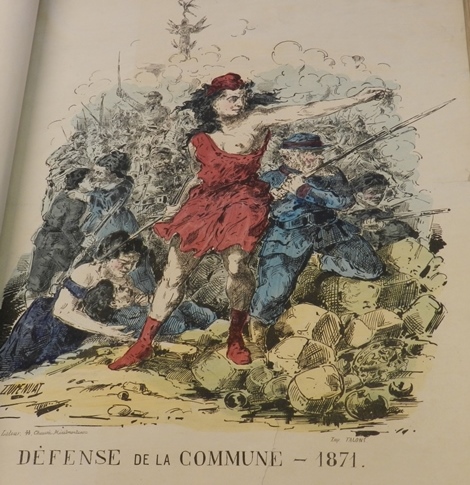 This pro-Commune lithograph shows Parisians fighting on the barricades led by a woman dressed in red (the colour of the Commune), in a pose reminiscent of Delacroix’s Liberty Leading the People. By contrast, this anti-Commune print depicts the defeated Commune as a dying ‘pétroleuse’, a scandalously bare-breasted dishevelled harpy, carrying a container of petroleum and brandishing a burning firebrand, with a petrol bomb tucked into the skimpy folds of her dress. She is contrasted with the upstanding female personification of the victorious army. The small vignettes all around the print show burnt-out landmark buildings set alight in the face of the advancing government troops. The incendiaries were alleged to be female revolutionaries dubbed ‘pétroleuses’.  The two smaller images show respectively the Commune’s shooting of Generals Lecomte and Thomas, and the execution of the archbishop of Paris, Monseigneur Darboy, depicted raising his arms in a pose recalling the central figure in Goya’s Third of May, in the prison of La Roquette. The archbishop, who was courageous and dignified in the face of the execution squad, became an instant and enduring martyr for the Catholic right. The government’s repression of the Commune was pitiless: an estimated 25,000 communards were killed, a further 12,500 tried and over 4,000 were deported to New Caledonia in the Pacific. Others fled into exile including the caricaturists Faustin and Pilotell, represented in our collection, who forged new careers for themselves in Britain. This satirical lithograph shows President Thiers as a monarchical republican crushing the Commune, symbolised by its red flag, while the moderate Orleanist monarchists, represented by the sons and grandsons of King Louis Philippe, trample on the flag while doing obeisance to him. The legitimist Comte de Chambord, grandson of the Bourbon Charles X, hovers above flying the white flag of the Bourbon monarchy: his rejection of the tricolour as the new national flag scuppered his chances of becoming king and restoring the monarchy.

Help us raise funds to conserve this collection of caricatures from the Franco-Prussian War and the Commune. By making a contribution, you support our conservators’ efforts to clean, repair, and reback these precious volumes, making them accessible to users both now and in the future. Please make a donation at http://support.bl.uk/page/care-for-collections today; every amount makes a difference .