Afterthoughts on the Spanish Gothic

Despite the success, in their time, of works such as Agustín Pérez Zaragoza y Godínez’s Galería fúnebre de espectros y cabezas ensangrentadas (1831), the Gothic presence in the canon of 19th-century Spanish literature is not great. José Cadalsoʼs Noches lúgubres (British Library 1480.a.27), published in El Correo de Madrid (o de los ciegos) in 1789-90 must have been the first and most successful Spanish imitation of Edward Young’s works, but they remained, in their time, an isolated phenomenon. José María Blanco White’s Vargas: a Tale of Spain (1822; N.98), which could have been an apt example for our purposes, was written in English and published in London, and did not circulate much in Spain. Later in the century we could cite José de Espronceda’s longer poems, El estudiante de Salamanca (1837- ; published in book form in 1840) and El diablo mundo (1841; 11451.de.33), or pick some of the Leyendas that Gustavo Adolfo Bécquer published from 1858 onwards in magazines such as El Contemporáneo. The names and titles are conspicuous enough, but none of these canonical texts seems to match the rich concept of the Gothic imagination that the Terror and Wonder exhibition has illustrated.

Yet by the mid-19th century, stormy nights, deserted streets, dark and lonely churches, convents and palaces had become commonplace in Spanish literature; more specifically, they had become a must for the opening scenes of any fictional text that intended to reach and seduce a wide audience. Judging by the number of texts that open on these notes it might seem that, despite the apparent lack of a local Gothic tradition, certain sections of the ever-growing reading public had fallen under the spell of terror and wonder. Indeed, many contemporary critics saw the new readers as avid consumers of any kind of cheap thrills that the publishing industry would produce. Although no single phenomenon can explain by itself the spread of Gothic imagery in Spain, the so-called popular novel did play an important part in bringing it closer to the historical present. Eugène Sueʼs novels Les Mystères de Paris and Le Juif errant were widely read in Spain during the 1840s and 1850s, and his poetics of urban phantasmagoria were quickly appropriated and utilised by, among others, Wenceslao Ayguals de Izco. Ayguals, a prolific writer and literary entrepreneur, took Sue’s texts as a model for his own Historias-Novelas, which dealt with what he considered to be the main (political, moral, religious) concerns of his Spanish contemporaries.

Though Ayguals used the label Historias-Novelas to advertise many of his works, it is rarely as accurate as in El Tigre del Maestrazgo, o De grumete a general (1846), a sort of novelized biography of the Carlist general Ramón Cabrera (1806- 1877), who had nearly led his troops to victory in some campaigns of the First Carlist War (1833-1840). The second edition of the novel (12490.g.7)  was published in 1849, in the wake of the Second Carlist War (1847-1849) that led Cabrera into exile, first in Marseille, then in Wentworth, near London. 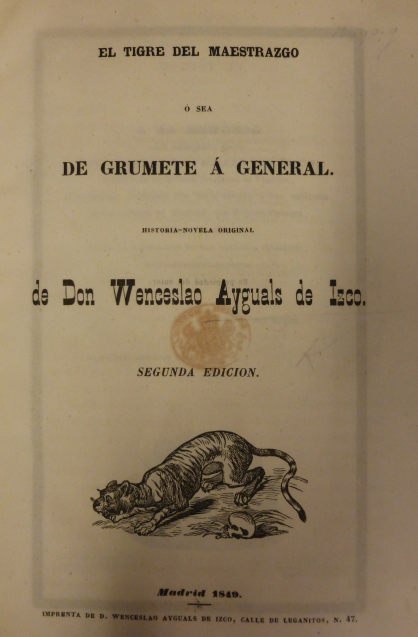 The first pages of the book set the scene. The novel is dedicated to the memory of Ayguals’ brother, Joaquín, who fought in the First Carlist War on the Liberal side, and was killed by “the ferocious Cabrera” in 1835 alongside 62 other Liberal soldiers.

The second hall the readers will have to cross before they enter the realm of fiction is an emphatic funeral poem that the author wrote when a cenotaph was erected in his home town to honour the memory of the 63 Liberal soldiers:

A prologue follows where the author explains his reasons for writing the novel and paints a first portrait of Cabrera – known everywhere by his nom de guerre, el Tigre del Maestrazgo – as a daredevil tactician and a “ruthless terrorist, arsonist and murderer” driven not by his ideals or his sense of strategy but by sheer thirst for blood.

And then the novel itself starts, with the description of a stormy winter night in Tortosa, Cabrera’s home town: the howling wind, lightning and thunder, fire and flood all suggest that something terrible is about to happen. “Sighs of agony and doleful cries for help resounded everywhere”; and in the house of a poor and honest fisherman, a heavily pregnant woman feels as though she is bearing “a beast that tears my insides out”. She is about to give birth to Ramón Cabrera, el Tigre del Maestrazgo.

The topics and devices of such an opening scene served the author’s aesthetic and ideological purposes well: the troubles and catastrophes that attend Cabrera’s birth in December 1806 – Ayguals evokes the flooding of Tortosa in previous years, but no such event seems to have occurred in 1806 – are a sign of what his life and deeds will mean to his contemporaries. Within the narrative structure of the novel, this scene acts as a sort of overture, but in the act of reading, it seems to serve the same purpose as the dimming of lights at the theatre as the curtain goes up and the spectators enter the dark realm of fiction.

Gothic imagery in the rest of the novel seems restricted to the description of the clergy and the religious institutions that supported the Carlist movement. Ayguals identifies the binary opposition of Liberals and Carlists with the binary opposition of Progress and Fanaticism, which soon becomes one of the driving forces of his novel (the other being melodrama). Despite this narrative turn, reading El Tigre del Maestrazgo we get the impression that the engravers who illustrated it were keen to return to Gothic imagery whenever the occasion arose, as the following image (from vol. I, p. 146) shows: 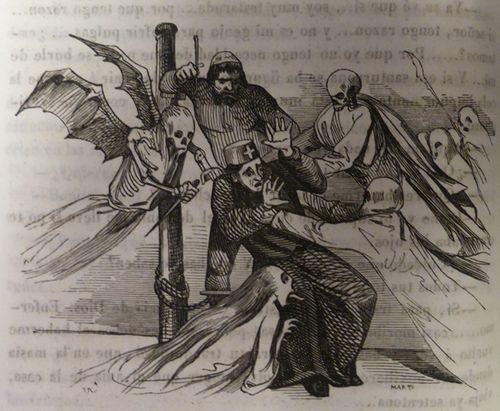 Although the face does not really resemble other portraits of his that we find throughout the novel, this is supposed to be Cabrera, on the scaffold, about to be executed, and haunted by the ghosts of the people he had murdered. The description of this nightmare takes barely three lines in the text, yet the image it suggested was too fascinating to let it go.

Thank you for the wonderful post. Ayguals was also an interesting abolitionist writer at mid-century. One note: it has recently been argued that Blanco White was not the author of Vargas. Rather, the author was the Briton Alexander Dallas. See Fernando Durán López' article on "Limpiando un borrón en la bibliografíá de José María Blanco White," Cuadernos de Ilustración y Romanticismo, no. 19 (2013).