Michel Eyquem de Montaigne was born on 28th February 1533, and by the time of his death 59 years later had enriched French literature with a new genre – the essay. Brought up by his father to speak Latin as his first language, he rapidly lost his mastery of it when at the age of six he was despatched to the Collège de Guyenne  in Bordeaux so that, by the time that he left, he claimed that he knew less than when he arrived. However, throughout his life he retained a love and reverence for classical authors including Cicero, Plutarch and Seneca, which shaped not only his philosophy but his chosen form of literary expression, and ultimately made him one of the most beloved and accessible authors to readers outside his native land. 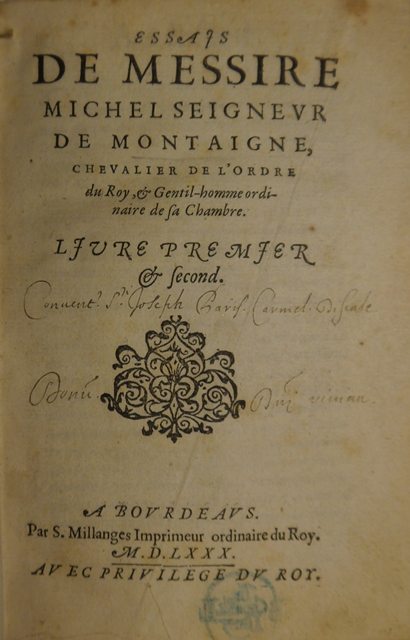 The title-page of the first edition of Montaigne’s Essais (Paris, 1580) British Library G.2344.

Witty and aphoristic, the collection of essays, first published in 1580, comprises three books divided into one hundred and seven chapters on topics ranging from coaches, cruelty and cannibalism to thumbs and smells. Their discursive nature reveals many details about their author and his milieu, drawn from his experiences as a Gascon landowner and official who rose to become mayor of Bordeaux, his travels through Italy, Germany and Switzerland, the turbulent years of the Wars of Religion, and his family life, in which we catch glimpses of his masterful mother, his wife Françoise, and his only surviving child Léonor – a household of women from which, at times, he would retreat to the peace and solitude of his tower, fitted with curving shelves to accommodate his library, to enjoy the company of his cat – another female – who has achieved immortality through his observations of her at play. 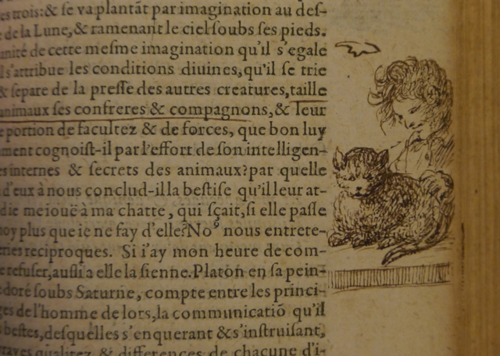 Marginal picture of a man with a cat, drawn by Pieter van Veen in his copy of Montaigne’s Essais (Paris, 1602) British Library C.28.g.7.

The Essais rapidly achieved wide popularity, and not only in France. They ran into five editions in eight years, and in 1603 an English translation appeared, the work of John Florio. Florio, born in 1533 as the son of an Italian father and an English mother, had left England as a small child when the accession of Mary Tudor to the throne had sent his family into exile, and as they wandered around Europe he acquired a knowledge of languages which equipped him to earn his living on returning to England as a teacher of French and Italian and the author of an English-Italian dictionary (London, 1578; 627.d.36).

It was at the behest of his patroness, the Countess of Bedford, that he set about translating the Essais, assisted by a multitude of collaborators who, through the Countess’s offices, tracked down quotations and publicized his work, earning fulsome dedications by doing so. His lively and spirited version contains colourful turns of phrase which sometimes expand the original, as when, in Book 1, chapter xviii, ‘des Loups-garous, des Lutins et des chimeres’ emerge as  ‘Larves, Hobgoblins, Robbin-good-fellowes, and other such Bug-bears and Chimeraes’ – a catalogue which, as Sarah Bakewell points out in her How to Live: a life of Montaigne in one question and twenty attempts at an answer  (Bath, 2011; LT.2011.x.3266) is  ‘a piece of pure Midsummer Night’s Dream’.

Shakespeare did in fact know Florio, and Bakewell speculates that he may have been one of the first readers of the Essaies, possibly even in manuscript form. Scholars have taken pains to detect echoes of Montaigne in Hamlet, which was written before the published translation appeared, and frequently cite a passage from his last play, The Tempest, which, as Gonzalo evokes a vision of civilization in a perfect state of nature, is strikingly close to Montaigne’s account of the Tupinambá, an indigenous people from South America whom he encountered when a group of them visited Rouen.

Letters should not be known; riches, poverty,
And use of service, none; contract, succession,
Bourn, bound of land, tilth, vineyard, none;
No use of metal, corn or wine, or oil;
No occupation, all men idle, all.

Montaigne remarks of the Tupinambá that they have ‘no kind of traffike, no knowledge of Letters, no intelligence of numbers, no name of magistrate, nor of politike superioritie; no use of service, of riches or of povertie; no contracts, no successions, no partitions, no occupation but idle; no respect of kindred, but common, no apparel but natural, no manuring of lands, no use of wine, corn or mettle’.

Such passages were eagerly seized upon in the controversy in the 18th and 19th centuries about the authorship of Shakespeare’s plays, and in 1901 Francis P. Gervais published his Shakespeare not Bacon: some arguments from Shakespeare’s copy of Florio’s Montaigne in the British Museum (London, 1901; 11765.i.18.). However, Edward Maunde Thompson countered with Two pretended autographs of Shakespeare (London, 1917; 11763.i.37), which argued that not only the signature ‘William Shakespere’ in an edition of the Essaies in the British Museum Library (but also that in a volume of Ovid in the Bodleian Library) was false, subjecting both to rigorous calligraphic analysis. Alleged signature of William Shakespeare on the flyleaf of The Essayes, or Morall, Politike, and Millitarie Discourses of Lo: Michaell de Montaigne ... Now done into English by ... John Florio. (London, 1603) C.21.e.17

Whatever the truth of the matter may be, we can make an educated guess at Montaigne’s response. An even-handed and balanced man who needed all his reserves of philosophy and Stoicism to confront the horrors of a century which saw the St Bartholomew’s Day Massacre and decades of conflict springing from religious extremism, he would no doubt have advocated a similar perspective on the resurgence of similar dangers in the 21st. And to those who argued about the authenticity or otherwise of these notorious signatures, he would certainly have recommended the phrase from the Greek philosopher Pyrrho which became his motto, engraved on his medallion:  ‘Epekhō – I suspend judgement’.