‘Of all fairy-tales, the most beautiful…’ Friedrich de la Motte Fouqué’s Undine

It would seem unlikely that one of the most ethereal creatures to capture the imagination of translators and illustrators in the nineteenth century should have been created by a Prussian officer and inspired by the writings of Paracelsus, the founder of the science of toxicology. Nevertheless, this was the pedigree of Undine, the heroine of Friedrich de la Motte Fouqué’s romance of the same name, who would inspire operas, ballets and numerous adaptations. Her elusive form can be glimpsed behind Hans Christian Andersen’s ‘The Little Mermaid’ and Dvořák’s Rusalka, a symbol of all that is mysteriously enchanting and ultimately unattainable.

Fouqué, born in 1777 into a family of Huguenot origins, was the grandson of one of Frederick the Great’s generals, and although he had not planned a military career he gave up his studies at the university of Halle in 1794 to fight in the campaign against Napoleon which ended in 1806 with Prussia’s defeat by the French forces at the battle of Jena and Auerstedt. However, the years which followed saw a remarkable renaissance in Prussia’s cultural and political life, and after the magical interval of seven years, Napoleon suffered defeat at the hands of Prussia and her allies in the ‘Battle of the Nations’ at Leipzig in 1813. Among the notable events of 1811 were the foundation of the new University of Berlin and the publication of one of the best-loved works of German fantasy and the only one of its author’s writings to be familiar to readers two centuries later. Undine appeared as the work of ‘the author of the Todesbund’, in a modest little book of which the British Library holds a first edition (Hirsch III.852). It contains no illustrations, but this lack would soon be made good by distinguished artists including John Tenniel (1457.d.19) and Arthur Rackham. Among the German artists drawn to illustrate the story was Ludwig Ferdinand Schnorr von Carolsfeld, in a series of twenty-two exquisite images. 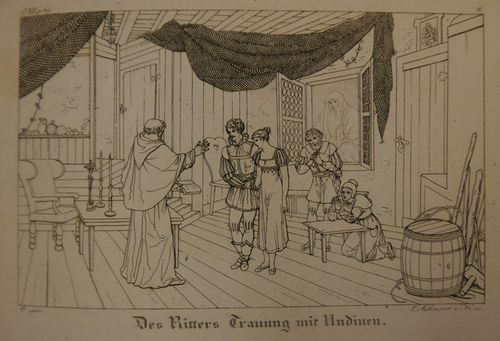 The legend was ideally suited to the taste of the early 19th century and to artists like the members of the Lukasbund, fired by ideals of mediaeval chivalry and craftsmanship. Like the French legend of Mélusine, it tells of a water-sprite, Undine, who can gain an immortal soul only through marriage to a mortal. Living under the care of a fisherman and his wife in a simple hut, she is discovered by the knight Huldbrand when he is on a quest in the forest to fulfil a mission for Berthalda, whom he has seen at a tournament and whose glove he light-heartedly requested as a favour. A fateful meeting with Kühleborn, the shape-changing guardian and uncle of Undine, sets events in motion; Huldbrand marries Undine, but when she reveals that Berthalda is in fact the daughter of the fisherman, tensions arise between the three, and Kühleborn emerges from the River Danube to snatch Undine to safety. Thinking that he has lost her for ever, Huldbrand prepares to marry Berthalda despite attempts to dissuade him, unaware of the terrible price of infidelity to his other-worldly bride.  Sure enough, when Berthalda demands that the castle well be opened to wash away the freckles that reveal her plebeian background, Undine appears from the depths to give Huldbrand a last kiss which proves fatal to him. 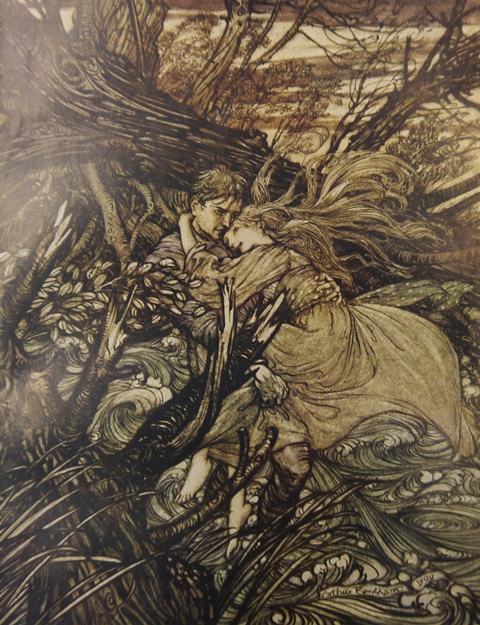 Within three years the story had been turned into an opera by E.T. A. Hoffmann, and in 1817 George Soane translated it into English, adapting it for the stage in 1821. In Vasily Zhukovsky’s Russian translation it became the basis for another opera by Tchaikovsky, and Margot Fonteyn created the title role in a ballet to a score by Hans Werner Henze (1957; Document Supply MUSIC W87/6573). Fouqué himself died in comparative obscurity in 1843, having lived to see Undine surpass all his other tales of the world of Norse mythology and mediaeval legend and become a bestseller throughout Europe.

Although, on the eve of St Valentine’s Day, this story may not appear to presage the happiest of outcomes, its enduring message of mystery and enchantment, which caused George MacDonald to declare ‘of all fairytales I know, I think Undine the most beautiful,’ is as irresistible as ever. 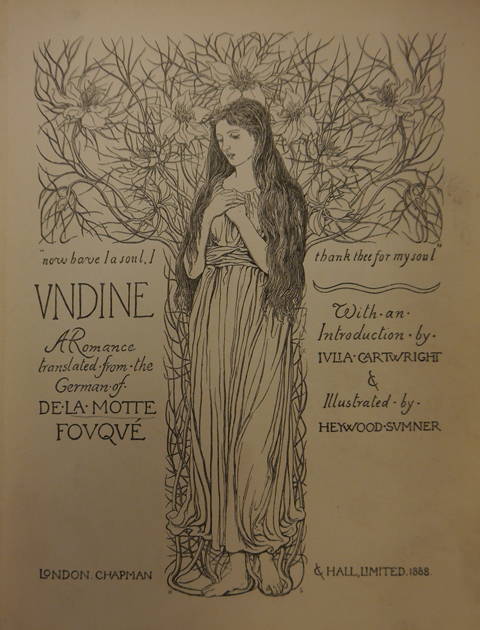